WSECU takes the fight to banks in a small but brave online initiative targeting college students called “What the B.” The campaign includes a microsite, blog and visits at college campus events. 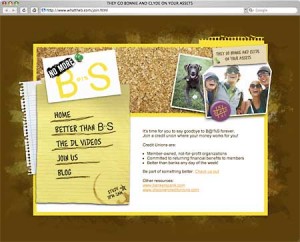 The campaign’s central creative hook centers on a playful-yet-derogatory portrayal of banks. For starters, the credit union has shortened the word “B-A-N-K-S” down to “B—S.” Ouch.

WSECU substitutes a bleep everywhere the word “bank” occurs in the campaign’s copy and videos. You’ll get the idea after you watch this YouTube video:

In addition to Nicole’s testimonial, there are three other videos to help kickoff the campaign, including “Tani,” “Stacie” and “Johnny.”

WSECU is holding no punches. They sling plenty of zingers at banks. For instance, they accuse banks of “going Bonnie-and-Clyde on your assets,” and “giving you the shaft.”

In an interview with The Financial Brand, Eric Jones, Marketing Project Specialist/WSECU, said the idea for WhatTheB was hatched “in a spontaneous moment between a graphic designer and a business development officer.”

Jones said the two were talking when one referred to a “credit union” as a “bank.” “’Hey, watch your mouth. That’s a four-letter word,’” one said to the other sarcastically. And the campaign took off from there.

The content was developed almost entirely in-house by WSECU, with some web support from an outside vendor. Four staffers shared responsibilities for development of the campaign. It took roughly three months to plan and launch the site.

Jones says WSECU’s CEO and board were cautioned about possible reactions to a tongue-in-cheek campaign, but they very much supported the idea of trying new things to connect with Gen-Y. WSECU was ready to take a chance.

“You can’t just put fresh paint on an old Model T and expect the varsity football team to start lining up for test drives.”
– Kristina Walters,
VP/Marketing for WSECU

“We wanted to do something radically different from our more traditional, conservative brand,” said Kristina Walters, VP/Marketing for WSECU. “You can’t just put fresh paint on an old Model T and expect the varsity football team to start lining up for test drives.”

Jones described WhatTheB as an experiment, saying it’s WSECU’s version of “dipping a toe in the water” to test social media as a member-recruitment tool.

As far as Gen-Y promotions go, the campaign has humble aspirations — nothing of the magnitude of something like Young & Free, a promotion so ambitious it’s got its own roaming Guitar Hero competition truck. With only a blog and a four-page microsite, WhatTheB should be relatively easy to manage, and a good way to “learn on the job.”

It does not appear that the WhatTheB campaign has been integrated into WSECU’s website. What would be really fun is if WSECU hotlinked the 20 or so occurrences of the word “bank” in its main website back to the WhatTheB.com microsite. Better yet, replace the word “bank” with “[email protected]%k” and hotlink that.

Jones says WSECU will continue working on WhatTheB through October when the credit union’s “Join and Get $25” student promotion ends.

In the meantime, WhatTheB’s blog will be fueled by a copywriter and a support staff member, but may be expanded, Jones says. WSECU has an advisory team of Gen-Y staff members who might be able to contribute to the blog and other member-facing parts of the campaign.