Westpac Bank in Australia took a plain-looking red booth, something it calls the Truth Pod, around to various locations across Sydney. People who ventured into the unbranded booth were asked what annoyed them about banks. Apparently, the answer was fees. Fees, fees, fees.

Westpac filmed the whole process and made a commercial out of it. It’s a little like conducting the research for an ad while making it.

Aussies vent their frustrations about banks in Westpac’s Truth Pod.
If anyone said anything other than “fees,” you wouldn’t know it by watching this spot.

The ad announces a new offer from Westpac where the bank will waive its $5 fee on checking accounts when you make at least $2,000 in monthly deposits.

The bank concludes the spot by making a rather unusual promise: “We’re lowering the cost of banking.” Maybe checking accounts with no monthly fee are somewhat of a novelty in Australia?


Westpac’s head of retail and business banking, Peter Hanlon, said the new ad campaign reflects the bank’s more customer-centric strategy. That may be true, but the fee-free checking account was probably planned well in advance of the ad itself. Even though it might look like the Truth Pod was used as a research tool that lead to the bank’s free checking product, the ad agency’s Truth Pod concept was probably just the creative approach used to launch the offer.

The idea of marketers using a confessional booth isn’t entirely new. As Charis Palmer over at Better Bank Marketing notes, the Truth Pod is pretty similar to JetBlue’s Story Booth which was used to gather customer feedback. The material JetBlue collected via the booth was then used in a series of advertisements for the airline. 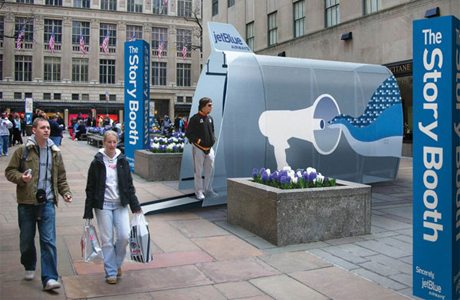 No one said you always have to be original and there are very few truly new ideas. Westpac’s use of its Truth Pod is one of the first — if not the very first — in the financial industry.

Ad Agency: Lavender* out of Sydney.

*The asterisk is part of Lavender’s name. According to the agency’s website, it means they “put consumer self-interest first.”