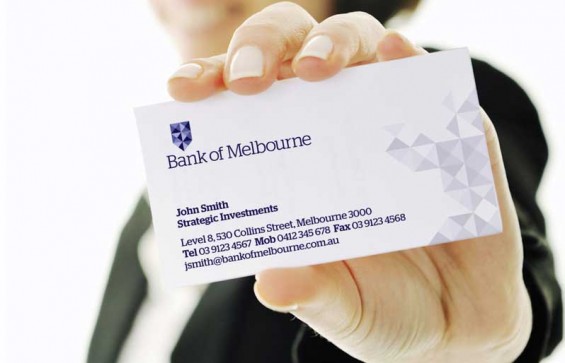 When Australian banking giant Westpac took over the Bank of Melbourne, they did what many banks do: They kept the old brand in place for a few years before replacing it with their own brand. But Westpac is doing something almost no one ever does: A mere seven years after pulling the plug on Bank of Melbourne, Westpac reversed course and reintroduced the regional brand.

Christopher Stewart founded Bank of Melbourne in 1989. Stewart sold out to Westpac back in 1997 in a deal worth $1.4 billion. Westpac kept the brand alive for seven years, but in 2004, decided to slowly phase out the Bank of Melbourne out over a two-year period, replacing it instead with another brand in the Westpac portfolio.

Back then, Stewart said, “It’s a pity the name has to go, but I think it was inevitable.”

Today, Mr. Stewart is probably quietly smiling to himself. The “one, big national brand” strategy didn’t work so well for Westpac, or so it would seem based on their turnaround.

Reality Check: Sometimes the brand that gets acquired in a merger is stronger than the one initiating the takeover. That’s how Bank of America came to be.

Admitting Mistakes Were Made 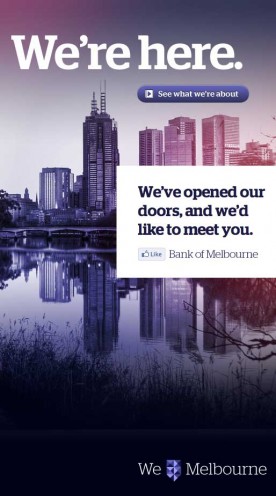 Work on relaunching the Bank of Melbourne began in 2009. That means it didn’t take Westpac more than five years to realize its mistake.

Michael Hughes, Director of Brand Strategy with Truly Deeply describes Westpac’s move to kill the popular Melbourne regional subbrand as “one of the worst brand architecture decisions in the industry.”

“This highlights an issue that often occurs in M&As where short-term cost savings drive decisions rather than considering the real impact of forcing brands to merge,” Hughes wrote on his company blog.

“You have to wonder whether they did a proper analysis of their brand architecture and had a real understanding of the value of each of their brands in the portfolio,” Hughes continued.

“But after so long, bringing the Bank of Melbourne brand back is a big gamble,” Hughes cautioned.

Nevertheless, Westpac will be spending $90 million reintroducing the Bank of Melbourne.

Westpac hopes the resurrected Bank of Melbourne brand will gain 9% of the lending market in Victoria. Ironically, this is just short of the old brand’s share before it was retired.

Designworks, the agency behind the relaunched Bank of Melbourne brand, says Westpac’s strategy called for “a bank focused on what regional customers value, a bank built and designed by Melbournians for Melbournians… with products and services tailored to the people of Melbourne and Victoria.”

Victoria, where Bank of Melbourne is based, is the second most populous state in Australia. 75% of Victorians live in Melbourne, the state capital and largest city.

Bank of Melbourne aims to exploit “a super local preference.”

Perhaps that helps explain why the bank’s identity draws on the back of the City of Melbourne’s own brand. There look-and-feel for the Bank of Melbourne clearly borrows shades and flavors from its namesake city’s image.

“It seems to take a conservative cue from the excellent Melbourne City identity created by Landor a year or so ago,” noted Demi Hawkins, Creative Director at Carnival Studio. 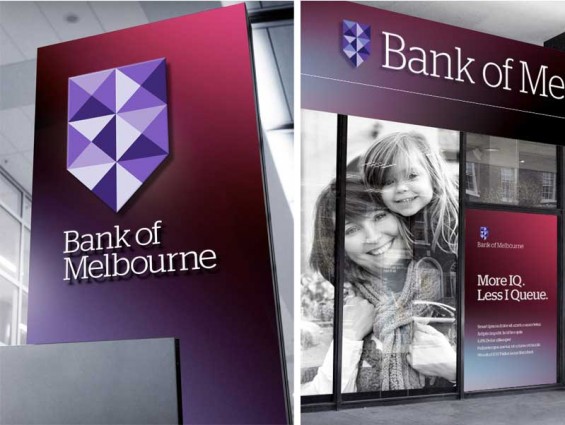 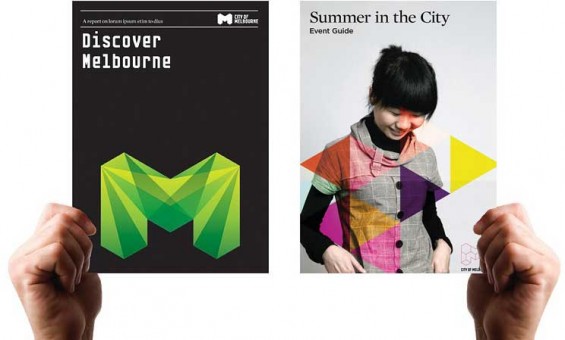 It’s a bit unusual — perhaps even controversial — for one agency to lean so heavily on another agency’s design.

Designworks obliquely acknowledges the city of Melbourne as a source of inspiration. “The shapes reflect the architecture of Melbourne — the Arts Centre and Federation Square,” the agency says on its website. “They also symbolize the elements that together make Melbourne great.”

For as ultra-local as Bank of Melbourne aspires to be, much of the copy in the new brand’s marketing materials has the familiar, bankerspeak phrases. For instance, the TV launch commercial makes implausible promises about the bank’s empathetic abilities:

Go ahead, it’s okay to roll your eyes. As hard as they are trying to say the bank is “your local friend who knows and cares about you,”  the hollow pandering just undermines the effort. It’s the kind of saccharine white noise people tune out when watching TV.

Key Questions: Couldn’t just about any bank say what Bank of Melbourne is saying in its marketing materials? What makes the messages unique to them? How do the messages reflect or support a hyper-local strategy?

Hughes at Truly Deeply is also worried the bank’s brand is too generic. “The launch campaign promises ‘mutual prosperity,’” he says. “It doesn’t really differentiate other than show plenty of clichéd shots of Melbourne.”