Cash mobs, a marketing phenomenon that took off about a year and half ago, organize groups of consumers who commit to spending a few dollars — say in the $20 range — all at one time at a small local business. The concept allows people to express support for shopkeepers in their neighborhood while giving a modest boost to the local economy.

Vancity and ATB Financial have pushed this basic cash mob model further, with a twist that channels profits into local charities. Both financial institutions have piloted what is accurately dubbed “Good Money Mobs.”

A Charity Twist on the ‘Good’ Strategy

Vancity’s “Good Money Mob” concept reflects the credit union’s broader brand strategy, best captured in this marketing catchphrase: “We make you good money by putting money to good.” Vancity translates this promise into concrete action with an impressive array of socioeconomic investments, all made at the local community level — in and around beautiful Vancouver, B.C. If there was ever a financial institution known for its connection to the community, Vancity is it. And it is this values-based banking model that Vancity used to construct its first-ever cash mob.

“For us, the idea of cash mobs spawned from a desire to create a movement for young people to get behind,” Stott added. “Something that demonstrates our ‘Good Money’ brand, and our sustainable banking business model.”

Vancity surveyed its Facebook fans to see which of three local businesses should be the beneficiary of the credit union’s inaugural cash mob, with a total of 894 votes cast.

The winner? East of Main Café, whose owners were thrilled when about 100 people turned out for the mob. In just a few hours, the business more than doubled the average night’s earnings.

And a third mob is just around the corner. 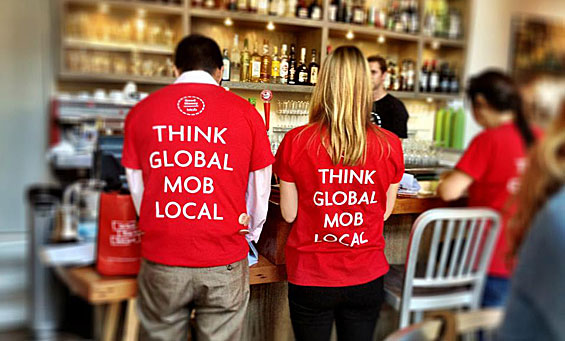 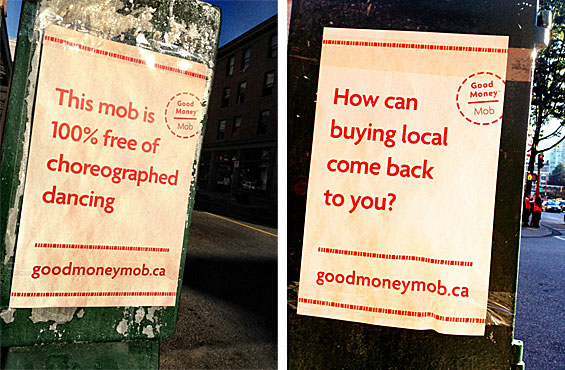 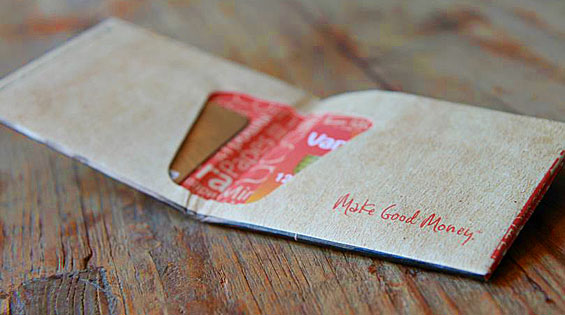 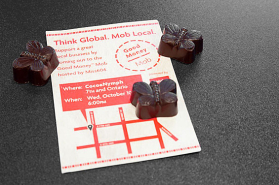 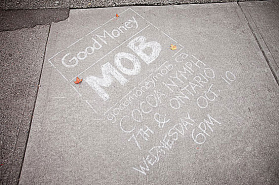 Doing Good in the Hood

Meanwhile, a thousand kilometers away in Alberta, ATB Financial held its own similar “GoodMob.”

“As you know, independent businesses often don’t have big marketing budgets to compete against larger industry players,” explained Shannon Pestun, ATB’s Senior Marketing Manager. “So creating a mob that encourages people to come en mass and shop at a predetermined time is a unique marketing ploy that helps expose independent businesses to new customers and create awareness in an interesting way.”

Pestun calls it “doing good in the hood.”

When the event was held, nearly 100 people (ATB calls them “mobsters”) descended on Reid’s of Calgary, a family-owned independent stationer. During the one-hour event, Reid’s almost tripled their normal sales for the same day and time — a common occurrence for cash mobs organized by financial institutions — equating it with “Christmas in July.”

After Reid’s, ATB’s cash mobsters gathered at the nearby Fiore’s Cantina, another locally-owned business, for appetizers and drinks dubbed “mobtinis” as part of the celebration.

In the end, both Reid’s and Fiore’s donated around $1,500 — roughly 20% of their cash mob proceeds — to the Janus Academy Society, a local school for autistic children.

Pestun pointed out two different ways cash mobs could be used for good: mobsters can buy items from a local retailer that they then donate to the charity, and/or the local retailer can donate a portion of the proceeds.

The kind of “brand activation” (as Vancity calls it) cash mobs generate does not produce a huge ROI compared to traditional forms of marketing.

“The impact that the cash mobs have had is a less tangible impact, such as quality brand engagement, which by itself would not produce a positive ROI compared to more traditional advertising mechanisms,” explained Sarah Stott, Marketing Manager/Vancity.

As a financial institution positioning itself along an ethical scale, Stott said Vancity tries to avoid the appearance of buying new members’ business with high-dollar cash incentives. Indeed, some might says a cash mob for charity is about as soft a “sell” as you can get.

According to Stott, Vancity uses its cash mob strategy to engage prospective members with the credit union in a positive way before asking anyone for their business. According to Stott, this approach “will attract more values-aligned and loyal members.” And she’s probably right.

Reality Check: While cash mobs don’t cost much in hard dollars, they still require plenty of human resources to plan and manage.

ATB says Friday is the best day for a cash mob. “We chose a Friday during the lunch hour for the mob so that we could encourage people to participate over their lunch breaks,” Pestun explained.

Based on ATB’s cash mob experience so far, Pestun says choosing the right retailer is critical. They picked Reid’s because the store had 6,000 square feet of space and sold a diverse array of products, ranging from pet products and baby items to writing instruments and photo albums — a good blend of gifts, impulse purchases and everyday items.

The store’s location is also a major consideration. How easily is it accessed? Is it convenient? Where will everyone meet beforehand? If the mob is going to roam from one location to another, the sites need to be nearby so people don’t get lost. And of course, the business has to be able to accommodate a large crowd which can arrive all at once. Extra cash registers, staff and crowd control are all important. Other things to consider: traffic patterns, public transportation, parking and the weather.

To crank up the PR machine, Vancity found that media camera crews were more likely to come by if the event was held during the 9-to-5 work day rather than after work hours.

Vancity also put up chalk drawings on the sidewalks around the selected businesses to drive local traffic to our Facebook page in the two weeks before the event. Pretty smart.

Asked about what lessons ATB learned while hosting its first cash mob, Pestun offers this advice: