Some use “unbanking” as a conceptual platform and wrap all their brand messages around it, while others use it to make a singular, standalone statement, perhaps just in a tagline.

“Unbanking” isn’t necessarily the opposite of “banking.” It’s a philosophical rejection of those (frustrating) things that often plague consumers’ banking experiences. In this day and age, when bankers are reviled more than big tobacco lawyers, it’s easy to understand why a financial institution would want to distance itself from the nasty taint of big banks. Many banks and credit unions looking to keep Wall Street at arm’s length simply go negative and bash the snot out of competitors. The message behind most anti-big bank campaigns isn’t more complex than “We don’t have a jet.” So what?

But “unbanking” creates this same kind of separation and engenders the exact same sentiment in a much more engaging, evocative and positive way. “Unbanking” lets a financial institution say “We’re not like big banks” without having to dwell purely on banking’s ugliness. And heck, let’s admit it…it’s just more fun than dragging the other guy down.

So join The Financial Brand, take a look at how a few credit unions using the concept of “unbanking” in their marketing.

Harborstone is one of the oldest retail financial institutions to use “unbanking” in its marketing, and quite possibly the first. The credit union first introduced the word back in 1993, then received an official USPTO trademark for “The Unbank” in 1994. If they wanted to, they could probably create a mountain of legal problems for any other financial institution who may be tempted to use “unbanking.” It appears, however, that as long as no one treads on their turf, Harborstone seems content to share its trademark with others.

The credit union still actively uses “unbanking” today. Its slogan, “Choose the Unbank,” is central to a current ad campaign, and they even have a microsite: choosetheunbank.com. 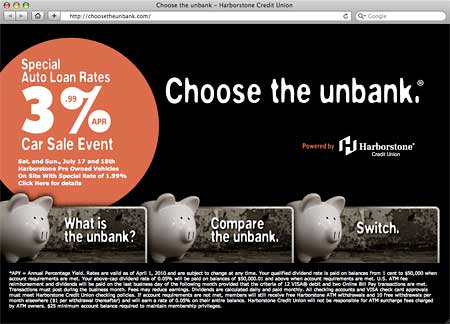 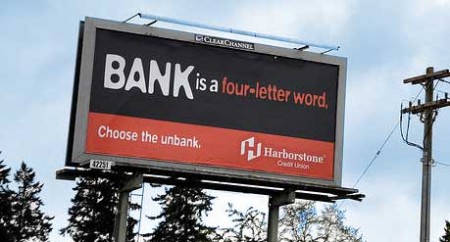 This credit union uses “Un-banking, Unbelievable” as a tagline that anchors all its marketing materials. But they didn’t stop there. Their entire creative platform is built around “un,” Headlines incorporate just about every “un” word under the sun: “Undeniable,” “Unmistakable,” “Understatement,” “Unexpected,” “Unshaken,” “Unsung,” “Unreal,” “Understood,” “Unafraid.” The ad agency, Third Degree Advertising, describes the work as “un-corporate, un-stuffy, and a little bit unexpected.” 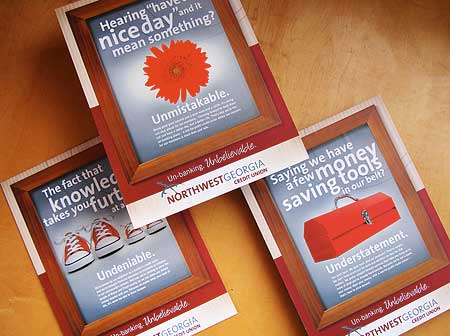 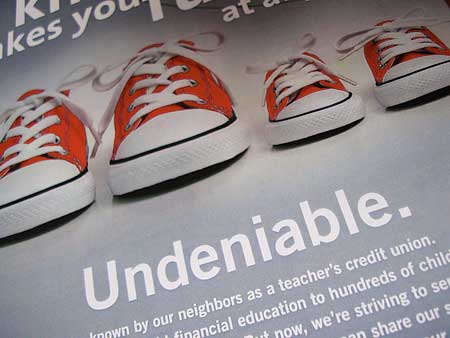 “From hard hat wearers to do-it-all homemakers. To say you work hard is an Understatement. So why are you playing games with a financial institution that doesn’t work as hard for you? Get Unstuck with a not-for-profit credit union that helps folks and families like yours to hang on what you’ve already hard-earned. Unbank with Northwest Georgia Credit Union. Where the difference is unmistakable. Northwest Georgia Credit Union. Unbanking. Unbelievable.”

This is another credit union that takes its unbanking seriously. They have an unbanking microsite (www.unbanknow.org), a toll-free unbank “emergency hotline,” and their slogan is “Unbank with us.” They have unbanking ads promoting Unbank Checking, call themselves “the unbank,” and have various unbanking messages splattered throughout their primary website. They even set out to recruit a Gen-Y summer intern with the lofty title “VP of Unbanking.” Note the use of a bloated, slab-face “U” as a graphic design element in some pieces. 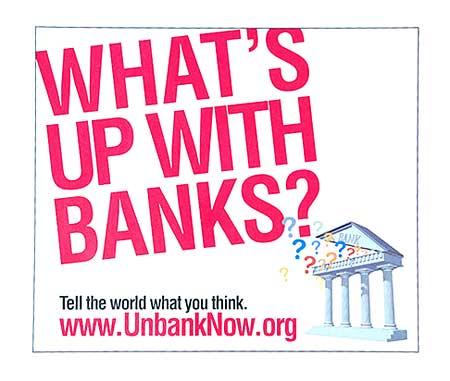 The first section in this credit union’s “About Us” page is a section titled “The Un-Bank,” where they define their unsurpassed experience, uncommon benefits, unbelievable convenience and unbeatable service. Fed Choice is also using the “un” concept in ads.

“Happy Un-banking” is the slogan this credit union uses to deliver marketing messages with a little levity. They have a design style and overall copy tone that appropriately matches their tagline. 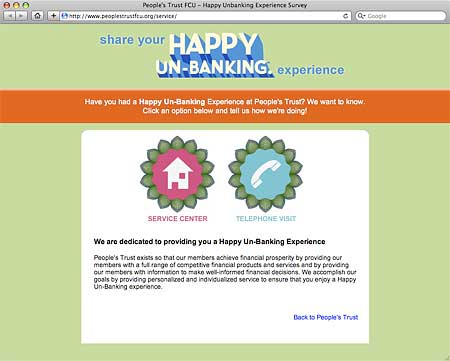 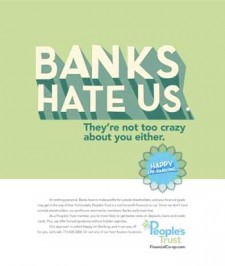 Fort Financial uses the tagline, “Unbank Your Life.” The credit union decided to secure an official USPTO trademark on the slogan in October 2009. Except for tacking the tagline onto marketing materials, it doesn’t appear that they explore unbanking and what it means in any great depths. 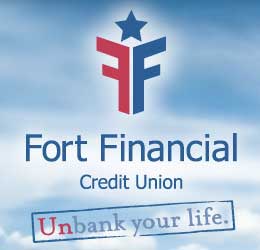 There isn’t much material from SkyOne available freely on the web, but the credit union is clearly taking the “unbank” message to the market. Using the tagline “Unbank Yourself,” SkyOne runs with the “un” theme in headlines, although they’ve added a twist. Instead of using the predictable “un” words, they’ve opted to coin some new and rather creative verbs. SkyOne’s loan offers invite consumers to “unhide the fees,” “unmuddle the terms,” “unlimit your rewards,” “unaccept excessive penalties,” “unhike the loan rates,” “unwaste your time,” “unpeddle the pricey extras,” “uninvolved the middleman,” “unraise your payments.” It’s a fresh angle and good copy. 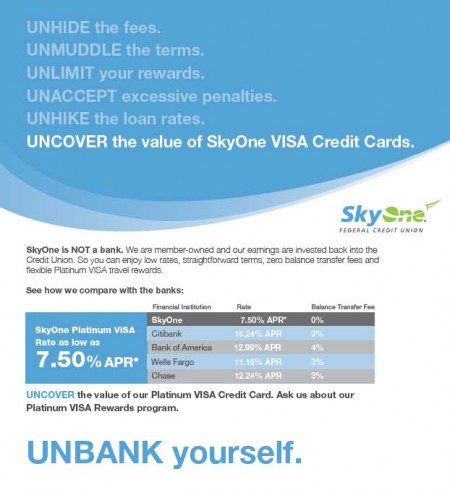 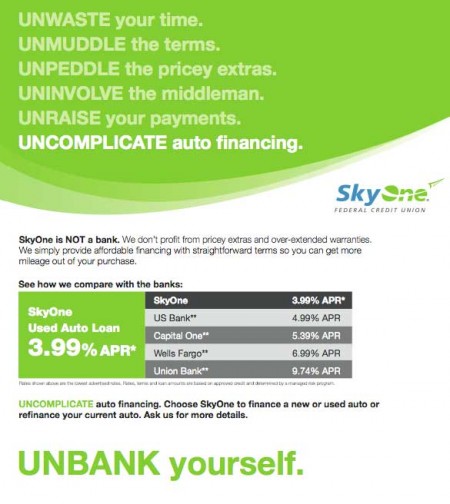 At one point in time, a company called Federal Savings used “The Unbank” as its slogan. Apparently they were indeed an “unbank”… they were fraudsters offering CDs with a bazillion-percent APY. 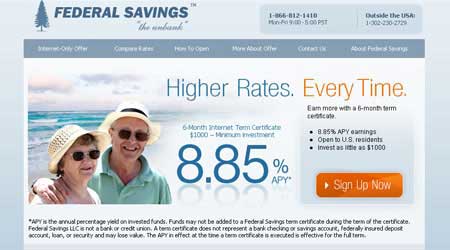 This Minnesota-based check-cashing store has been in business since 1984. You’ll notice in the photo below that it is right next door to its sister company, “The Unloan” store. It’s shocking that Harborstone Credit Union, who holds a USPTO registration for “The Unbank” would let this slide.

The much-coveted URL unbank.com belongs to a bank who couldn’t care less about the whole “unbanking” thing. University National Bank in Kansas has owned the savory domain since 1996. Some people might confuse this with the “U.N. Bank,” which doesn’t exist – the United Nations calls it the World Bank. There is, however, a U.N. credit union (unfcu.org).