In 2008, private banking giant UBS (formerly Union Bank of Switzerland), like pretty much every other bank on earth, was slammed by the subprime meltdown. But that year, the bank also became the subject of an embarrassing and unusually painful IRS tax probe. The bank was accused of helping American citizens hide an estimated $18 billion in 19,000 accounts from the IRS.

The result? Ultimately, UBS was forced to cough up the names of some of the richest people in America, shattering the highly secretive veneer of Swiss banks and ending the bank’s offshore banking operations for its US clients.

The whole episode left a big, dark stain on the once-venerated UBS brand. Now, the bank is trying to rebuild trust and restore its image with a massive new ad campaign. The new campaign, estimated to cost around US$20 million in 2010, is scheduled to run on TV, in print and online around the world.

Ads feature people who have achieved greatness, while also celebrating the people without whom success may not have been possible. 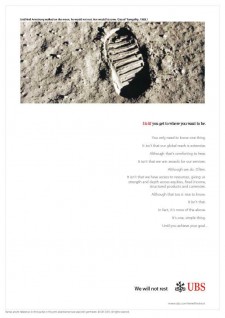 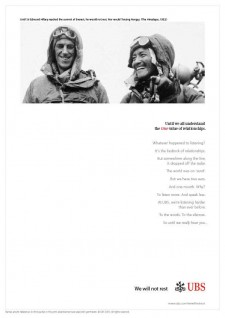 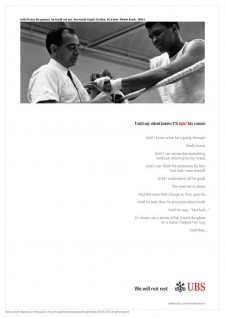 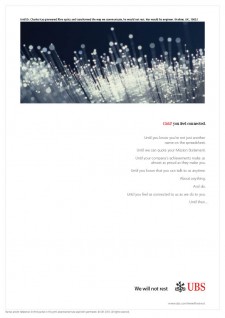 UBS – “WE WILL NOT REST” BRAND ADS

The accomplishments of notable legends like Neil Armstrong, Muhammad Ali and Amelia Earhart are used to draw an analogy between UBS and its “We Will Not Rest” message. 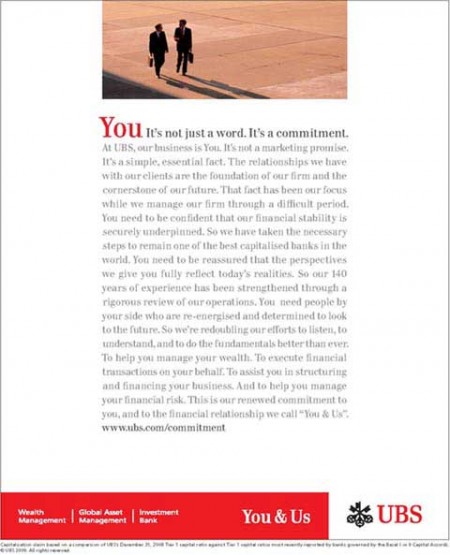 Back in 2009, UBS developed a “Manifesto” to communicate the actions the bank was taking in the wake of the financial crisis. But USB halted all advertising activities in light of what the bank calls “market challenges.”

“The tagline ‘We Will Not Rest’ sums up the philosophy we apply to everything we do,” UBS says. “It’s a promise to our clients to look at all the angles and be unwavering in our commitment to them, their success, and their financial future.”

According to the bank, the We Will Not Rest campaign “conveys the spirit of UBS at all communication levels: a tireless, relentless devotion to our clients.”

“It encompasses the spirit in which we approach everything we do,” the bank says. “It’s our commitment to client relationships, it’s understanding their goals, and it’s leaving no stone unturned and no resource untapped in our effort to help our clients achieve their financial goals.”

UBS is tagging its ads with a URL where visitors would supposedly learn more about the bank’s commitments. Unfortunately ubs.com/wewillnotrest is nothing more than two videos and a podcast, none of which shed any more light on what “We Will Not Rest” means. The bank would have fared better by simply using ubs.com in its ads instead of irritating people with a pointless URL that serves no purpose other than tracking hits generated by the campaign. 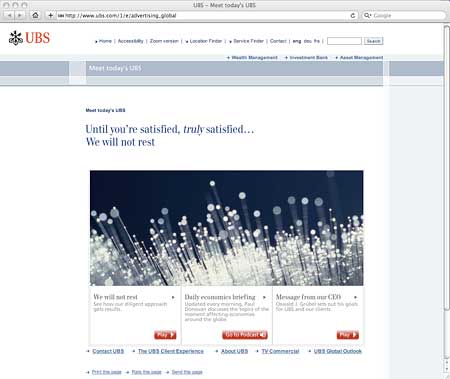 UBS – “WE WILL NOT REST” MICROSITE

You’d think you could find some more information about the UBS campaign here…but you can’t. The special web page is pathetically paltry — not even worth a visit.

In the campaign, UBS has completely glazed over the main issue that trashed their brand in the first place: the bank’s betrayal of its customers’ trust by compromising its vow of secrecy. Instead of tackling the problem head on, the bank is trying to soft soap its audience with a tired, hollow cliché that has been rendered meaningless by countless politicians. There’s even a video mocking Obama for the number of times he’s said “I will not rest until…”

Reality Check: If you undermine people’s trust, the last thing they want to hear is a saccharine platitude. Trust is not built — nor restored — by words. Even apologies don’t work; they merely make forgiveness possible. Trust is built one way and one way only: by actions, over time.

After taking a two-year hiatus from advertising, it’s hard to believe this is the best UBS can come up with — trotting out long-dead legends that have been used by hundreds of other marketers over the years? Apparently unable to find anything intrinsically unique about its own brand, UBS has resorted to drafting off the accomplishments of historical figures with rosier associations, coupling images with trite messages.

Bottom Line: This is a muddled, mushy strategy, and not one that’s likely to generate the results UBS is hoping for. If you want a taste of consumers’ initial reaction to the campaign, take a look at the harshly critical comments here at the Huffington Post. It’s not that UBS can’t- or shouldn’t be running ads right now…just not these ads.