Number of total employees: 170
Ratio of customers to employees: 324:1

Number of employees in marketing department: 5 (2.94% of entire workforce)

The social media strategy is just now being implemented. It is a hub-and-spoke type of strategy. There is a central hub that determines direction of the various teams as well as monitor and moderate posts through SocialVolt. Each team is platform-based. We have a Facebook/Google+ team, Twitter team, YouTube/Flickr team, LinkedIn Team, Blogging Team, and Blog commenting team. Each team is made up of 3-5 people from various departments — not all marketing. Each day the central team disseminates a topic for the various teams to engage about, and each team is responsible for posting and engaging depending on the platform. Through SocialVolt, Facebook, LinkedIn and Twitter activity is monitored and can be scheduled. Blogs are vetted ahead of time and blog commenters are all executive staff. Each team member is assigned an iPad to keep data secure and happy; none of the engagement is happening over our network, but through WiFi or 3G on their iPads. Measurements through SocialVolt include Facebook insights, share of voice, and other free tools.

How do you track marketing ROI?
It depends on the campaign/promotion. We’ve used year-over-year stats, we’ve used specific calls-to-action, like “bring this in” or “mention this ad.” We also use Google analytics to measure web based traffic.

Each promotion is reported to the board in terms of costs, results and comparison to year prior, or month prior, depending on the promotion.

Bigger campaigns are given status updates with monthly costs as well as overall costs and monthly side-by-side, year-over-year results. We report the success as well as those that weren’t so successful. That is important for transparency because not everything is going to work every time.

Favorite campaign?
Amy McGraw: I’ve been here only seven months, and my favorite has been the “Swipe Where It Counts” promotion we launched mid-October 2011 in response to BofA’s $5 debit fee announcement. For every five debit swipes (signature or PIN) the member receives $1, up to $5 a month for the first 6 months the account is opened. We put it together in less than 20 hours and it has become so popular it was made a permanent feature for all new checking accounts starting in March 2012. Members are still talking about it. 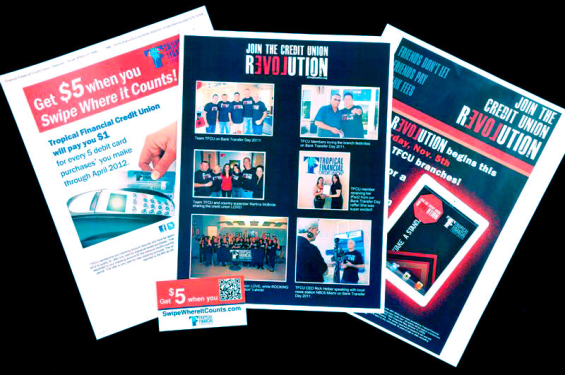