Earlier this week, SunTrust Bank unveiled a new brand tagline and marketing campaign focused on savings. The “Live Solid, Bank Solid” campaign speaks to what the bank describes as “a new era of thrift, security and financial responsibility.”

The new campaign is rooted in the notion that consumers are moving away from conspicuous consumption towards a more mature, solid approach to their finances.

The script for the TV spot reads, “Remember the Joneses? And all their stuff? And how people were always trying to keep up? Well, some of us woke up instead. We no longer want big and flashy. We want real, true and honest. We want to stand on solid ground, and we want a bank that does the same. A bank that’s here to help us prosper, whatever our definitions of ‘prosper’ may be. Live solid. Bank solid.”

Copy writing throughout the campaign is creative, direct and crisp. The messages reflect the new economic reality many Americans are facing. And it’s all delivered in a casual, confident manner.

SunTrust says it conducted months of consumer research prior to developing creative components. Among the findings:

“Consumers are thinking more about how they are handling their money than they were.”
— John Fitzgerald,
President/Mullen

“It’s apparent that consumers are thinking more about how they are handling their money than they were even six months ago,” said John Fitzgerald, president of Mullen, SunTrust’s ad agency. “They are moving to lives of more substance, reason, and long-term thinking, and feel a stronger sense of personal responsibility for the direction of their lives.”

SunTrust says the campaign was underway months before the economy took a nosedive.

SunTrust spent $26 million on advertising last year (excluding online), and $21 million through September of this year. 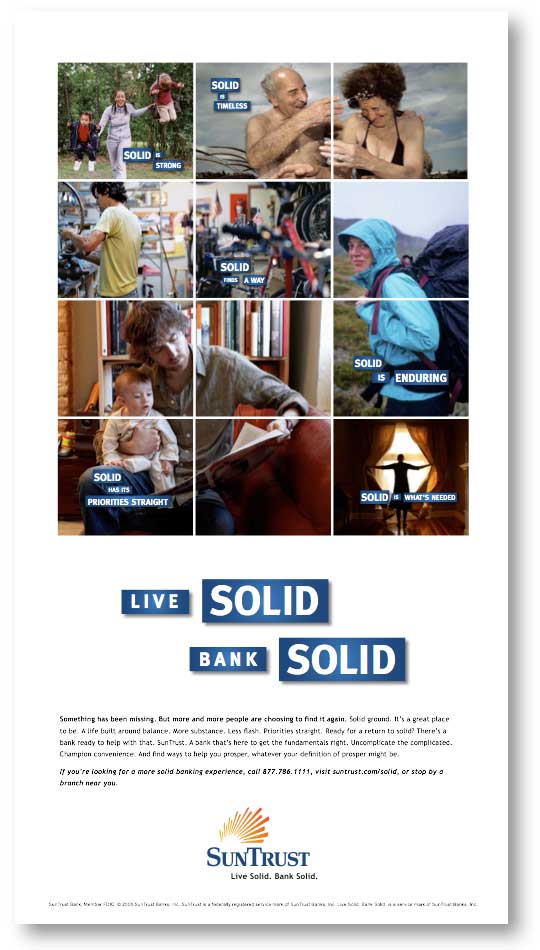 The ad’s body copy reads, “Something has been missing. But more and more people are choosing to find it again. Solid ground. It’s a great place to be. A life built around balance. More substance. Less flash. Priorities straight. Ready for a return to solid? There’s a bank ready to help with that. SunTrust. A bank that’s here to get the fundamentals right. Uncomplicate the complicated. Champion convenience. And find ways to help you prosper, whatever your definition of prosper might be.” 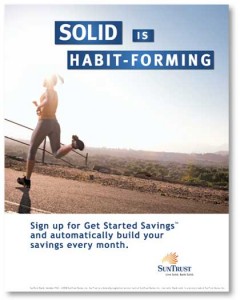 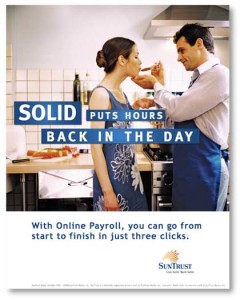