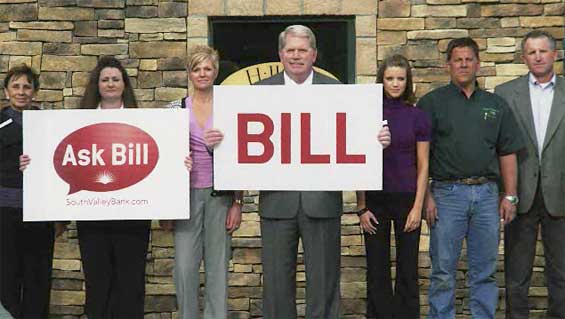 Bill Castle (pictured above), the CEO of South Valley Bank & Trust, is the star in the bank’s latest ad campaign, Ask Bill. Castle is stepping up to answer people’s questions — even the tough ones — to show that South Valley is a bank of integrity, honesty and reliability.

“There’s a commitment to respond to everyone within 3 days,” Ann Hall, VP of Marketing/South Valley Bank, told The Financial Brand.

Hall said she sits down with her boss (Bill) daily to review a log of customer questions, checking to see who is awaiting answers.

“We’d be dead in the water without follow-through,” Hall said.

Indeed when The Financial Brand emailed a question to Bill — “Where can I find your TV spots online?” — he personally responded within 24 hours.

All the Ask Bill campaign materials point towards South Valley Bank’s website, where you can watch seven initial video questions, presented side-by-side with Bill’s answers. Some of the questions might make your average financial institution wince:

The Central and Southern Oregon area where the bank is based has been slammed by the economic downturn — housing prices plummeted around 45% in some areas — so it’s easy to see how the public would be worried about these issues.

To create the video questions, South Valley had associates of The Mandala Agency, the bank’s advertising partner, read  questions real customers had sent in. The bank wanted to use different props and personalities to give Ask Bill character and make it more engaging.

South Valley’s Castle offers his responses with both aplomb and honesty, ranging in length from a half-minute to 3-4 minutes. He puts a positive spin on every subject, but there’s no harm in that. Who wouldn’t?

In the first two weeks of the promo, Bill says he’s received over 100 questions from customers, and he says he’s responded to everyone. Sometimes he emails people, writes them a letter or phones them personally.

South Valley says it has filmed at least six new pairs of Q&A yet to be posted to the web.

South Valley Bank & Trust has $864 million in assets and 23 branches in nine counties throughout Central and Southern Oregon.

The Financial Brand has written previously about the ethical questions that arise when agency staff present their work as content that has been crowdsourced from customers. In that article, a reader poll revealed that 42% of respondents believed it is okay to launch a crowdsourcing campaign “with a few ‘starter samples’ as long as you clarify who submitted what and why.” Another 23% said they wouldn’t be comfortable using fabricated “user-generated content” because it “doesn’t feel right.”

This is a different set of circumstances however. First, South Valley isn’t dodging tough questions. If the ad agency filmed themselves, so what? They certainly didn’t pitch the bank any softballs. Second, the questions are authentic; they come from real customers and reflect people’s real concerns.

Besides, it’s much more practical to have stand-ins read questions customers email than to ask people to create videos. Whenever financial institutions try to crowdsource videos from the general public, they invariably exclude a large portion of their audience. Only a handful of people are comfortable making YouTube videos.

Even though agency-created content falls into an ethically fuzzy category, South Valley’s campaign is ultimately noble and the bank’s interest in answering people’s questions seems genuine. They seem sincerely interested in giving people honest information about how their bank works. Overall, it’s a smart strategy: Position a smaller, regional financial institution as “a friendly neighbor in the community” by making their CEO more personable, more approachable and more accessible. People have a lot of financial insecurities these days, and what could make them feel more important than getting answers straight from the head honcho? 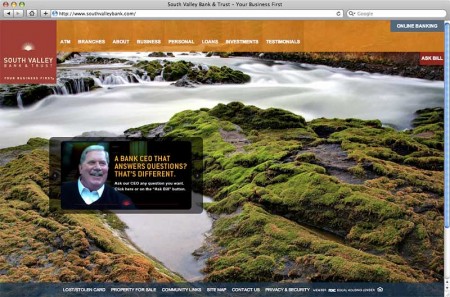 This website, which draws on the imagery of Central and Southern Oregon, is one of the most beautiful you’ll see in the financial industry. A simple banner ad on the homepage promotes the ‘Ask Bill’ campaign. There’s also an omnipresent ‘Ask Bill’ button dangling off the upper-right side of the main nav bar. 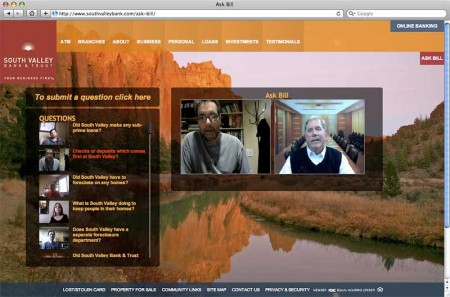 There are seven video questions posed side-by-side with answers from South Valley’s CEO, Bill Castle. It doesn’t appear that there are any written Q&As on the website, even though the bank has ‘Ask Bill’ forms in its branches and accepts questions via email. 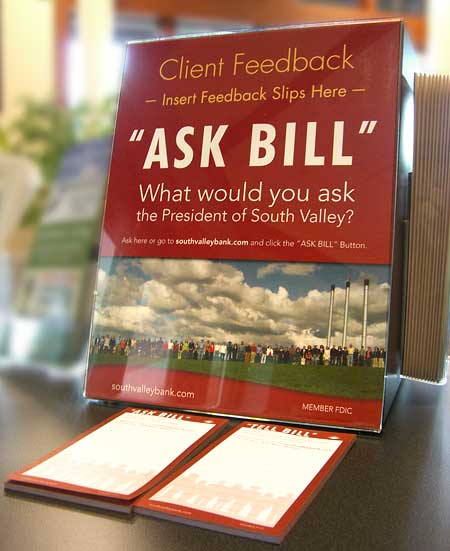 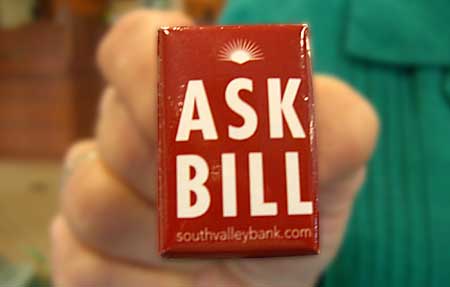 The campaign was supported with branch posters. There’s an ‘Ask Bill’ comment box (top) and lapel pin. There are also three displays with custom photos (below) to reinforce the campaign’s overarching “shoulder-to-shoulder” brand message.