Subscribe Now Get The Financial Brand's FREE Email Newsletter
A new ad campaign from SF Fire Credit Union is bound to shock many in banking. Not only does SF Fire call itself a bank, in effect, but it is now referring to itself specifically as a 'side bank' — a term with sexual undertones. What inspired this daring campaign? And, equally important, can it attract new members without turning off existing ones?

Before reading any further, watch the institution’s YouTube ad.

You may be thinking, “Wait, did I just see what I thought I saw? A credit union intentionally playing off sexual innuendo to market its brand?”

There’s a lot to unpack in that 30-second spot. Not least: How appropriate — and effective — is it for a traditional financial institution (or any business) to play off such a provocative message to build its brand? The Financial Brand spoke to the credit union’s Chief Marketing Officer Josephine Chew to walk through the campaign and explain how it came about.

We also spoke with marketing expert Josh Mabus, CEO at Mabus Agency, who talks candidly about his qualms with this marketing campaign and the implications of the ad on the credit union’s brand.

The “Side Bank Curious” campaign runs from Nov. 1 to the end of January 2023 on YouTube and other social media channels, as well as on Connected TV and the credit union’s website. In addition to filming the original side bank advertisement, Chew’s creative team also filmed a behind-the-scenes video, which will be shared on SF Fire’s LinkedIn page and other social channels. 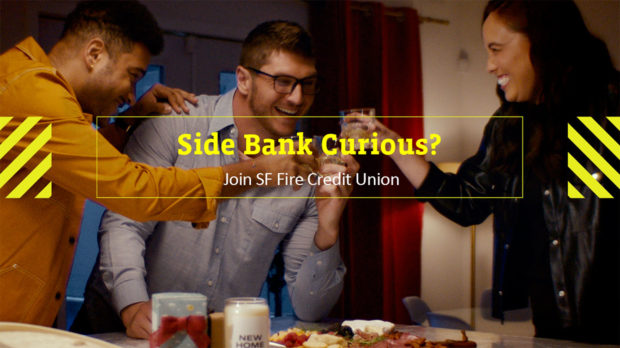 Where Did the ‘Side-Bank’ Idea Come From?

Chew’s excitement for the campaign comes from decades working at larger financial institutions — Wells Fargo, Charles Schwab and Visa to name a few of her past gigs — where her creativity was more restricted than it is now.

“One of the reasons why I’m enjoying myself is because I don’t have to go through so many people and layers,” says Chew.

Regardless, this ad — with its obvious sexual innuendos — surpasses just being “creative”. It begs these questions: How does an advertising campaign like this come about? What inspired it? Who suggested it?

As Chew explains it, the theme was a hit from the start internally. Her marketing team originally pitched her the idea of ‘#sidebank’, and it intrigued her immediately.

“I started laughing. It took me about two seconds and then I thought ‘Oh my God, I want to see what this is’,” she says.

There are multiple reasons why Chew and her creative team launched the campaign, but one integral component was the need for a new, innovative way to compete with the hefty marketing budgets of the megabanks.

Chew has only been with SF Fire since April 2022, but she quickly realized the issues she had at her big-company jobs weren’t the same ones she’d run into working as a CMO of a credit union.

“I don’t have a brand credibility problem now,” Chew says. “I have a growth problem and a brand awareness problem.”

Credit unions often struggle with brand awareness more than megabanks, or even just banks in general.

Even the existing brand of the credit union has been problematic. Chew is fresh blood at SF Fire, but the credit union is not new to the industry — with a history spanning over 70 years in northern California. Its reputation is longstanding as a credit union created for and by firefighters.

“It doesn’t help that our name is SF Fire, so everyone thinks that we only work with firefighters,” Chew states. She says this is no longer the sole culture of the institution, although it still remains embedded in the branding and the story of the credit union.

From concept to completion, the campaign took about four months and cost the credit union in the six figures. This is relatively cheap and fast for a campaign like this, Chew maintains.

Is The ‘Side Bank’ Campaign Replicable?

Not every financial institution marketing team can pull off a campaign like this even if they wanted to, let alone get such risqué ideas approved up the ranks. Chew attributes the success of this campaign to the open minds and receptivity of the institution’s executive team.

Undoubtably, countless other C-suites (conservative or otherwise) would discourage the idea — and suggest there is more to be lost than gained from such a campaign.

“When you become overly niche in any messaging, it becomes exclusive instead of inclusive.”
– Josh Mabus, Mabus Agency

Other legacy banks and credit unions — especially community-focused, family-first institutions — would also struggle with the risk of losing existing customers or members.

Josh Mabus’ first reaction to the ad follows that sentiment: It’s too specific and disorienting, even by 21st century standards.

“When you become overly niche in any messaging, it becomes exclusive instead of inclusive,” Mabus says. “Not only do I think they reduce the audience who’ll get the joke, but even some progressive folks will have a problem with the messaging. While open personal relationships are becoming more popular, I think it’s safe to say that most Americans would at least say they prefer monogamy.”

Chew acknowledges the campaign won’t be something older generations will be receptive to, but they’re not the target audience of this campaign. As she observes, the ad pushes the boundaries of comfort with all generations, but she anticipates it will perform well with adults in younger generations.

“People in that generation, they talk about these things all the time,” she says. “They think it’s really funny and they joke about it. For the older generation, this is like ‘What are you talking about?'”

To be a credit union is to expect to be misunderstood, or not understood at all.

Chew herself, although she has been in the financial industry for decades, wasn’t fully aware of the functionality of a credit union and the nuances between it and a bank before she started at SF Fire. This is a recurring issue, she finds, as many people don’t even realize most credit unions also have mobile banking.

This campaign, as she sees it, is SF Fire’s best shot at getting word out about not only itself, but credit unions in general.

“We end the spot with ‘side bank curious’, because we’re trying to introduce the notion of: ‘just try it,'” she explains. “We will demystify all your concerns.” She says the term may ultimately transition from ‘side bank’ to ‘side banking’, since that phrase is a universal way to describe the services both banks and credit unions offer.

The phrase 'side bank curious' is a tactic SF Fire Credit Union is using to broaden the idea that banking services are not exclusive to banks.

The ultimate goal is to spur a transitionary relationship where people will eventually consider SF Fire their primary banking provider. In the meantime, however, Chew is only looking to start with getting new members to test the waters, and see if a credit union works for them.

“It’s not like you have to move your whole life over,” she says. “The idea is that you can come over and try us — it’s very easy.”

Ultimately, Does The Side Bank Joke Work?

The campaign revolves around a joke, which in advertising almost always comes with the possibility of offense being taken by someone. Ads with sexual connotations are inherently riskier as they can quickly alienate people.

Mabus acknowledges the ad is a joke, but that — even after you recognize it as a joke — there are still some stark issues with it.

For one, the premise of the joke between friends is predicated on a strange idea: Should anyone advocate that a friend in an unhealthy relationship pursue an open relationship, instead of leaving their current partner?

“If a friend of yours was being mistreated in a relationship, would you ever recommend to them to get a sidepiece?” asks Mabus.

He also argues the shock value of an advertising campaign like SF Fire’s can detract from the brand of the institution itself. Instead, the jolt of the joke will be what sticks with prospective members. They’ll be less likely to remember SF Fire, or its unique brand.

Mabus acknowledges it’s a bold statement, especially on behalf of a credit union. But, there’s still something missing.

“It seems they’re progressive and open-minded,” he says. “I just wish they would’ve picked something that could have been just as creative and attention-grabbing that has a more positive association.”