RBC Bank is gearing up for March Madness with its Shoot for Loot promo where one lucky winner gets a trip for two to the 2009 ACC Tournament and a chance to shoot for up to $1,000,000 cash. The winner also gets tickets to all 11 games, complimentary accommodations and invitations to post-game coaches’ news conferences.

At the tournament, the winner will be able to show off their own hoop skills for a chance to win $1 million. This is the third year RBC Bank has sent fans to the tournament.

Here’s how it works:

RBC Bank is using the sweepstakes to draw extra attention to their MMA products. The bank is offering a special 2.25% APY on its MMAs as part of the promotion. 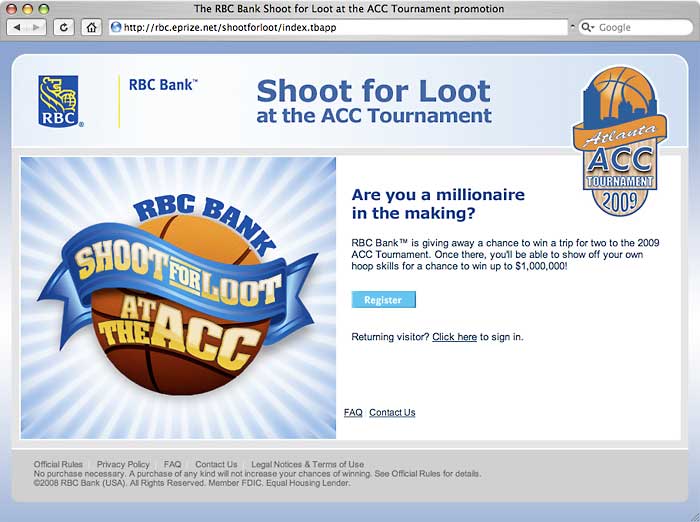 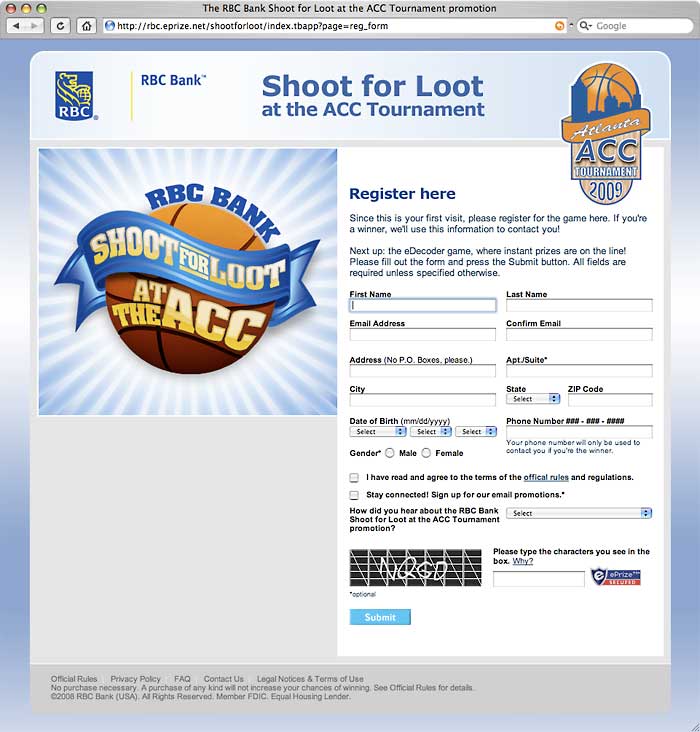 You have to enter your name, address, email address, phone number, gender and DoB in order to play.
This arms the bank with valuable MCIF information — and entrants’ consent to market to them further.

This is a brilliant marketing strategy. The $1,000,000 grand prize creates a big splash, but the winner would need to make a miracle basket to win it. The eDecoders drive traffic to branches. RBC Bank captures a ton of data about customers and prospects that can be used for direct marketing purposes. It doesn’t matter if product-uptake is low. The MCIF data alone makes this promo a winner.

Interactive promotions company ePrize is managing the online contest for RBC Bank. They have managed similar campaigns centered on “eDecoders” for both Fifth Third and Nationwide Bank.

RBC Bank, a division of Royal Bank Canada, is the 40th largest U.S. bank by assets. The bank has 440 branches.

Key Takeaway: Don’t use the term “March Madness” in your promotions unless you are an approved, official sponsor of the tournament (as RBC Bank is). The NCAA will sue you. And win. (FYI – Fees generated from the licensing of “March Madness” are used to fund college scholarships for Illinois high school boys and girls.)