If piggy banks weren’t dead at the outset of the economic meltdown, they were probably on their way. With the relative value of loose change dropping in the eyes of today’s youth, it looked like it might be time to say goodbye to good old Mr. Piggy Bank.

Then the recession hit. 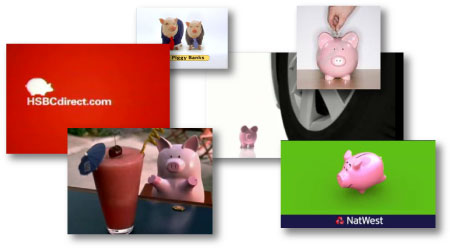 Now you have to wonder if piggy banks won’t come off life support. Deflation combined with a renewed focus on thrift will could give new hope for this venerable but weary financial icon. It could be a “Recession Resurrection,” kind of like layaway, which has also made a comeback recently.

It sure seems like you see piggy banks everywhere in the financial industry. Take these examples:

Maybe it’s time to stop exploiting the coin bank cliche, regardless of whether or not piggy banks remain relevant through a recession. Perhaps the ubiquity of piggy banks precludes their use? Maybe they’re just harmless creative representations fit for any financial marketer?

What do you think?