Subscribe Now Get The Financial Brand's FREE Email Newsletter
A monthly direct mail campaign introducing Liberty Bank to new residents moving into their market generates revenue from new customers at a rate of nine times what the program costs.

These days, digital marketing — in one form or another — is how financial institutions acquire new customers. But it’s not right for all situations. If you want to tell your brand story, then running display ads, paid search and email campaigns have limitations; these media channels don’t lend themselves to longer, more nuanced messages.

This limitation became readily apparent to us here at Liberty Bank as we considered how we could reach new residents who were moving into areas around our five Chicago-area offices.

New residents are especially receptive to new business relationships. Whether moving across the city or across the US, there’s a good chance they’ll want to establish new financial relationships. Years ago you could count on newspaper ads to reach them, but now prospects — particularly Millennials — don’t read papers.

The next question that came up as we developed our program for newcomers was deciding what to say. We wanted a message that established the bank’s brand and positioned it favorably against competitors. We wanted to communicate our message in a way that would grab the target audience’s attention, underscoring the brand position and competitive advantage we were trying to create.

Community bank marketers face tough challenges. Although consumers — including Millennials — prefer banking with smaller institutions, they invariably gravitate to the bigger national banks. They view smaller institutions as less tech savvy and less convenient — not necessarily true, but it’s the perception. Our job at Liberty Bank was to capitalize on people’s preference for small banks while also overcoming any negative perceptions.

So here’s what we did. We created a monthly direct mail piece that introduces Liberty Bank to recent movers. The cover of the 5 x 7 folded mailer communicates — through copy and illustration — a neighborhood bank, but with big bank technology. The colors, fonts and retro illustration have the cozy, reassuring look of a local institution with a 100-year history, which is in sharp contrast to the glass and steel structures of megabank brands. 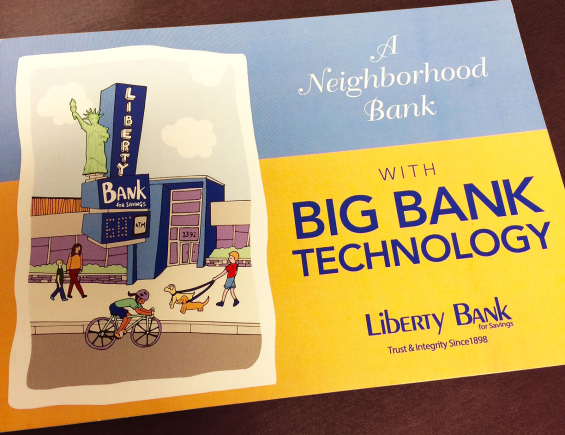 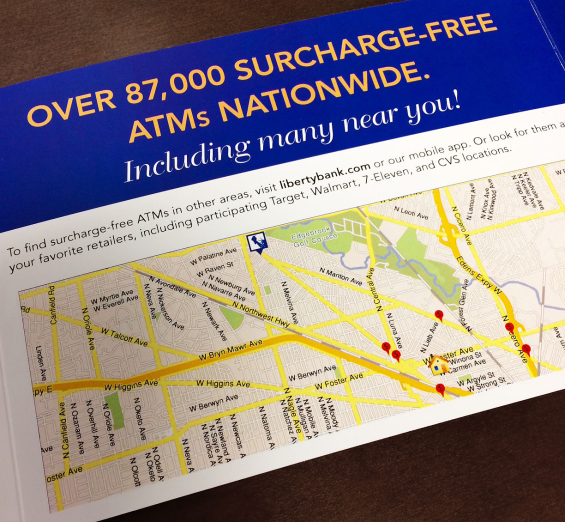 Inside, we went on the offensive, touting the 87,000 surcharge-free ATMs in our network. That’s twice as many as Chase and Bank of America combined, as we point out.

In each center panel — thanks to a bit of digital wizardry — we print a map of the area immediately around the resident’s home, and mark it with a handful of nearby ATMs. The personalization aspect vividly demonstrates the convenience of our ATM network. We also mark the closest Liberty branch, including a photo of the branch and the name of the manager. This is something any institution could do too, since most mailing houses can plot each individual household on a map and add ATMs, as long as you supply them with a list of locations.

The inside copy introduces the Liberty brand and expands on our technology claim by listing popular electronic banking features. We also include a die-cut, pop-out promotional offer for a checking product.

In the four months since launching the program, we’ve distributed thousands of mailers and established dozens of new accounts at a cost of $383 per account. Assuming a five-year lifetime (which we consider to be a very conservative estimate), total revenue from the accounts we’ve opened so far is estimated at $90,000 — nine times the program’s cost. And these profit estimates are based on initial deposits, and don’t reflect any growth in account balances or additional relationships.

We are looking into response rates around each office to determine whether expansion of the original list of newcomers beyond the original two-mile radius around the five branches would increase effectiveness.