These aren’t exactly the words a financial marketer hopes to hear when consumers describe one of their direct mail pieces.

But those are direct quotes NAB customers left on the bank’s Facebook page after they received the following message in their mailboxes: 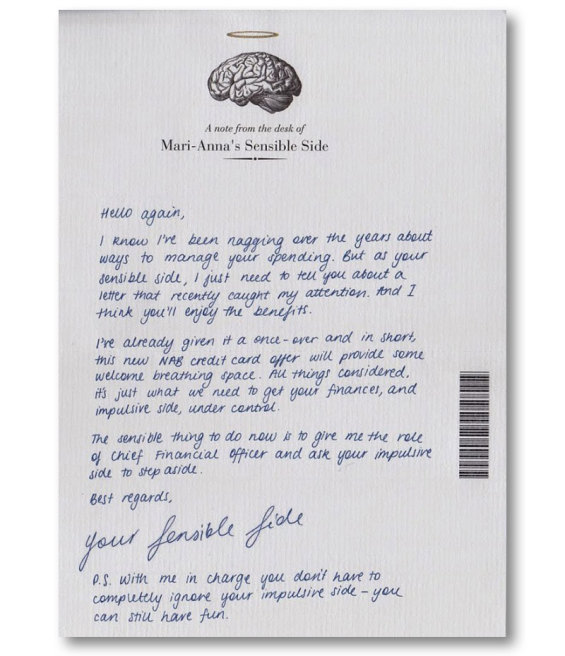 The marketing piece was presented as a handwritten letter, and personalized in a unique manner — i.e., “note to self.” It’s a clever way to get people’s attention, and a technique never seen before by The Financial Brand.

NAB’s credit card offer included a 0% balance transfer offer or a 0% purchase offer, along with a standard business reply envelope. A bar code tucked on the mailer’s right-hand side allowed the bank to track responses.

But it isn’t the offer nor the letter’s unusual execution that recipients took issue with. They didn’t care for the implicit message: use your credit card for whimsical purchases. And they didn’t hold back when they vented on Facebook. One customer described the mailer as “outright disgusting,” saying it “shows that financial institutions have zero care or sense of responsibility to their customers.”

Michelle Craik said she found NAB’s “marketing technique quite disturbing — appealing to my sensible side, assuming that I am dying to go shopping.”

“I was shocked to receive this letter,” Craik wrote on Facebook. “I thought it was disgusting, targeting people in this way! It’s immoral.”

Coralie Smith was a bit more lighthearted with her dig: “My sensible side tells me I should change banks.”

One recipient, a blogger/photographer, was so incensed that she penned her own handwritten reply back to NAB. “I am sure you were trying to be humorous, but frankly, I found it rather insulting!” wrote Mari-Anna Reiljan-Dillon in the letter, which she posted to her blog.

Many consumers critical of the campaign felt like the mailer’s tone and message labeled them as financially capricious, if not downright foolish and irresponsible.

“I find it insulting to assume that I have an impulsive side that I can’t control,” noted Mary O’Brien, another customer. “Don’t insult me if you want to keep my business.”

Some customers, like Peter John, suggested the bank’s attitude towards credit card debt was too cavalier, possibly even predacious.

“I think this is pretty grubby sales tactics given the economic climate and how hard many personal customers will be doing it at the moment,” John griped on Facebook.

In its defense, a NAB representative said the cross-selling campaign was sent to existing customers who had established a good banking history with the bank.

“While these customers have a mortgage and/or a transaction account with NAB, they don’t have a credit card and the campaign invites the customer to apply for one.”

“These invitations to apply are only extended to customers that we expect can manage that credit,” the spokesperson continued. “The creative execution of the campaign highlights the smart ways to reduce credit card interest.”

Some customers remain incredulous. “Very dismayed with the NAB promotion in my letter box,” wrote Jennifer Jones in a Facebook post. “It’s encouraging my sensible side to ‘reward itself’ by giving in to my impulsive side by getting a really expensive credit card. Annual fees $250?? No thanks!”

A credit union in New Zealand got itself in similar hot water with consumers with its “Lady Loans” campaign. Back in September 2013, NZCU Baywide launched the “Loans for Ladies” microsite, encouraging women to borrow between $1,000 and $50,000 for things like “an all-day makeover or a shopping spree.”

The campaign backfired with many consumers — mostly women — who hopped on social media channels to express their anger. Critics panned it as irresponsible sexism and insulting, lazy, misogynistic stereotyping.