The common argument from marketing executives who can’t give away $150 to each new customer is that consumers who jump at promotions are deal seekers and won’t be profitable. Is this true?

No. Attractive promotional offers motivate people to shop who are otherwise apathetic.

Over the last six weeks, over 9% of bank shoppers selected checking accounts because they wanted to take advantage of a promotion. Interestingly, these shoppers were more demanding and had more appealing banking profiles than shoppers who weren’t motivated by promotions.

In the first quarter of 2014, many banks launched aggressive promotion campaigns to win new primary banking relationships. For example, in some markets, Chase is offering $150 after you open a new checking account and begin using it. 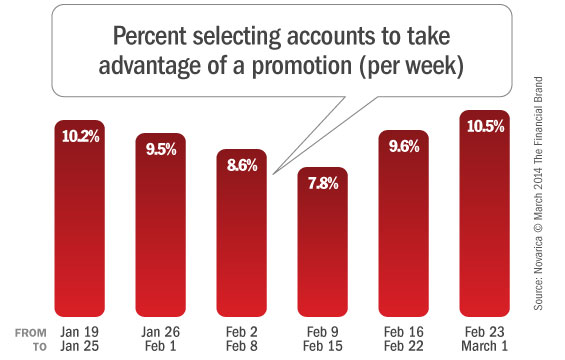 On FindABetterBank, shoppers aren’t presented with information about promotions. This forces consumers to evaluate institutions and products for their merits — without a bias for any promotional offer or deal. Once they’ve made their selection, the site prompts them about promotions. As a result, FindABetterBank can measure how much a promotional campaign lifts the performance for an institution. When a bank saturates a market with a promotional campaign, the site can also measure any uptick in overall traffic from that market. Here’s what this data can tell you about shoppers who take advantage of promotions:

Demand more features. Despite their elevated ATM use, those selecting accounts because of promotions are in-par with other shoppers in terms of their interest in surcharge-free ATM access and ATM fee rebates. However, they do identify more “must have” features than other shoppers. Many of these are value-add features like free printed checks and debit rewards cards.