When regulations in the US required banks and credit unions obtain customer consent before approving debit card transactions for a fee, many banks used aggressive campaigns encouraging customers to “opt-in.”

Success rates for these promotions are debatable. The Center for Responsible Lending says 33% of accountholders opted-in to overdraft coverage. The ABA says 46% of consumers opted in. Moebs put the number between 60% and 80%, with a median of about 75%.

Whatever the case, it’s clear that some significant segment of the population feels they need overdraft protection. And it seems to be paying off. Moebs predicts overdraft fees will hit $38 billion this year, an all-time high for the industry.

Overdraft Fees (in US billions) 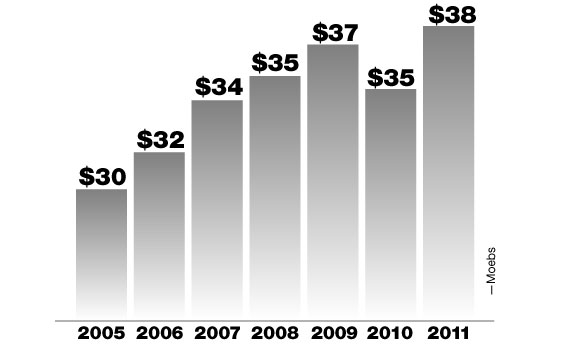 The Center for Responsible Lending accuses financial marketers of using scare tactics. Marketing materials reviewed sometimes gave the impression that urgent action was needed to keep the account working “like it does today.”

Some kicked it up a notch with shame and fear tactics:

In a study of checking accounts from the biggest US banks, Pew Charitable Trusts concluded that overdraft penalty fees were disproportionate to the size of the overdraft. When the median amount consumers overdraft is $36 and the median fee is $35, Pew said the APR equates to 5000%.

Pew advocates that regulators “require depository institutions to post deposits and withdrawals in a fully disclosed, objective and neutral manner that does not maximize overdraft fees, such as in chronological order.”

According to a study by Moebs, 44.3% of banks and credit unions made some type of change to their overdraft program in response to opt-in requirements. 55.7% did nothing. One in five increased prices to offset revenues lost from those opting out. 6.5% actually decreased prices for overdraft protection. Moebs said its data shows institutions that decreased overdraft fees either maintained or increased their overall revenue in the past year.

BofA eliminated overdraft fees on debit cards last summer because customers said they would rather have debit card purchases declined than pay a fee.

Moebs study revealed that almost all of those who averaged 10 or more overdrafts in a year opted in. JP Morgan Chase said that of those who frequently overdraw their accounts 53% have chosen to sign up for the overdraft coverage.

Moebs noted that about 90% of overdraft revenue comes from the most frequent users.