The merger between TD Banknorth and Commerce Bank means the name of ‘TD Banknorth Garden’ will probably have to change.

“For sure the ‘Garden’ will remain there, and what version of ‘TD’ goes in front of it is the question,” said Bharat Masrani, TD Banknorth’s chief executive. Good call, because Celtics fans might close their accounts if you messed with their venerable ‘Garden.’

Changing the Garden’s name could cost $1 million or more, and that’s just for signs and graphics inside and outside the building.

As far as the bank goes, you can probably guess what its new name will be, especially considering TD’s history with naming. (Hints: TD Waterhouse, TD Ameritrade, TD Banknorth, TD Canada Trust.)

Okay, enough suspense. The new moniker will be ‘TD Commerce.’ Jennifer Carlson, public affairs officer for TD said the bank’s branding team did a thorough analysis, deciding that combining ‘TD’ with ‘Commerce’ is “the best of both worlds.”

But hold on a second…

“We have no choice.
This is a tremendous risk.”
– Brian Thompson, CEO
Commerce Bank & Trust

“We have no choice. This is a tremendous risk to us,” said Commerce Bank President and Chief Executive Officer Brian Thompson in the Worcester Telegram & Gazette. “A name is everything in banking. It’s what you promote and it’s how you identify yourself.”

Commerce Bank & Trust has $1 billion in assets, 11 branches, and they’ve been around since 1955. Just the same, Commerce Bank & Trust would have a stronger case if they had a federally registered trademark on file with the U.S. Patent & Trademark Office. It doesn’t look like they do.

TD filed its trademark application for ‘TD Commerce’ on March 19, 2008.

The name change carries forward Commerce Bank’s slogan: “America’s Most Convenient Bank.” To support the tagline, TD is extending the hours of its Banknorth branches.

Also supporting the “most convenient” tagline is the newly combined branch network canvassing the east coast: 460 branches from Commerce and 600 from TD Banknorth. 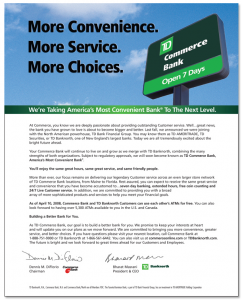 The Times Union reports that the bank will underake an interior and exterior “rebranding effort” at all of its 1,100 branches. The bank also said it will launch a multimillion-dollar campaign to introduce the new name to consumers, including television, print, online and in-store advertising.

TD acquired the New Jersey-based Commerce Bank back in November for $8.5 billion. Commerce has $48 billion in assets. TD Banknorth, based in Portland, Maine, has $40 billion in assets, and is a wholly owned subsidiary of TD Bank Financial Group of Toronto.