Mazuma Credit Union in Kansas wants to know, “What Are You About?”

From September 1 through November 30, people are invited to submit a 25-second video answering the question “What Are You About?”

At a microsite the credit union created for the promo, the credit union says, “Tell us what you care about, but do it in your own way. Your essence, your style, your sense of originality. Infuse your video with these qualities and you can’t go wrong.”

Presumably, the design of the promotional website is an intentional deviation from the more conservative look of the credit union’s primary website, in order to appeal to a younger audience: 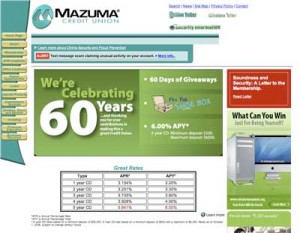 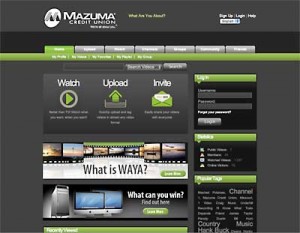 The main Mazuma website (shown left) and the “What Are You About” microsite (shown right).

The design of the microsite is nice, the interface is fairly intuitive, and the prizes aren’t shabby at all:

In a press release, Rob Givens, President/Mazuma, said, “The site is meant to open up discussion within Kansas City. We want to get in touch with today’s younger people in our community, to hear their stories and see how we can help.”

Currently, there are 48 registered users and seven video entries.

The most-watched video, “Mashed Potatoes,” has been seen 445 times. It’s like clay-mation, only it’s “mashed-mation.” A talking pile of mashed potatoes says, “I’m all about my masher.” The video’s creator also bought the URL mashyourownpotatoes.com which redirects to Mazuma’s microsite.

Not all the entries are quite so cheeky. Another video titled “Serve” is all about one person’s commitment to Jesus. It has been viewed 88 times.

Oddly, the videos are only available at the microsite and not on YouTube. Only Mr. Mashed Potatoes has uploaded his video there, where (at the time of this writing) it had only been viewed once.

Tip: Requiring registration to vote for videos is a good way to prevent entrants from “gaming the system” and voting for their own videos over and over. This also presents additional marketing opportunities.

To be eligible for the video contest, the contestants have to maintain a valid residential address in the Kansas City metro area and be 14 years of age or older at the time of submission. Official contest rules can be found at the promotion’s website.

Mazuma Credit Union has over 51,300 members and around $350 million in assets.

Beyond Marketing assisted with the promotion.