Subscribe Now Get The Financial Brand's FREE Email Newsletter
Many financial marketers lump everyone who makes more than $100,000 a year into the same bucket, but this is a mistake. Research reveals that mass affluent, high income consumers are far from a homogenous group. Targeting this lucrative market will require banks and credit unions to reassess their segmentation strategies. 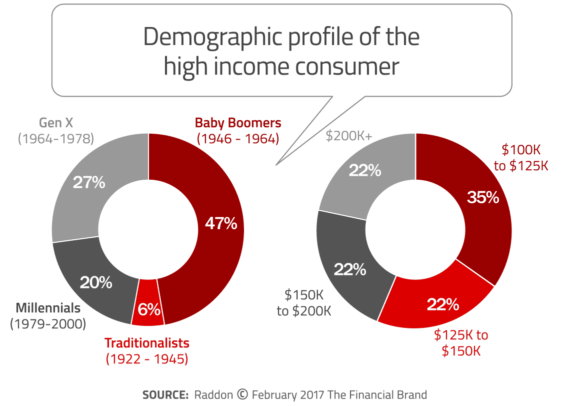 In Raddon’s research, roughly four out of 10 respondents say their primary financial institution is a major bank. But high-income consumers are 1.5x more likely to say they use a megabank as their PFI. Similarly, Joe and Jane Average are almost twice as likely as high-income consumers to indicate their primary institution is a community bank or credit union.

“Younger generations generally favor more flexibility and technology within their banking, so it’s no surprise they may be attracted to major banks that can provide them with the features or functionality they crave,” Raddon says in its report.

However, high-income consumers generally desire a financial institution they can trust — where they can grow their wealth and their financial knowledge, and where they feel they are known and belong. This poses a potential advantage for smaller community-based institutions banks who are better positioned to cultivate lasting relationships with this lucrative consumer segment.

A majority of the high income respondents in Raddon’s study (92%) said they own their current homes. One-third estimated their home values to be $500,000 or higher, and half said they have lived in their homes for more than 10 years. 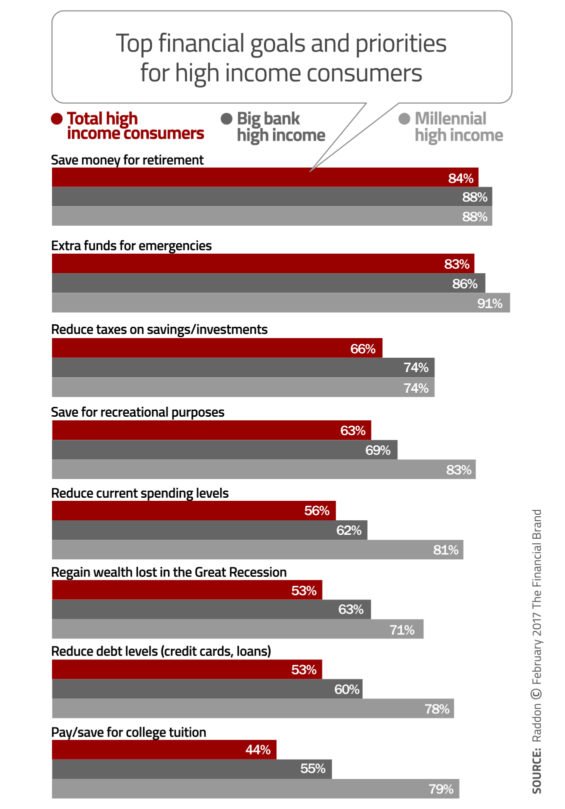 According to a 2015 online poll from the nonprofit American Consumer Credit Counseling, the main financial goal for American consumers in 2015 was to pay down their debt. In comparison, the top three financial goals for today’s high-income consumer are saving money for retirement, having funds for emergency situations, and reducing taxes. Slightly over half of high income consumers also want to reduce their current spending levels, suggesting a role for financial institutions offering budgeting tools and solutions.

The average U.S. consumer is more inclined than high-income consumers to bank online, use online bill pay and use debit or check cards. However, high-income Gen X and Millennial consumers are more likely to use digital banking channels than older high-income generations. 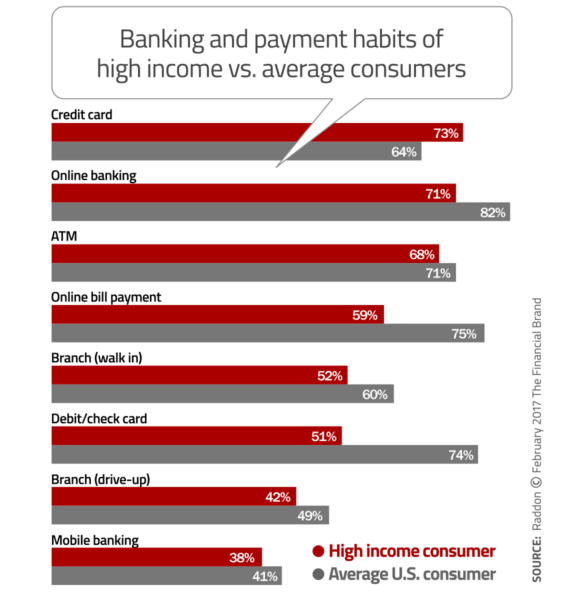 It’s important to separate the underlying motivations of credit card users in the average vs. high income segments. Average consumers are using credit cards more often because they need to, whereas high-income consumers typically use credit cards to participate in rewards programs (e.g., mileage plans).

The high-income market is not a homogenous consumer group. Based on variables including income, asset and debt levels, as well as comfort and trust levels, four distinct segments emerged in Raddon’s research, with differentiating attitudes and perceptions toward their financial providers and their financial behaviors.

1. High-debt, high-income. This sub-segment has no less than $200,000 in debt and a net worth less than or equal to $1 million. This group profiles slightly younger than the average respondent age and on average has $12.73 in loans for every dollar of deposits, retirement and investments. Compared to the total, the high-debt segment’s loan-to-deposit ratio is four times as large. From a behavioral standpoint, this segment is more likely to have a student loan, and the majority have primary investments. Expectantly, this group places a greater level of importance than average on managing or reducing current spending, reducing debt levels on loans and paying or saving for college tuition.

2. Low-asset, high-income. This group has significantly lower balance levels across deposits, investments and retirement savings. Also significantly lower is their average debt level, although they are most likely to have student loans. Despite their low debt levels, their loan-to-deposit ratio is equal to the total high-income sample in the study. This segment has a lower than average income level and slightly lower overall net worth. Due to the low balance levels, only about a quarter uses a primary investment advisor.

3. High-asset, high-income. These consumers are much more inclined to use a primary investment advisor compared to their low-asset peers, and their balance levels are roughly four times as large. The high-asset segment is less likely to be paying off a student loan compared to the high-debt or low-asset segments, and has one of the lowest average debt levels and loan-to-deposit ratios across the high-income segments (due to both strong depository balances and the lower debt levels).

4. High-net worth, high-income. They maintain no less than $1 million in net worth. They exhibit higher than average income levels and are the most senior in age of the four segments. As the title implies, this segment has the highest average balances for deposits, investments and retirement savings. Driven from those high balances, the high-net worth segment has the lowest loan-to-deposit ratio of all high-income segments, roughly 25 times lower than the total high-income loan-to-deposit ratio.

Based on the attitudes and perceptions gathered from the study, Raddon aligns the four various high-income segments it defined with the following corresponding strategic considerations: 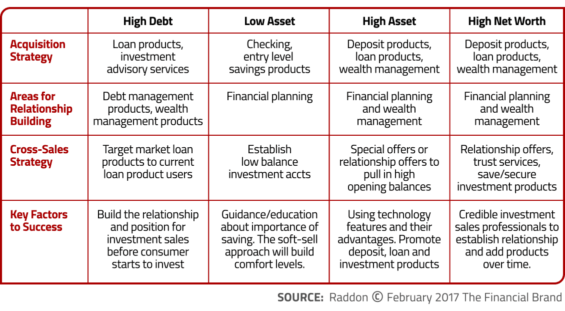 Raddon says it’s important to identify the high-debt, low-asset, high-asset and high-net worth segments of the high-income market. By understanding characteristics such as income, debt levels, loan-to-deposit ratios, spending and saving behavior, and comfort levels with various banking providers and their technology, financial marketers can segment the high-income market to more effectively service their needs.