Every spring, financial marketers across the U.S. wonder how they can tap into the fervor the NCAA’s “March Madness”  college basketball tournament. But there’s a right way and a wrong way to structure a March Madness promo at your bank or credit union.

Don’t use the term “March Madness” in your promotions unless you are an approved, official sponsor of the tournament. If you aren’t a sponsor, the NCAA will sue you. And win.

Starting in 2009, the NCAA started aggressively enforcing its trademarks, sending a flock of eagle-eyed lawyers out to scour the web for those who may be infringing on “March Madness,” “Elite Eight” and “Final Four” (“Sweet 16” was apparently untrademarkeable).

Nevertheless, every year a bevy of financial marketers unknowingly walk a legal tightrope:

It’s okay to use the idea of “March Madness” — using plays-on-words and the concept of brackets — just don’t use the actual trademarked term itself: “March Madness.”

Like 66 Federal Credit Union, for instance. Their “Battle of the Brackets” promotion is a standard “pick-your-teams” contest awarding a 60” HDTV. The promotion is topical, the contest is familiar and the prize is relative — without creating any trademark risks. 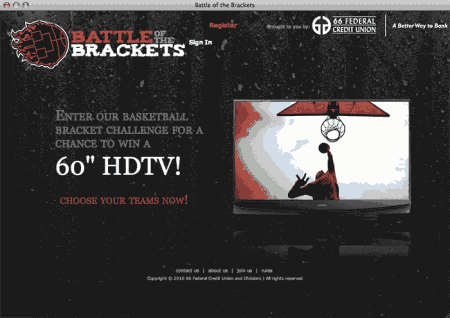 Then there is FirstBank, who is running its ad for “Bank Merger Madness” in the Denver Post, right next to the article announcing first round match-ups in the basketball tournament.

With no copy other than the tag, “Independently owned since 1963,” the ad is meant to remind Colorado banking customers that FirstBank is not seeking to buy, or be bought by, any other bank. It will appear once, on March 15, before any games, and again on Thursday March 18, before any of the 32 first round games. In both cases placement will be directly adjacent to the newspaper’s editorial NCAA bracket chart. 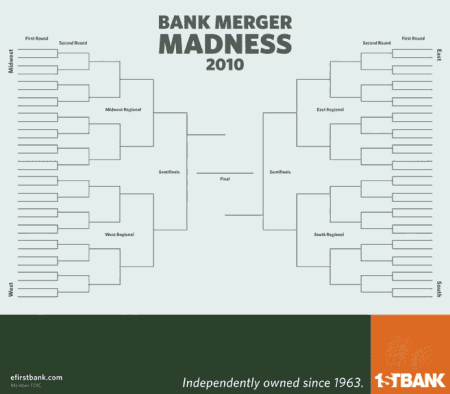 FIRST BANK – “BANK MERGER MADNESS”
An ad in the Denver Post running opposite an article on the “March Madness” contestants. The ad was created by TDA Advertising & Design. 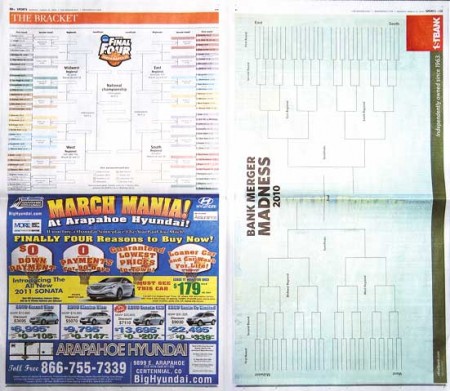 DENVER POST – “MARCH MADNESS LAYOUT”
Hats off to the media planners at TDA Advertising & Design for working so closely with the Denver Post on this clever ad placement.