Subscribe Now Get The Financial Brand's FREE Email Newsletter
A new online-only retail bank is threatening to revolutionize the financial industry. Sure, they have some cool tools, a slick interface and an alluring brand. But are they “the bank of tomorrow?” Or just a different flavor of a dish consumers have already been served?
Subscribe Now!

When telling the story of how Aegon NV spawned a new internet bank dubbed Knab, you have to start with the name. So why “Knab?”

“Because we like to turn things around… literally,” the bank explains (with some delight).

It may sound like a playful whim, but Knab founder and CEO René Frijters is far from joking. In fact, he’s dead serious about his vision for banking, and says he wants his new bank to take the ethical high road. He vows to be completely transparent with fees, and describes Knab as “socially conscious,” encouraging customers to allocate part of their savings to select charities.

“Real change can only be achieved by starting all over,” he says nobly of Knab’s “dnarb ygetarts” (that’s Dutch for “brand strategy”). “Knab turns things around and makes for a revolution in financial services. Knab listens, offers innovative solutions, and makes banking easier and more fun.”

Frijters says the bank’s unusual name reflects its customer-centric model. The Dutch word for customer is “klant,” which Knab says is represented by the initial “K” in the beginning of its moniker. It’s a nice story, but this rationale was almost surely reverse-engineered after the Knab name was selected.

Personal financial management (PFM) tools lie at the heart of the Knab concept. Knab customers are given a single digital dashboard that presents them with a comprehensive view of all their payments, checking, savings, loans and retirement accounts — including those held with other institutions. It’s this information that gives Knab’s platform its power. Customers are given a range of options — everything from tailoring personalized account alerts to crafting a holistic financial life plan.

A very visual — and attractive — PFM interface is the centerpiece of Knab’s concept. The Figlo platform is used as the backbone of Knab’s PFM and financial planning system.

One highlight of the Knab’s suite of PFM tools is the “Red Line” app, designed to help customers manage overdrafts. When purchases and scheduled bills exceed money available in the current account, the app shows the customer how far “in the red” they’ll need to go to cover expenses. Customers can only be “in the red” for a the amount of credit they specify, or the amount in the savings account selected for overdraft reserves.

For customers choosing to build an investment strategy through Knab’s PFM platform, the bank promises customers completely independent and unbiased financial advice, and this is more than just lip service. Indeed the bank has no sales reps.

“We consciously decided not to employ any sales agents ourselves and to work instead with independent financial experts. We audit their quality and customers can also rate them. In this way our clients receive the advice that is best for them rather than what is best for the bank,” says founder René Frijters

Advisors must be prescreened and approved by Knab before participating. Selected asset mangers have access to a podium on Knab’s website, but are removed if their customer rating falls below par.

Knab asserts the impartiality of its financial advice with pride: “Our bankers take the interests of clients in mind, speak for themselves and take responsibility for what they do.” 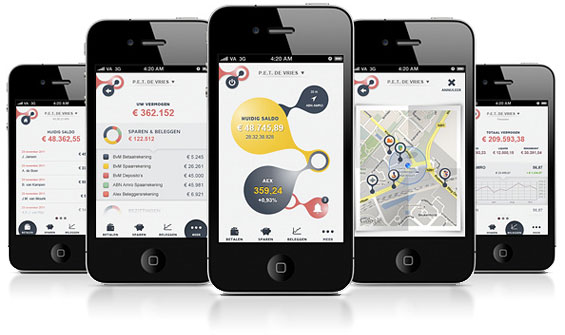 Is the Price Too High?

Knab will be charging customers €15 per month, or about USD$20. That works out to €180 annually — nearly $240. Experts on the Dutch banking landscape are worried this may be too much for consumers to bear, no matter how cool/different/new Knab may be.

“In the Netherlands, we are not used to paying much for banking services — at most, maybe €20… per year,” says Peter Verhoef, Professor of Marketing at the University of Groningen. “Whether customers will pay up remains to be seen.”

By comparison, a basic account at ING costs €3.75 euros per quarter (USD$20 annually).

But Knab staunchly defends its pricing scheme, saying that Dutch consumers lose on average €260 per year to hidden fees paid to other (ostensibly “cheaper”) financial institutions.

Will Knab’s value proposition pencil out? CEO Frijters says the bank will break-even in five years if it can reach 100,000 customers, but he hopes to see 250,000 customers by that time. 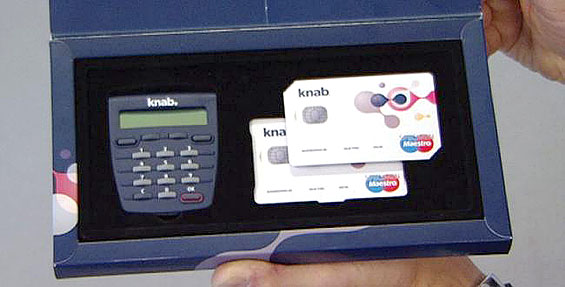 New Knab debit cards arrive in a nicely designed package complete with a gift calculator. This beats the unceremonious plain paper wrapper that delivers most banks’ plastic products — by a long shot.

For virtual banks like Knab, getting by without any branches ramps up the pressure on their online delivery channels.

The bank created what it calls a “digital office” called “My Environment.” The secured ‘My Environment’ closed portal gives customers the ability to live chat with Knab service/support experts and talk with independent financial advisors. Customers can also video conference with Knab employees via webcam. 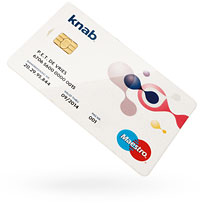 b actively solicits customer feedback and input. “This can be done through Knab Live, our online platform for suggestions, ideas and criticism from customers,” the bank explains. “We also hold regular sessions in which we work with clients brainstorm about our future.”

Christophe Langlois at Visible Banking has noted all the various ways Knab tries to connect with customers and keep them in the loop, including an Innovation Lab, a blog, Facebook, Twitter, YouTube and LinkedIn.

Since launching, Knab has accumulated 525 ‘Likes’ on Facebook, and 846 followers on Twitter while sending 491 tweets. The bank employs a team of five service reps to handle its social media accounts.

The Bank of Tomorrow? Or Like Other Banks We’ve Seen Before?

Knab describes itself as “the bank of tomorrow,” but not everyone is impressed with the “new” Knab model. Some say it isn’t really any better or different than other European online banks like Fidor, which many herald as the best around.

“Knab is in no way revolutionary or game-changing,” complains Ronald Mulder, a management consultant from the Netherlands. “On the contrary, Knab looks just like any online bank. Nothing on the website communicates that Knab is different, except form the slogan: ‘Knab, not just any bank.’”

“Knab gives you some neat looking online tools, but they come at a price — €15 per month, and that’s quite a lot for an online-only bank,” Mulder continues. “The tools and apps are just the sauce over an otherwise standard banking product. Knab is just another bank, albeit with a better user interface.”

Mulder compares Knab against Simple, who he says really redesigned the entire banking experience from the ground up so much so that that aren’t even technically a bank.

A Dutch consumer watchdog group bluntly states that “KNAB offers an online financial plan, PFM tools and a mobile app, but in return, you pay a heavy price for your checking account.”

Another concern raised by some observers include those about Knab’s parent, Aegon NV, a financial giant that hasn’t fully endeared itself with consumers. Some say Knab’s €15 monthly price tag is nothing more than a money grab cloaked in a dazzling marketing package.

And then, of course, are the interest rate haters. There’s always some vocal segment eager to deride banks’ savings rates, and Knab is no exception. By pricing themselves at the lower end of the interest spectrum, Knab has exposed itself to a level of criticism that a nascent bank doesn’t need.