During a couple days in late August, banks and credit unions — normally bitter enemies — teamed up in for a marketing campaign to give away over $150,000 in gas to consumers in nearly 40 cities across the country, spanning from Boston, Massachusetts to Portland, Oregon.

Each participating financial institution — 15 banks and 17 credit unions — gave away roughly $4,000 of gas in a rare moment of unity, brought together under the Kasasa checking account brand.

The offer was limited to $20 in gas, available to the first 200 people that showed up at the preordained gas stations between 9:00 and 11:00 am. 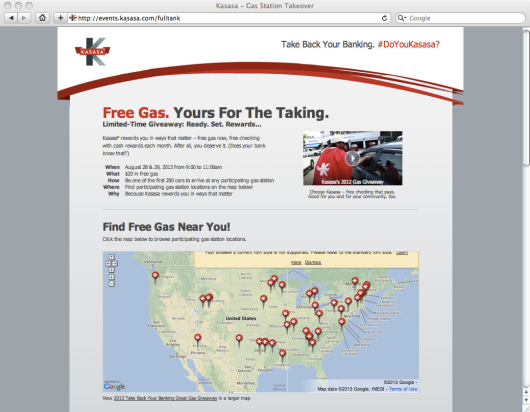 Kasasa made a special page on its website showing consumers all the gas stations across the country where they could participate in the free giveaway.

Kasasa, for those who don’t know already, is a turn-key checking product from Bancvue that offers consumers perks like free iTunes and ATM refunds. The program, available to both banks and credit unions, provides a standardized product and a ton of coordinated marketing support — all for a preset fee. It’s an offering that’s proven popular among small- and medium-sized, regionally-focused financial institutions (e.g., community banks and credit unions). Indeed Kasasa has taken a decidedly anti-big bank position in most of the marketing themes its run with.

“One of the biggest benefits to offering Kasasa is that that community financial institutions get to participate in unique, nationally scaled marketing campaigns and have access to creative agencies and industry leading research that they wouldn’t be able to afford on their own,” notes Gabe Krajicek, CEO of BancVue.

This is the second year financial institutions participating in the Kasasa program have hosted such an event. In 2012, the stunt helped Kasasa community banks and credit unions secured invaluable media exposure on both a national and local level.

To market this year’s event, Kasasa supplied each financial institution with on-site marketing materials, including flyers promoting the giveaways and signage for gas stations. Kasasa also organized what it describes as “a hyper-local social media campaign.”

During the gas giveaway, each financial institution collected marketing and demographic data from consumers taking them up on the offer (name, email, phone, etc.).

Kasasa secured numerous pre-event broadcast interviews for community bank and credit union representatives on morning shows the week of the event, as well as pre-event radio and print interviews. Most of the events had multiple broadcast stations in attendance.

Bancvue says it is currently evaluating the media impact of this year’s Kasasa gas giveaway event, saying it expects full results by the end of September.

The 2012 gas giveaway generated a fair volume of PR, even though it involved half the number of marketing that this year’s event did. In 2012, Bancvue estimates the gas stunt generated 33 million impressions worth roughly $1 million. 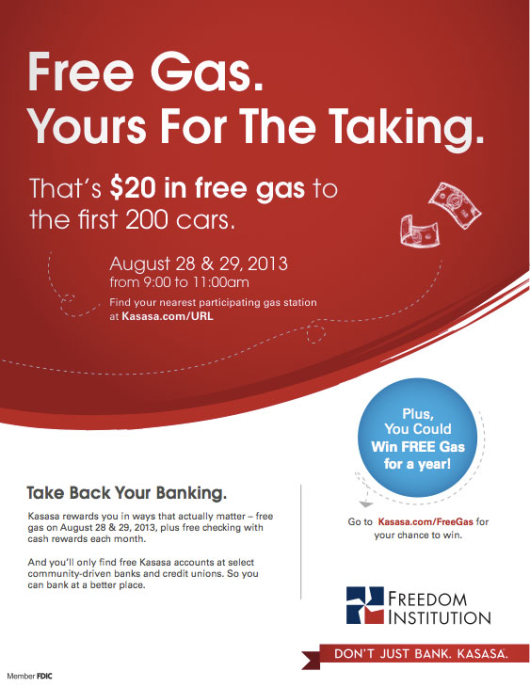 T-shirts for staff manning the gas stations during the event. 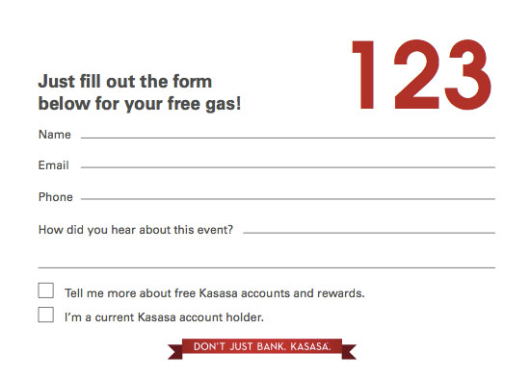 Those consumers who wanted free gas had to surrender contact info. 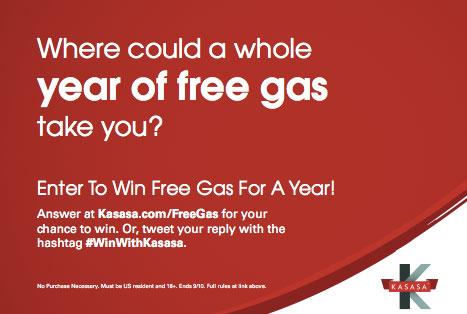 There was a secondary promo — a sweepstakes giveaway for a year’s worth of gas.