Subscribe Now Get The Financial Brand's FREE Email Newsletter
Getting campaigns approved through the compliance process is usually a struggle for most financial institutions. Marketing teams and compliance departments wrestle with each other constantly. But a scrappy fintech startup in Utah thinks it has the answer: a web-based solution aims that organizes and accelerates the ad approval process, while also creating a convenient digital trail for compliance audits.

If you’re one of those financial marketers who prints out all your advertisements and sticks them into three-ring binders as part of your approval and compliance process, Jared Hales and Jason Tonioli have a message for you: there’s a better way.

kadince — is a web-based tool that allows bank and credit union marketers to turn the typical flurry of email approvals and the clunky shelves stuffed with so-called audit binders a thing of the past.

Hales and Tonioli know what they are talking about. Before they launched kadince earlier this year, the pair managed the marketing department at a community bank in Utah for over a decade. Hales and Tonioli say they first developed an ad management/approval system similar to kadince while working at the bank.

“We’ve lived through this ourselves,” Hales says. “We’ve worked within a bank and we know what folks in these positions have to deal with and experience.”

How does kadince — which currently is being used by approximately 50 financial institutions — organize, simplify and speed up the ad approval process as well as prep staffers for those inevitable compliance audits?

It all begins with a project’s components being keyed into the browser-based system, and uploading the marketing materials that need to be reviewed. The system can handle just about every type of ad you can think of (doc, jpg, mp3, pdf, ppt, videos and several other formats). Then the names of key employees are assigned for various approval tasks — spelling and grammar, management, compliance, etc..

The system automates all notifications and reminders in sequence, according to Hales. From there, selected staff members can approve as-is, approve with changes or submit changes with a request to see the revised project.

“Marketing people don’t have to be the bad guys anymore, constantly nagging compliance for faster approvals,” Hales says. “They can let the system handle all of that for them.”

Once everyone has approved the file, the creator marks the project as complete and the project is ready to be shown off to the world. 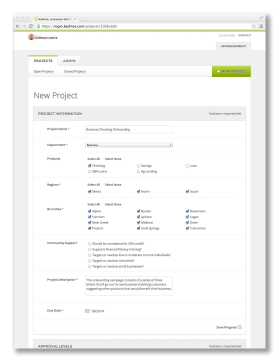 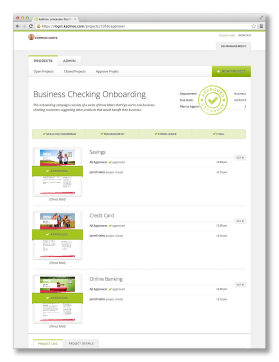 The kadince system point-and-click, browser-based interface — the project creation window (shown left) and the approval process (shown right). You can click on either image and enlarge it to full screen.

The archiving and logging of all changes and notes takes place along the way, Tonioli explains. “Anytime someone touches or suggests a change to or approves an ad, it’s all logged within the system.” As such, there’s “no need to file away or print, your ad becomes audit-ready instantly.”

Tearsheets can be attached to closed projects at a later date, Hales adds, plus the creator can include follow-up dates and ROI goals with the project. “So, when audit time rolls around, auditors can be issued a temporary login [that will allow them] to review projects, make notes and flag items for review with the marketing and compliance teams.”

“Marketing is one of the most closely scrutinized departments in any bank or credit union,” Tonioli says. “So we sought to develop a way to create better reporting functionality in this area”–by allowing users to search for past ads or campaigns by department, product, region, branch or medium type as well as easily pull reports on them.

The kadince solution also simplifies the compliance side of things. Hales and Tonioli says it ensures financial marketers are always ready for their next audit.

“Marketing departments usually spend hours and days preparing for a marketing audit to get all their ducks are in a row,” Hales explains. But he says none of that’s necessary with the kadince system, thanks to the way it digitally archives and organizes ads, thereby making them easily searchable and findable.

“Literally any day of the week, an auditor could walk into a bank or credit union running kadince and their marketing people would be ready to go — on the spot.”

Once an audit is underway, kadince provides auditors, compliance officers and examiners with a “completely transparent process,” claims Hales. “It’s really easy for them to follow along the audit trail, and see if they need to go back and look where something might have went wrong.”

Tonioli adds that kadince can even improve the often tenuous relationship between a financial institution’s marketing and compliance departments. According to the Hales and Toniolli, the chief complaint compliance people have about marketers is that they don’t follow the rules like they should.

“kadince makes marketing appear more organized and less like mavericks who wing it all the time,” Toniolli says. “The processes are more consistent and streamlined.”

Speedy Set-Up and a Flat Fee

It can often take months to implement new tech tools, followed by an expensive training period. kadince wanted something different, much simpler. Tonioli estimates that the set-up and training process for kadince takes about 30 minutes — maybe less.

“After that, the bank or credit union has complete control to make changes to their system,” he says.

The pricing model is refreshingly straightforward for the fintech world. Rather than charging a per-user type of license, kadince decided to go with a flat annual license based on the size of the financial institution, scaled to cover the numbers of users, projects, storage needs and bandwidth.