The campaign is designed to complement the credit union’s “7 Principles,” a philosophy built around the idea that a financial institution doesn’t have to be self-serving. 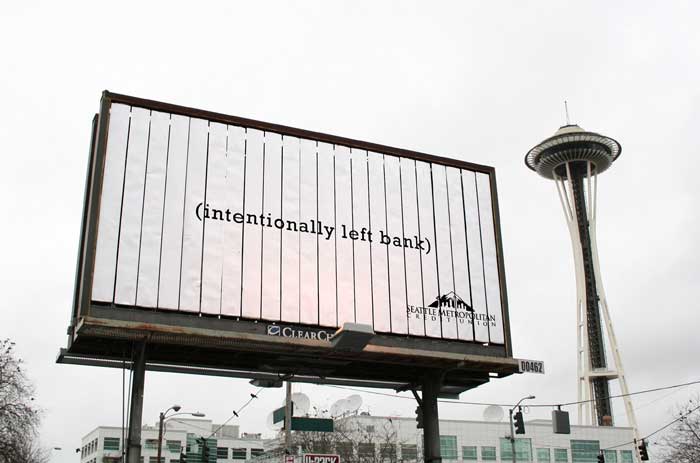 “Intentionally left bank,” is the only thing Seattle Metro Credit Union’s billboard says.
How many financial institutions run billboards that look this uncluttered?
(Note: This is actually a full-color photo. That’s what Seattle looks like in winter.)

The campaign’s media strategy relies heavily on outdoor. Eight billboards will rotate in four-week cycles during the first and second quarter. Ads will also run on the sides of 16 Metro busses. Full-page ads will appear in Seattle Metropolitan magazine, The Stranger and Conscious Choice magazine over the same period. T-shirts are coming next.

All-in-all, this is a fairly sizeable campaign for a credit union with just over $500 million in assets.

“Fill in the Bank”

“Heart” will start running next week, right in time for Valentine’s Day.

While the ads themselves don’t ask for people to share stories about their bank breakups — there isn’t even a web address on one billboard — the open comment section on the credit union’s website was created for that purpose. So far, the credit union’s received 24 comments, including pithy anecdotes about people’s failed banking relationships.

Some people stopped by just to comment on the campaign’s creativity. One person called the campaign “witty and smart,” while another declared, “It’s corny and I LOVE it!”

All the work on the campaign including concept and design was done by Seattle Metro’s in-house marketing group. “I’m really proud of our team,” said Jill Vicente, CMO and VP/ Seattle Metropolitan Credit Union.

“Wrapping the ‘7 Principles’ around our credit union – both internally and externally – has been a huge task,” Vicente told The Financial Brand. “It feels good to see it evolving with each project.”

Seattle Metro’s last promotion garnered mounds of media coverage after the credit union announced it was giving away free money.