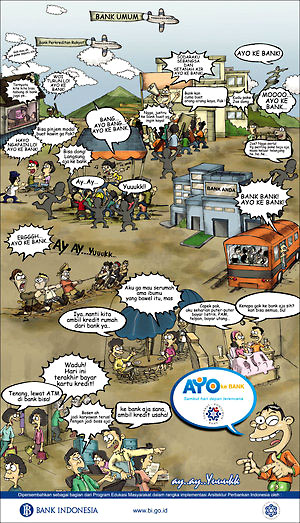 You don’t have to speak a lick of Indonesian to become engrossed by this banking ad, something that looks like a cross between a Richard Scary illustration and a Simpson’s cartoon.

It’s very engaging. You can easily spend five minutes with the piece, regardless of your native tongue.

You also don’t have to know a lot about Indonesia to know it is unique. And differentiation is what branding is all about, right? (Well… not exactly. Branding is also about relevance. You can’t just be different. You have to be different in a relevant way, but it’s hard to say if this approach connects with Indonesians.)

Note the captions like “Erggggh” from the tug-of-ropers and a cow that says “Moooo, ayo ke bank.” Onomatopoeia must work in almost any language. (By the way, “Ayo ke bank” translates to “Let’s go to the bank.”)

There are also a number of characters in the ad repeating the slogan, “Ay ay yuuukk,” which looks fun to say, whatever it means (especially in a banking ad).