ING Direct is trying to ignite a populist revolution in Canada over big bank fees. The project, built around a microsite at www.fairfees.ca, is something the online bank describes as “an active and growing community dedicated to challenging and improving the fairness of Canadian bank fees and service charges.”

“Together we have the power to change things for the betterment of Canadian savers,” the microsite says.

ING Direct’s microsite has three primary sections: Listen, Speak Up and Act. In the “Speak Up” section, there’s a petition that you can sign. It has apparently been signed by over 6,000 Canadians. 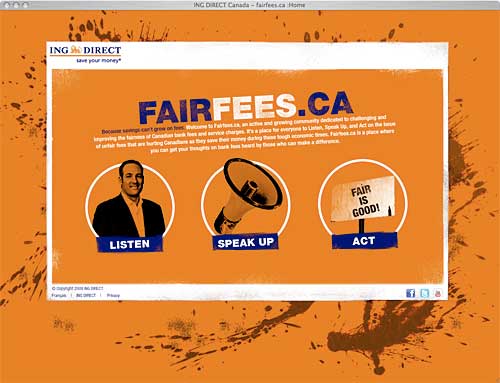 The fairfees.ca microsite has a petition signed by as many as 6,000 Canadians.

ING Direct is keen to point out that its “Fair Fees” initiative is “not a sales pitch, it’s a knowledge pitch.” However, there is a subtle marketing message sprinkled here and there; ING Direct wants “Canadians to know they have a choice” when it comes to banking.

This is the second time this year a financial institution has launched a major campaign targeting bank fees in Canada. Three weeks ago, The Financial Brand wrote about Coast Capital Savings tongue-in-cheek “I Love Fees” promotion which had a similar populist take on big bank fees.

“The national banking fees system seems ripe for a takedown. But such a takedown won’t come from one bank launching noisy, imprecise volleys against other banks.”
— Matt Shepherd, Writer

This isn’t the first campaign from ING Direct with shades of a revolutionary political campaign. Last year, the online bank created its “We The Savers” manifesto and microsite. 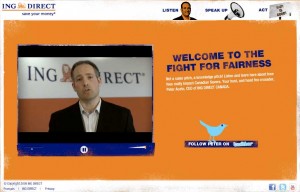 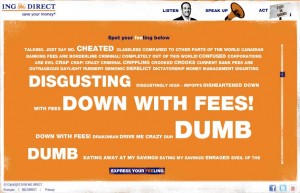 Tell ING Direct how you feel about bank fees, then view the “FEElings” of others.
(Note the Facebook, Twitter and YouTube icons at the bottom-right of the window.) 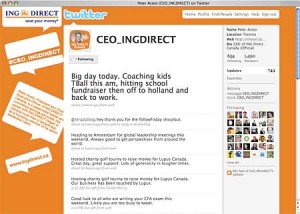 ING Direct Canada has its own YouTube account where you can watch the inaugural video for the “Fair Fees” initiative.