Subscribe Now Get The Financial Brand's FREE Email Newsletter
Will inflation raise TV, digital, print, and out-of-home advertising prices in 2023? Or will a recession lower them? Manuel Reyes of Cortex Media says he’s seeing big spikes in some media and little or none in others. His insider advice for banks and credit unions can help with devising a more informed marketing strategy and stretching the budget further.

Marketing is the largest budget line item for many consumer-oriented businesses and media is usually its largest component. Though the United States is contending with high inflation at the moment, media inflation has been a persistent issue for advertisers through most of the last decade, with price increases running in the range of 6% to 8% annually.

But even so, the upward pricing trend has put pressure on marketing executives to continually secure larger advertising budgets and optimize them as much as possible.

Like all businesses that serve consumers, those in the retail banking sector have been impacted by these cost increases. According to Kantar data, retail banking companies have spent a total of more than a trillion dollars ($1,073,044,736) on advertising in 2022 so far, nearly half on television (47.8%), followed by 23.3% on digital media, 11.5% on outdoor advertising, and the remainder on newspapers, magazines and radio.

Where The Money Goes:

Television was banking's No. 1 ad spending category in 2022, accounting for half of all spending.

So how is 2023 shaping up for media buying? Cortex Media is seeing substantial variation in the media landscape resulting from broad economic pressure and the opportunities unique to each media type. Here’s an overview to help banks and credit unions work out their marketing strategy, along with some advice on how to mitigate the impact of higher pricing on media.

TV prices are up a lot in recent years, in terms of cost per impression (what an advertiser pays for every one thousand people who see its advertisement). Inflation on TV advertising rebounded to approximately 15% in 2022, but increases varied significantly for different time periods in the day. With national broadcast TV, the cost for airing an ad during prime-time shows increased 20% while broadcast sports and cable were up about 12%. Inflation for other types of TV media was 4% to 6%, with streaming video at the top of this range.

The increase in prices on a CPM basis is due partly to drops in ratings — limiting the supply of impressions available for some TV programs and some time periods. But demand has held steady or increased in others, such as with prime-time and premium programs and live sports.

Optimize Where You Advertise:

Review your media mix to redirect spending in cases where the usual choices are no longer as effective as they once were. What worked well a year ago may not work as well now.

In the latest round of upfront negotiations for TV air time, prices did not rise as much as in the past and inflation was much closer to overall market inflation. Having said that, the deals that were closed include a much higher proportion of nonlinear/addressable/streaming impressions as part of the deals (linear is traditional TV). The issue here is that the linear part of the deal is harder to cancel than the nonlinear.

Upfronts run on what is called a broadcast year (October through September). We have already seen some cancellations of ad buys in the fourth quarter and expect a much higher level of cancellations in the first half of 2023. If the economy starts looking better by the middle of next year, we might see money coming back into the market in the third quarter, or at least fewer cancellations.

As a result, banking marketers may see a general downward trend in pricing in the next few quarters because some deals may be renegotiated, which seldom happens on national TV. Broadcast TV (big networks like ABC, CBS and NBC) will be in a stronger negotiating position than cable. Advertisers and agencies are questioning cable’s effectiveness (given challenges like cord cutting, declining ratings, etc.). Also, money from cable has moved to digital video. So we will see how these trends play out.

Digital is the other big media spend sector, and early indicators suggest banking marketers will have to weigh the tradeoffs with each type of digital advertising. To take advantage of deals, the option to choose is digital display. But the more effective option — in terms of getting more eyeballs on ads — is focusing on digital video and social media. 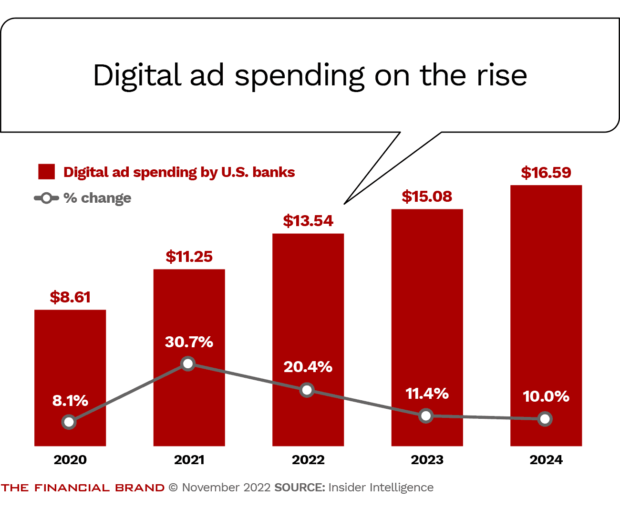 Within the marketing mix, digital display is on a descending slope due to its effectiveness (or lack of it). The areas where things are looking better are digital video and social media. These will have higher inflation than other options and their pricing should hold up in 2023. However, this does depend on the country’s actual economic performance, as an extra painful recession could wreak havoc.

OOH media is doing relatively well, especially since there are new digital options available. But it’s a small market, so it’s more volatile. Cortex anticipates some price inflation in this category, but does not expect it to be particularly high.

Print costs tend to be more stable. Print media has very high fixed costs in components like paper, ink, printing and distribution. Pricing can’t be reduced significantly without consequences, so when costs hit the limit that advertisers will bear, media organizations have no choice but to shut down or reduce circulation significantly.

Prices for print are likely to rise minimally, the intent being simply to keep up with costs. Expect that only large publications with strong brand names or reader followings are going to be solid bets over the long term.

Summing up, Cortex expects 2023 broadcast and streaming TV, digital video and social will have pricing increases slightly above market inflation for next year. Other media will have much lower increases. Print media is expected to have low inflation that will barely cover printing and distribution cost increases.

With these increases in mind, what should bank and credit union marketers do as they face a possible recession ahead?

Resist the urge to cut marketing budgets. Smart marketers have learned from past downturns that reacquiring customers is far more costly in the long run than not losing mindshare in the first place. Some contend that the cost of acquiring a customer is at least five times greater than the cost of keeping an existing customer.

Optimize your media. All companies have spending patterns or legacy media choices that may not be as effective or efficient as they once were. Economic change presents an opportunity to rethink which options make for the best marketing mix and how to get the biggest bang for the buck. Always go to market with alternatives in mind in case you can’t negotiate against aggressive but realistic expense goals.

A general trend Cortex is seeing is a move to more performance-based media and streaming video offerings. But media optimization is unique to each financial institution. What works for one brand may not work for another.

Be vigilant. Make sure your agency is compliant with your contract. Keep an eye on those precious media dollars, to be certain your media is being delivered fully and as approved.

Marketers must be more savvy to get a return on their investment amid the economic headwinds, but with an effective strategy, outsize gains are possible. The disruptive market forces need not be a setback, but rather could be an opportunity. Some proactive steps can set up big wins.

Manuel Reyes is the founder and chief executive of Cortex Media, which has provided media auditing and consulting services to major advertisers in North America, Latin America, Europe and Asia since 2001.