When a bank fails, it seems the other remaining financial institutions in the community are reluctant to aggressively market themselves to the failed bank’s customers. They don’t want to seem insensitive to the hardship placed on the community, nor come across as if they were dancing on the grave of their fallen peer. The psychology is understandable, but the strategy is a huge mistake and a massive missed opportunity.

Many financial industry experts agree that 2010 is on track to see as many bank failures as there were in 2009 — around 150, or between 2-4 each week. If a bank was seized in one of your communities this upcoming Friday, how would you respond?

Get your battle plan together now — before then next bank fails — so you can be ready.

At 4:50 pm Friday January 15, the Barnes Bank was closed by the FDIC and Utah Department of Financial Institutions. Within hours, Goldenwest Federal Credit Union had mobilized its resources, launching a coordinated, all-out response. Goldenwest wanted to make they sure picked up more than just a fair share of new business. Among Goldenwest’s tactics: 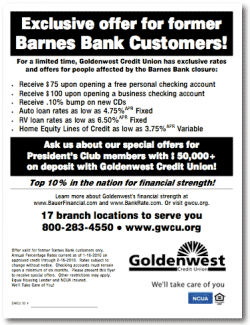 Ben Joe Markland, Sales & Training Manager at Goldenwest FCU, told The Financial Brand how the whole thing got started. “Essentially, our boss called us that Friday night (the day the bank announced it was closing) and asked us to come in on Saturday at 9 a.m.,” Markland explained. “By 10 a.m., we were going door to door and tweeting.”

The payoff seems to be worth all the extra hours and effort. In the first four days, Goldenwest brought in over 400 accounts and $3 million in deposits.

“We have since tripled our numbers of January, and doubled for February,” Markland said.

Goldenwest is in the process of building a permanent 4,300 square-foot branch to replace the temporary location across from Barnes’ HQ. It is expected to be open by June.

Some other things you can do: