The industry gave itself one big, fat, nasty black eye

Let’s face facts. The image of banks and financial institutions is in the toilet. When consumers perceive the industry as negatively as they do big tobacco, it’s safe to say banking’s reputation sucks.

There may be plenty of blame to spread around for the current financial crisis — ratings agencies, regulators, consumers themselves — but the truth is that people hold banks largely responsible for crippling the global economy. A 2009 survey found that half of all consumers laid the blame for the recession at the door of banks. Respondents in another similar study, when asked who was most responsible for the crisis, put banks and financial institutions at 63%. When the Associated Press conducted its poll in 2011, those blaming banks and lenders for our economic problems had climbed to 79%.

Data measuring consumers’ distrust of financial companies paints a gloomy picture. According to a 2010 study, two-thirds of U.S. consumers don’t trust banks. Another study in 2010 revealed that 38% think statements made by banks are “not at all believable.” 60% of consumers don’t believe that their bank is looking after their best interests. Four in five people (83%) believe President Barack Obama was right to describe bankers as “fat cats.” And 49% think “greedy” is the word that best describes banks.

People are pissed off — at you, dear reader, and your peers — and continue to carry a chip on their shoulders.

These days, banks are served a buffet of suggestions for how they might go about restoring consumer trust: improved communication, listening, social media, focusing on engagement or the customer experience. All good ideas, but the fundamental recipe for building — and losing — trust is actually much more straightforward.

The financial industry destroyed people’s trust by doing things like deliberately designing overdraft systems that triggered $385 in fees for $3 coffees. Credit cards came with punitive and unfair universal default clauses. Banks made $500,000 home loans to people with credit scores under 600 and annual income under $50,000.

Want to rebuild trust? Stop doing that kind of stuff. It’s that simple.

If banks want to rebuild trust, they don’t need to hop on Twitter. They just need to stop looking for ways to stick it to their customers. Quit being deliberately deceptive and misleading. Stop engineering sneaky traps that ensnare and punish consumers. Don’t dupe consumers with tricks. Don’t take advantage of people.

You may be tempted to say, “That’s not us! We aren’t the bad guys!” So you didn’t make any subprime loans? What was your overdraft policy? Were your credit card terms fair?

Banks don’t need sophisticated image strategies loaded with intricate trust engagement metrics. Banks need to go back to the basics. They need simple guidelines, like “Don’t do or say anything you wouldn’t do or say to your mother, kids, spouse or pastor.” Remember The Golden Rule?

What bankers could use to improve their image are the exact same things they learned as kids: don’t lie, don’t cheat, don’t be greedy, be fair, be nice, think of others and treat them right. There are probably other lessons bankers could take to heart from Robert Fulghum’s 1988 classic, “All I Really Need to Know I Learned in Kindergarten”: Clean up your own mess. Don’t take things that aren’t yours. Say you’re sorry when you hurt somebody.

What about now? Have things changed? Consumers don’t think so. A majority of Americans (61%) feel banks and financial institutions have not learned their lesson. Perhaps that’s because banks seem obsessed with finding any and every opportunity to slip new fees on customers (while trying to blame it on Congress). Regulators may have changed the rules, but the game — “How much can we get away with?” — seems to remain pretty much the same.

When financial institutions misbehave, increased regulations are just one more symptom of a much bigger issue: blown trust. The industry, as a whole, needs to hold itself more accountable, because the actions of every bank and credit union can have a direct and immediate — and painful — impact on your brand as well. 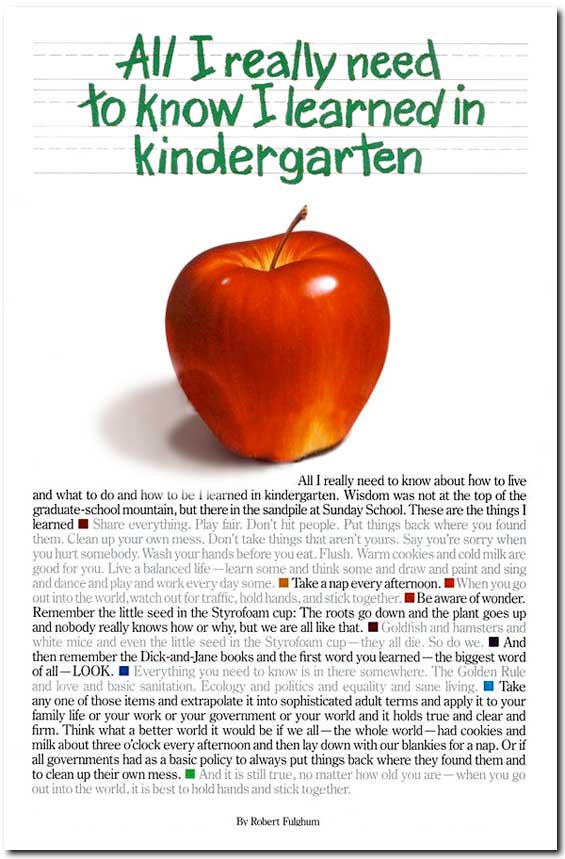