Subscribe Now Get The Financial Brand's FREE Email Newsletter
Having to retool financial marketing on the fly due to fast-changing economic trends is challenging for all financial institutions. Bank and credit union marketers reveal their thinking and tactics, along with some examples of ads.

Rising interest rates, the return of high inflation, and the continuing potential for a recession have banks and credit unions reexamining their marketing as they adapt to a new and fast-moving environment.

It wasn’t that long ago when an even greater challenge — the sudden arrival of Covid in early 2020 forced financial marketers to learn agility under pressure. With the pandemic, product marketing pretty much got paused while institutions concentrated on telling people how to continue banking during branch shutdowns and how to obtain Paycheck Protection Program loans.

This time around the demands are quite different. There’s a need both to talk to the situation — very different from what many consumers and businesses have seen for years — but also the need to shift gears in terms of what products to promote and how.

The Financial Brand sought input directly from bank and credit union marketers about how they’re reacting as well as from experts at Mintel Comperemedia regarding financial institution marketing trends they are seeing.

“With the mortgage market seemingly screeching to a halt as rates rise, we are refocusing our ad dollars on our commercial lending and retail products such as CDs,” says Mary Anne Clancy, SVP/Marketing and Communications, at Institution for Savings in Newburyport, Mass.

Clancy notes that another change her institution has made is to shift some spending toward paid testimonial content. “We’re reminding our customers of our values and stability,” she says, “along with our charitable giving.”

One example is increased spending on radio advertising, using stations that include DJ endorsements. “We’ve found that our community could really benefit from learning about Patelco’s mission,” Johnson explains. A key message has been that in this often-confusing time, the credit union has certified financial specialists on staff to help both members and non-members navigate changing conditions. Johnson adds that Patelco has upped its spending on webinars on topics of current concern.

Also key: Recognizing that for many consumers circumstances have drastically changed.

“Directionally we haven’t changed our marketing, but tonally we have,” says John Huntinghouse, VP/Marketing at TAB Bank, Ogden, Utah. “We are mindful of the situation many find themselves in and we want to make sure that we have content that is not deaf to where they are, while trying to promote products we believe will help them.”

A Case for Upping Marketing:

Some institutions have trimmed marketing spending or are striving to contain it. Others see current circumstances as an opportunity to stand out.

Where the Eyeballs are Today

Patelco has increased paid-search digital advertising because consumers are spending more time Googling for products and services that can help them lower their costs and put aside more savings.

“We have seen double-digit increases in engagement on our social channels and with our online content since the end of 2021,” says Johnson. People are anxious not only to find savings but to find more protections against online fraud.

“Our people want to know what the credit union will be doing to help them,” says Hildebrand, adding that it’s “an interesting sociological question regarding the accountability of a business to help employees during this time when margins are squeezed.”

Talking to Customers About Inflation and Recession

Some financial executives still evince discomfort talking about inflation and recession, almost like it’s the 800-pound economic gorilla that will go away if you just don’t acknowledge it.

“We send out regular emails helping keep members informed about the Fed rate increases and how the hikes may apply to them and how we can best support them,” says Johnson.

Banking institutions that go right at the issue in an explicit way in their marketing are still not the majority, according to Anjali Ambani, Senior Research Analyst at Mintel Comperemedia. In their work she and Bella Broccolo, Associate Research Analyst, have found that often it is nonbank financial brands that are squarely addressing current conditions and the potential for a recession.

Brands that explicitly use these terms tend to pair it with consumer educational efforts or with promotion of products that can help people cope. Examples of the former are seen below in the example from Wright-Patt Credit Union, Fairborn, Ohio, and Daylight, a neobank created for the LGBTQ+ community, with its “Recession Money Rulebook.” Examples of product promotion, include the alternative investments offered by Fundrise and American Advisors Group’s promotion to older Americans suggesting reverse mortgages as inflation protection.

Broccolo says that such offers carry a “the time for this is now” message. 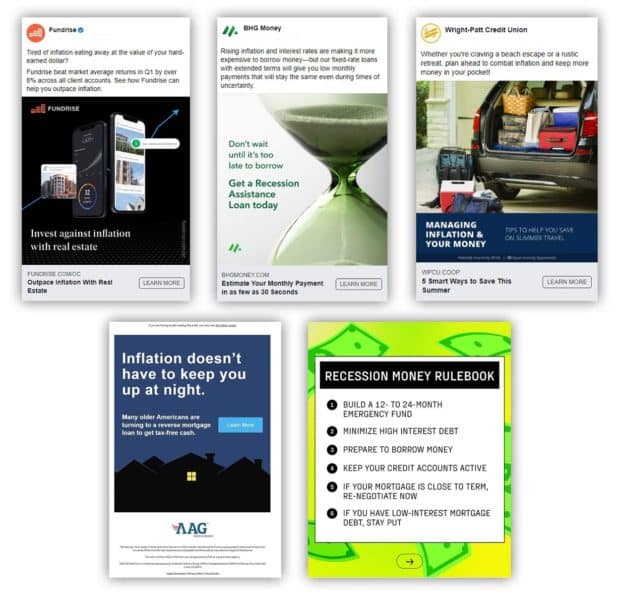 Ambani says the promotion below from Ally Bank is a good example of how to tie both product promotion and consumer concern into one message. The graphic, from an Ally email, offers a cash bonus for opening an account that has a new, higher rate. And on top of that is a message indicating that Ally watches the markets to make sure it offers a decent return on savings. 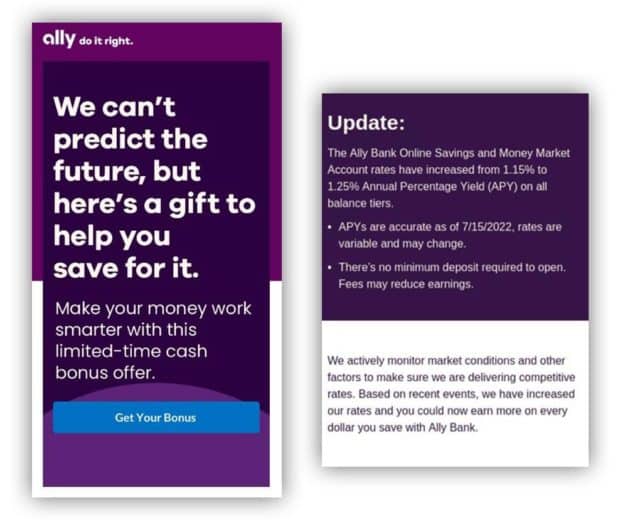 Many banking institutions have taken rising rates as an opportunity to promote special discounts or opportunities to borrow before rates ratchet up further. Ambani says that credit card issuers have been hawking 0% balance transfers and introductory APRs in hopes of convincing rate-wary consumers to move over to their offerings.

Something that has surprised Bella Broccolo about banking promotions for deposits is how many strictly promote rates.

“Most are heavily numbers-focused,” she explains. “It may be a consequence of rates changing quickly and institutions just trying to keep up with that. But some sort of differentiation would be interesting and unexpected.”

Broccolo says that many institutions aren’t changing their digital creatives but simply raising the rate included in it as market rates go up. 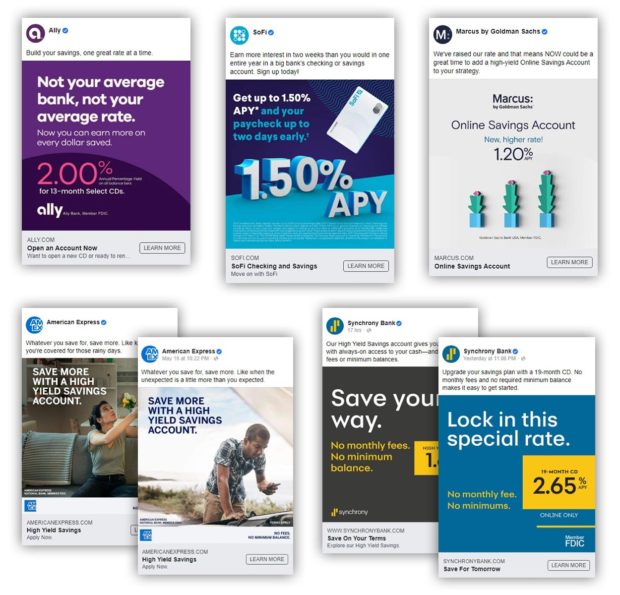 With occasional exceptions, this applies in direct mail promotion as well, according to Ambani. She has been surprised that more creativity isn’t being applied to deposit promotion. Here and there efforts stand out, such as Chase Bank’s promotion of deposit accounts to its private clients more heavily than before.

The most aggressive efforts — again rate-centered — have been among direct banks, including Ally, Marcus, SoFi, Synchrony and others. They have been promoting higher rates heavily, according to the analysts.

One area that has stood out is card issuers’ offers of bonuses for charging gasoline on their cards. Gas prices had been falling in mid-August to just under $4 a gallon after topping $5 nationally in June 2022, but these bonuses, introduced earlier, have card marketers thinking about marketing tie ins that provide price relief in one way or another.

Broccolo, who produced a report on the subject of gasoline-based incentives, says that “brands are starting to consider other pain points for consumers, because the end goal with these cashback promotions is to address what’s important to the consumer at the time.” She notes that Discover offered 5% cashback offers on purchases at Target at the same time that it was offering 5% cashback on gas purchases. (This offer ran from April-June 2022, as part of the Discover “Cashback Calendar.” In later 2022 purchases on Amazon and through digital wallets will have 5% cashback levels.)

Cashback for debit card purchases of gas and other essentials has caught on among fintechs. During mid-2022 Dave introduced a limited-time 10% gas cashback incentive, in part because many of its members don’t qualify for credit cards that offer cashback.