Subscribe Now Get The Financial Brand's FREE Email Newsletter
Rising rates and major inflation, with the threat of recession over the horizon, have consumers seeking guidance as they sort out what it all means. Ally's Andrea Brimmer says bank marketers must combine honesty and balance.

Of all essential goods, clarity is in shortest supply.

Even economic experts debate what numbers mean the most in measuring the impact of inflation on the economy and the potential for slipping into a recession. Many consumers aren’t sure what to make of the overall picture, and their view on what current conditions mean hinges a good deal on their own circumstances.

“People are concerned and cautious,” says Andrea Brimmer, Chief Marketing and Public Relations Officer at Ally Bank. She adds that many of them are also plain confused.

Financial marketers must strike the right tone amid growing economic stress while still continuing to sell products and services and build their brand. 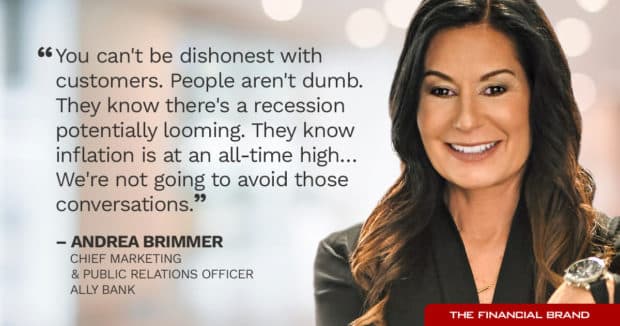 As they determine what their marketing and communications strategies will be in this period, they must also find a way to remain credible. In an interview with Brimmer, The Financial Brand explored how to do all this.

It’s not for marketers to predict the economic trajectory of America, says Brimmer. But what they say and how they say it will mean a good deal to how customers and prospects alike view their institutions in the future. (Consider the digs the Federal Reserve has taken for insisting for months that the first signs of inflation were “transitory.”)

“Am I going to go out there with a 60-second commercial saying, ‘Oh my God! The world is coming to an end — there’s a high rate of inflation and we’re going to go into a recession? No,” Brimmer says. “But I am going to develop content that is going to help people understand what’s going on and what they can do.”

Ally’s marketing has long stood out for its humor, sometimes even its offbeat approach. Does that perspective have to be shelved as people get twitchy over economic headlines?

Not at all, in Brimmer’s view. “The world is very heavy right now, and I don’t think people want things to be heavy in every aspect.” The country is still mired in Covid and politically the divide in viewpoints is toxic. 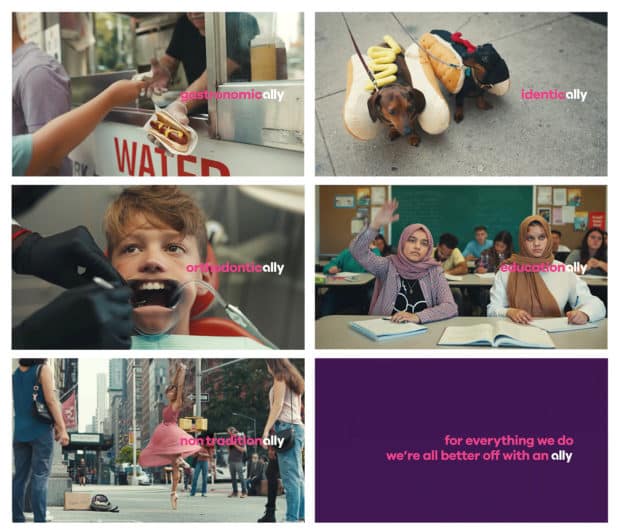 “People need levity,” says Brimmer, “and in our view, providing it is a good thing. But you have to provide it at the appropriate time and place.”

It’s a judgment call for every financial marketer. “There’s always a smile in our communications,” says Brimmer. “It’s something that’s true to our DNA. Taking a hard left turn from your brand’s DNA is jarring to people. You have got to stay true to your marketing DNA right now, as long as you do it appropriately.”

Brimmer also warns that brand safety is a major concern. “We’re all contending with how to keep our brands in front of people in relevant and safe ways. It’s so divided out there now. Half the world thinks one way, and half the world thinks the other.” Financial providers can easily blow it through careless messaging.

Right now, inflation and the risk of recession are very personal. A very real “bifurcation of wealth,” in Brimmer’s words, is beginning to be felt.

“The affluent, while they are concerned, are still cautiously optimistic, because they are financially OK,” says Brimmer. “We still have a very high rate of savings in this country and more people are well-capitalized right now than they were when we went into the last economic recession and depression back in 2008. They saved a lot during the pandemic and they are still in decent cash positions.”

For people who are not affluent, Brimmer continues, “there are still plenty of jobs out there.” So far that has made a big difference. “They’re getting hit hard by rising prices and have pulled back on more discretionary purchases like clothing. But they’re still spending.”

Measures of consumer confidence indicate it has sunk to historical lows, but much of that may be due to the simple shock of seeing rates and prices going up when many people have never seen such conditions in their lives.

How Ally is Adjusting Its Communication Strategy

“As marketers, we need to be more sensitive to the environment and aim to provide the right kind of guidance and content that consumers need right now,” says Brimmer. She says banking CMOs she’s spoken with are examining their approaches to today’s conditions to consider course corrections.

“Your approach has got to be realistic and you can’t be dishonest with consumers,” says Brimmer. “People aren’t dumb. They know there’s a recession potentially looming. They know inflation is at an all-time high. We believe in transparency and we’re not going to avoid such topics.”

That said, Brimmer says communication has to be constructive.

Brimmer says she has been meeting with the bank’s outside ad agency and spent time with Ally’s content team to find the right mix of ideas.

“We’re moving toward heavying up financial literacy and trying to help people think through how to navigate financial uncertainty,” says Brimmer. For the industry, a definite shift from the approach often used during the comparatively brief pandemic recession is critical. Back then, institutions tended to stress brand messages, often, in the earliest days, putting out messages emphasizing that their institution was there for customers no matter what happened.

Brimmer says Ally is going more now for a message of how its products can be helpful. “What are the things people need to know during economic uncertainty? How can you safeguard and grow the savings that you have?” 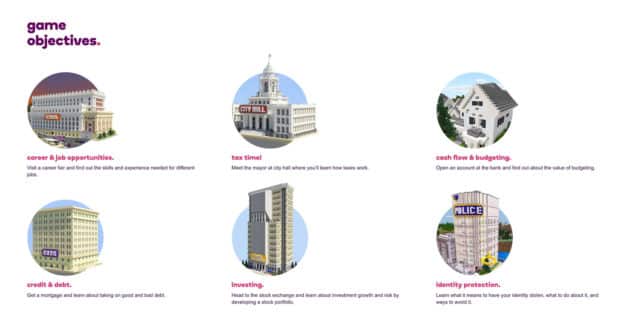 “Fintropolis” is a financial literacy game Ally Bank sponsors within the Minecraft universe.

Consistent with its long-term marketing strategy, Ally blends entertainment into financial literacy efforts, tailoring it to the target audience.

Even today, “you’ve got to be entertaining and engaging with financial literacy training because it’s not a subject that’s sexy,” says Brimmer. There are many distractions and alternatives vying for people’s attention, she points out, and most people don’t naturally want to spend a lot of time on it.

Brimmer says marketers must watch developments on social media platforms such as TikTok and Reddit where hundreds of thousands of consumer interact regularly with other consumers on financial subjects.

Ally’s newest effort is a program called Wallet Wise, which provides a thorough grounding in key financial skills and subjects. The bank taps community groups to promote it as well as digital marketing channels.

Brimmer already has her eye on how the metaverse can be used for financial education. One of Ally’s current efforts in a related vein is a world it sponsors in Minecraft called “Fintropolis.” In this virtual reality middle schoolers can try out all sorts of financial services and functions, from budgeting to mortgages to investments to paying taxes. To learn the risks of cyberspace, players can even have their virtual reality identity stolen within Fintropolis. Brimmer says Fintropolis has been downloaded over 3.5 million times.

In the months ahead Ally plans to pull much of its online financial literacy content together into a new hub called “Conversationally.” Ally, which has long used gamification to boost literacy and to reach out to consumers in fresh ways, will continue to do this in new ways in today’s environment.