Subscribe Now Get The Financial Brand's FREE Email Newsletter
Hispanic Americans are no longer a niche market. Now representing one in five U.S. consumers, they afford banking providers significant opportunities for growth. Here are five tips for financial marketers looking to tap the potential of the Hispanic market, and what banking providers can do to craft a strategy that resonates with this massive audience.

As competition for deposits heats up, banks and credit unions in the U.S. will need to take the Hispanic market seriously. According to an in-depth 48-page report from Raddon (a Fiserv company), institutions that take a fresh look at this pro-savings demographic can pick up more market share if they adjust their thinking on banking channels, means of outreach, and product design and promotion.

The first thing financial marketers must do is realize that Hispanics come from many different country and cultural backgrounds, with their own subtle differences. Diversity is strong in this group. And being bilingual is only a beginning. Offering Spanish marketing and account materials and bilingual front-line staff remain important overall, but the significance of this decreases with each new generation of Hispanic consumers. Understanding the mindset is as important as language — e.g., they exercise caution in spending, pay debts in a timely way, and often dislike having debt in the first place.

An individual’s generational segment — Boomer, Millennials, etc. — and how many generations someone’s family has been in America have a huge impact on their attitudes, behaviors and preferences related to banking. According to the U.S. Census, “Hispanic origin can be viewed as the heritage, nationality, lineage, or country of birth of the person or the person’s parents or ancestors before arriving in the United States. People who identify as Hispanic, Latino, or Spanish may be any race.” The U.S. Census also points out that Hispanics are the third-fastest-growing group in its tallies, projected to grow steadily so that by 2060 it will more than double, to 29% of the U.S. population. 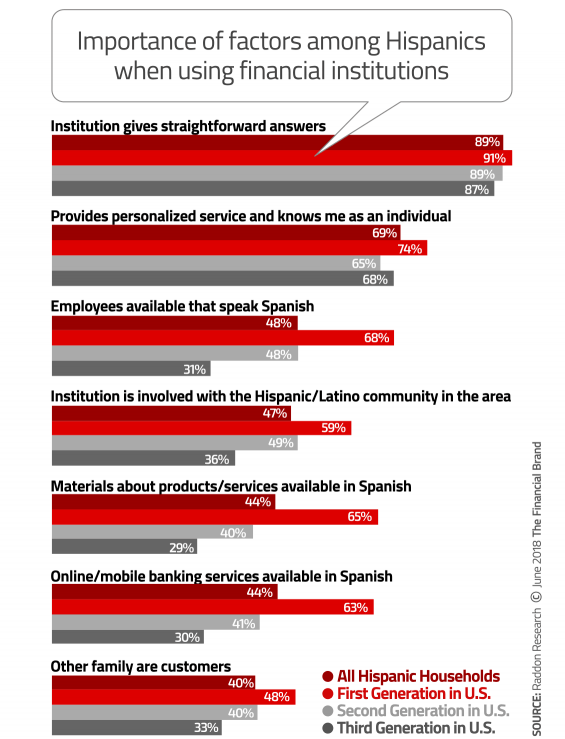 According to the Raddon report, Effectively Serving The Hispanic Market, nine out of ten Hispanics are already “banked.” Most Hispanic households (69%) use a major banking institution, but Raddon’s research revealed significant generational differences. Among first-generation Hispanics, major banks have 92% of the share. However, 67% of second-generation Hispanics are with a megabank, 12% with a regional bank, 12% with a credit union, and 8% with a community bank. By the third generation, the mix is more evenly distributed: 59% use megabanks, 14% use regional banks, 15% use credit unions, and 10% use community banks.

Raddon’s research underscores two key characteristics of this growing demographic. One is that Hispanics are more oriented to goal-setting than other Americans. Hispanic’s financial attitudes also tend to skew more conservative than the typical American consumer’s thinking. In addition, while many consumers lean increasingly towards digital access to banking service, Hispanics as a group demonstrate greater demand than is typical for traditional channels such as branches. 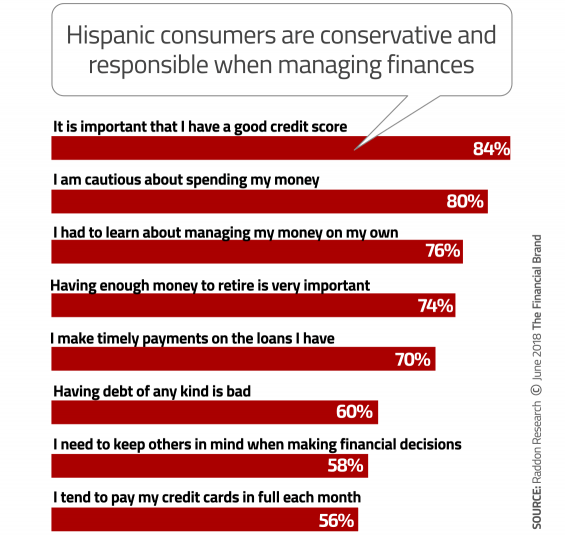 Three quarters of the sample told Raddon they’d had to figure out how to manage their finances by themselves. As a result, the report suggests that education from providers would be valued by Hispanics.

Raddon analyst Lynne Cornelison says that first-generation individuals, younger Hispanic consumers, and those who use a major bank as their primary financial institution place the greatest value on financial literacy programs.

Hispanic households are uniquely high-tech and high-touch, according to Raddon. Looking at electronic channels overall, Hispanic households generally rely more heavily on them for information and receiving and transferring funds, and for payments. For instance, 79% of Hispanics use online banking to get account information or to transfer funds, 73% use direct deposit in some form, and 59% use mobile banking for account information or to transfer funds.

Mobility appears to make a significant difference when it comes to paying. Nearly half of Hispanics use person-to-person electronic payments; at 47%, this is more common than among all U.S. households at 41%. PayPal currently reigns among Hispanics for P2P, but nearly one out of three say they are interested in P2P offered by banks or credit unions.

In addition, Hispanics are much more likely than the norm to make mobile payments, with 35% doing so and 42% likely to do so within the next five years. This compares to only 13% of all U.S. households currently making mobile payments and only 12% adopting this channel further on. 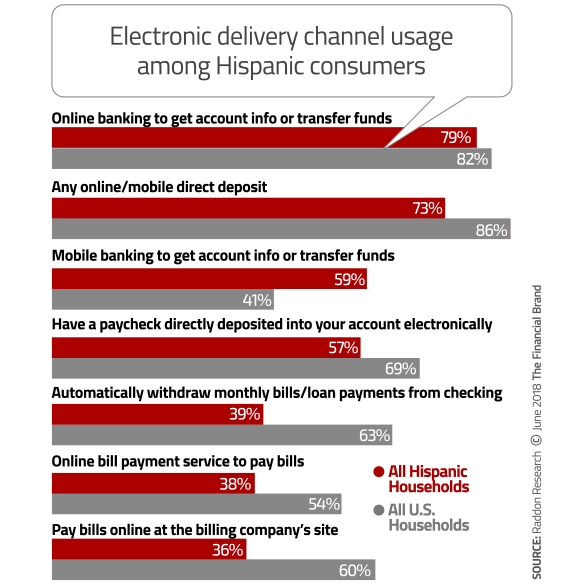 Given Hispanics’ comfort with electronic channels, Raddon recommends making them extremely friendly to this demographic group. Financial institutions will also need to focus on providing a seamless experience for this dual-faceted segment.

“To enhance the user experience and ease of use, institutions should consider bilingual access,” the report suggests. “Institutions can also strive to maximize the traffic within these channels with other product and service information that may meet potential service needs.”

3. Strike the Right Balance Between ‘Digital’ and ‘Personal’

“Hispanic consumers are more likely than the average U.S. consumer to use the branch, and are almost three times more likely to use a grocery store branch,” the report states.

Coupling this with the strong desire to be known as individuals and to receive personalized service, Raddon recommends financial marketers play to those preferences.

She adds that Hispanic customers want to deal with branch staffers that they can view as “trusted advocates.”

As the chart below shows, Hispanics’ desire to open new savings, checking, CD, and retirement accounts often dwarfs the demand projected among all other consumers. 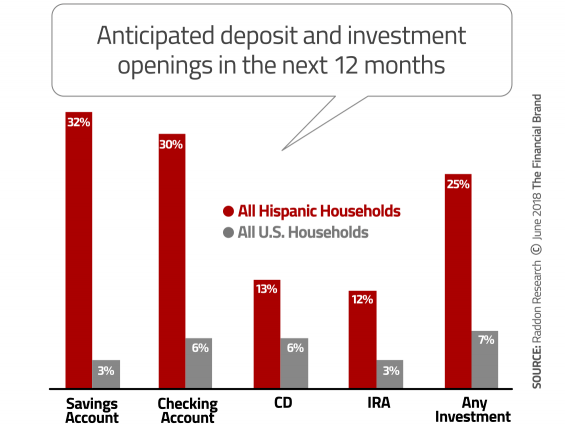 Regarding retirement plans, fewer Hispanics currently set aside retirement money regularly compared with all U.S. households — 33% versus 41%. (Another 22% put away retirement money whenever they can, slightly ahead of the 19% among all households.) However, the report shows a greater number of the Hispanics who are not saving for retirement now plan to do so compared to the nation as a whole.

The aversion to debt mentioned earlier also plays a part in savings towards two major purchases: homes and cars. Among Hispanics, 52% reported that they could make a 20% down payment on a home — 18 percentage points higher than the rate for all Americans. Hispanics are much more likely to be in the market for cars — 40% expect to be in the market to buy one in the next two years versus 24% of the total population.

The Hispanic market’s emphasis on goals comes through strongly in the report. Hispanics have needs and desires that they are willing to save towards.

“A financial institution will greatly benefit from providing services around financial goal-driven objectives,” the report says, “setting incentives on increasing savings levels, and emphasizing the importance of retirement readiness.”

Author Cornelison recommends educational efforts to help Hispanic customers develop even stronger savings habits in order to increase the dollar amounts they put aside towards goals. One suggestion is playing to this market’s strong interest in emergency savings.

As Raddon sets out in detail, Hispanics have stronger intentions of buying a home in the future than all households. The report also points out that Hispanics most commonly obtain auto financing from dealerships, which means banks that reach out to create awareness of their direct auto loan options may pick up some business from this market.

However, a particular appeal for Hispanics would be short-term installment credit. Raddon’s report illustrates that Hispanics’ use of alternative loans — payday loans, title loans, deposit advances, and other options — is greater than all households. Payday borrowing is twice as common in this segment.

In fact, Raddon found that almost half of Hispanic households would welcome a short-term borrowing opportunity with their primary financial institution. The report adds that seven out of ten said that they have good or excellent credit. Cornelison calls this “a significant engagement opportunity.”

This suggestion comes at a time when the Office of the Comptroller of the Currency has urged national banks to increase shorter-term consumer installment lending.

Tips and Insights for Marketing to Hispanic Consumers

A plus for marketers trying to reach the Hispanic market is that the target audience wants to know more about what banks and credit unions are offering.

“Hispanics are more likely to be dissatisfied with the financial information currently available and to not know what services are right for them,” according to a study by Univision. “The good news for marketers is this has spurred Hispanics into action. Two-thirds of Hispanics actively seek information about financial products and services.”

In fact, the companies’ research indicates that Hispanics are twice as likely to find financial advertising interesting, due to their desire for more information. Two thirds of the survey sample said that using Spanish in the advertising creates “more of an emotional connection.”

Here are some tips for reaching Hispanics from Hilda Marquez of Balcom Agency:

Marketers can’t ignore social media for this group. Here are some key points from a joint report between ThinkNow Research and Mitú, a Latin-oriented media company: