Subscribe Now Get The Financial Brand's FREE Email Newsletter
When it comes to creating and nurturing their brand, most banks and credit unions play it safe and compete against each other as they always have — through pricing, product, and service. Two traditional institutions broke the mold and found that with big risk comes big rewards.

The banking environment today is far from normal. And it likely will never be “normal” again. Being able to adapt is a critical marketing skill as institutions ride the Covid roller coaster, says Josh Streufert, Creative Director, Principal, Strum Agency. “As marketers, we must make real-time decisions on branding, messaging, spend, and manage the funnel all while getting a handle on how customers are reacting.”

Says Streufert, “Good branding has always been about fulfilling not only practical needs but emotional needs as well. You want to create fanatics when you build your brand.”

Here’s how two institutions took major risks, including changing their name in one case and going out on a limb with humorous ads, to build their brand.

The cases described below are based on video presentations in the Forum+ video channel.

How to Change Names Without Alienating Customers

What is now Frontwave Credit Union began as Pacific Marine Credit Union in 1952, named for its close association with the U.S. Marine Corps training base at Camp Pendleton, Calif. While it’s difficult to think of a brand connection that is as respected and prestigious as the U.S. Marine Corps, the credit union felt the name was hindering growth in the community and wasn’t aligned with the new culture the organization was trying to build, explains Todd Kern, Chief Marketing Officer of the $1.18 billion asset institution.

“We wanted to continue our proud history with the Marines while telling the entire community that we were open for business,” says Kern in a video presentation along with Streufert. Acknowledging that a name change was necessary — yet difficult and potentially confusing to members and the community — the credit union sought a name that would transcend product yet remain inclusive of its Marine Corps roots as well as Camp Pendleton’s unique coastal and desert geography. They settled on Frontwave Credit Union, a more approachable name with a nod to the Marine’s role as the military’s First Wave of Fighters.

Getting to that point was not an easy process, and carried many risks. For one thing, an internal survey revealed that marketing and branding were among the credit union’s worst competencies. The institution embarked on what Kern calls “brand discovery.” Through employee and member interviews, surveys and workshops, among other tactics, the credit union sought to tie its history to its purpose by gaining a deeper understanding of its core customer segments.

“To create a company culture that reflects your values and aligns with your brand vision, uncover who you are today and define what you want your brand to be in the future,” Kern advises. Continuing, he says financial marketers should bring together executive and cross-functional teams from all levels in the organization to engage in a collaborative process to determine areas of strength, misalignment and opportunities to position the brand for future growth and relevancy.

Even a name change couldn’t dilute Frontwave Credit Union’s strong brand, thanks to a laser focus on their company culture, core values and vision.

Not everyone was initially onboard. “We had ex-Marine board members who were adamant that we needed to keep Marine in our name,” recalls Kern. In time, these individuals came around.

“Market distinction is key,” explains Kern. “You can then resonate with customers and your organization comes together for a common purpose. You can break the chains and begin to rally the troops.”

One technique Frontwave used to rally the troops was to host “brand camps” in which every employee learns about the brand, vision and mission. Employees leave camp with a two-sided brand card. On one side is a statement of the credit union’s brand purpose and the other side are blank lines for employees to write what they will do every day to support the brand.

Frontwave’s About Us video reiterates that commitment, dedication, courage and service: “People work every day for their family, their friends, their community. … They plan, they grow, they fight for what’s important. And when they bank, they bank here.”

Since 2017, Frontwave’s assets have grown 30% and its Net Promoter Score (NPS) increased 11%. And the percentage of members who use Frontwave as their primary financial institution (PFI) increased 13%.

Betting on Humor to Boost the Brand

Another effective branding tool is humor — or rather, it can be. As any marketer knows, humor is very subjective and can flop badly. For Denver-based First Bank, with $19 billion in assets and more than 100 locations in Colorado, Arizona, and California using humor in marketing was way outside their comfort zone, according to CEO Jim Reuter.

That is, until they hired a new ad agency out of Boulder. The bank rejected the agency’s initial advertising concepts, Reuter explains in a Forum+ video, but finally “we got our courage up and took some risks.”

First Bank got over its concern about using humor as part of its branding strategy and found that a few laughs are great for business.

The financial crisis made it even more imperative that financial institutions show their human side, he says. Since then, the otherwise buttoned-down bank has rolled out several unconventional advertising campaigns. Here are a few of them:

During one campaign, the bank erected a billboard that read, “Deflate mortgages, not footballs.” The billboard was strategically placed outside the University of Phoenix Stadium, host to the Seattle Seahawks and New England Patriots for Super Bowl XLIX and just after the Patriots had been accused of under-inflating their game footballs during a playoff game. The ad received national press and Reuter estimates that 50% of their target market saw the publicity. 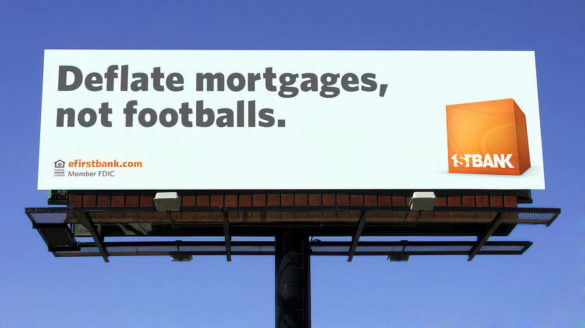 To promote its participation in the Zelle P2P funds transfer program, First Bank’s campaign took an entirely different tact, going for a heartwarming/heartbreaking story of a young boy and a puppy. Sadly, the puppy is sold to someone else because the boy’s father had to waste time withdrawing cash from an ATM rather than using Zelle.

In a highly unusual twist, the bank had the agency proactively film a disclaimer ad in case there was backlash to its sad puppy story. During the 2015 Super Bowl, GoDaddy faced backlash for a similar ad that showed a lost puppy making its way home—only to be sold on arrival. In the disclaimer ad, which is quite funny, the young boy steps out of character to explain that the ad was staged, that it was an actor and not his actual Dad in the spot, and that he’s more of a cat person and didn’t want a puppy anyway.

As it turned out, they needed have worried. The week after the original ad, First Bank’s P2P transfer enrollment skyrocketed. The bank also augmented the ad with a sweepstakes to win $500. Today, 40% of bank customers use Zelle.
Another successful ad using humor was the bank’s “Saving in Style” campaign showing super-glamorous people confessing that they make coffee at home or sneak candy into movie theaters to save money. First Bank ran online contests asking customers to send in savings tips and featured the best of those tips on their social media pages.

Finally, not funny, but offbeat, First Bank featured actual small business customers such as a dog walker, a piano teacher, and an Elvis impersonator on billboards and in social media. The tag line read, “We help businesses get big.”

These customers received so many phone calls that First Bank hired an answering service to help them handle the volume. The campaign was featured in national media.