Harris expects to reach 95 percent of its core audience — millions of people across the Chicago area — using television, radio, digital, print, outdoor and transit advertising, including this example:

The triptych says, “Bored? Pass the time with a word jumble. ULOQOSYIL HRSPIM NUJOROS EENRSE LSAIOABT. Hint: They all start with ‘S.’” The answers for the word jumble are at the bottom.

Unfortunately, the solution to the word jumble says nothing about the Harris brand. And you have to wonder, is a word jumble really that helpful to a bus riders?

“The ads are about regular life and demonstrate that Harris is committed to helping in ways that are unexpected,” said Justine Fedak, SVP/Marketing with Harris. “They also provide clarity to our customers at the times they need it most — something we have been doing for over a century in Chicago.”

A YouTube account created last week has 11 different videos, all offering some sort of semi-useful tips completely unrelated to banking.

TV ads are the cornerstone of Harris’s media strategy. The bank says it’s buying time on CBS, ABC, NBC, FOX, WGN, ESPN and CNN. The ads will appear during major news and sports broadcasts as well as top-rated programs such as CSI, Dancing with the Stars and The Late Show with David Letterman. The campaign debuted during the Chicago Bears’ season opening game against the Indianapolis Colts on NBC’s Sunday Night Football.

This is the first TV campaign from the bank in two years. The bank has a number of popular TV spots from years past uploaded by various Harris ad fans.

Alan Spindle, creative director with Element 79, the agency behind the campaign, said, “The TV spots grew out of the print and outdoor we’ve established over the past few years. So out-of-home, transit and print ads actually star in the TV spots.” When you see the ads (sorry, they are only viewable at the microsite), you’ve got to look closely and pay attention to catch the cab-top ad whizzing by:

Element 79 is the same agency that released the popular viral video “Ball Girl” for Gatorade earlier this year. The agency lost the Gatorade account despite their success with the video, which has been viewed over 1.3 million times. 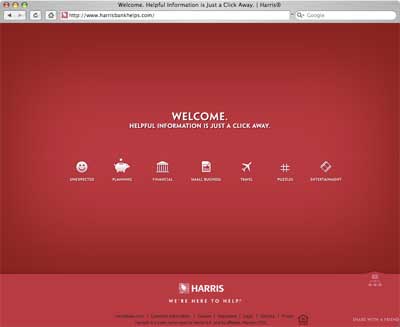 At the microsite, there are “helpful” videos and links to external, third-party websites — an interesting use of other people’s content (perhaps without their consent).

There are also five puzzles at the microsite, including word jumbles and visual riddles. All but one of the games were crafted to reinforce some aspect of the Harris brand.

The microsite is linked off the home page of the main Harris Bank website.

Harris Bank, a unit of the Bank of Montreal, has assets around $40 billion.