Subscribe Now Get The Financial Brand's FREE Email Newsletter
The campaign — anchored by a microsite, a new spokesperson named “Joe Grow,” and a refreshed community engagement strategy — dusts off a tagline the credit union rolled out back in 2007.

When the marketing team at Grow Financial FCU started work on its latest campaign “World of More” campaign early last year, they were ready to shake things up a bit.

For the last few years, Grow Financial’s marketing has been focused on delivering basic messages tied to a corporate name change. The credit union had originally been christened “MacDill Air Force Base FCU,” a moniker that endured for over 50 years. But in 2007, the board decided to switch the name to “Grow Financial” as part of an expansion strategy. The credit union’s marketing team invested much of their capital supporting the name change initiative.

“We spent a lot of time telling people we hadn’t been bought out, nothing significant had changed nor was going to change, and the same employees that were here yesterday are still here today,” explains Brian Holloway, AVP/Marketing at Grow. “Campaigns focused on messages like, ‘McDill FCU is now Grow Financial’ and ‘We’re not a new financial institution’ — that kind of thing.”

“It was time to try something different,” Holloway says.

The $2 billion credit union decided to turn its tagline, “More in Return,” into the centerpiece of its new campaign. The slogan had been unveiled back in 2007 as part of the new “Grow” brand, but the credit union hadn’t leveraged it in marketing.

“We wanted to take things to a different level, go where we hadn’t gone before,” Holloway adds.

The campaign’s strategy was to use marketing to push the conversation surrounding the Grow brand to the next stage. As Holloway puts it: “Now that people know who Grow is, what do they expect from us next?’

“We felt strongly that we didn’t have to play off the Grow name like we had in the past,” Holloway continues. “And yet the ‘more’ part of our tagline ‘More in Return’ kept coming up in our conversations, so we thought we should play off of that and see where we could go with it.”

“We wanted to show people what we can offer them while also showing them how we conduct ourselves, and not only from a service level, but from a social and community level as well.”

Online and TV ads, along with sponsorships and events, will serve as the backbone of the “World of More” campaign, although radio, print and outdoor will be utilized as well. Broadcast media will be limited to “expansion markets,” areas where Grow Financial has recently added a branch. Spots will air during shows like “The Big Bang Theory” that draw the 25-35-year-old viewer demographic.

“We decided to pull out of media where there’s a lot of clutter and go instead into places where there isn’t as much clutter and confusion,” Holloway says.

The bulk of the campaign was conceived and executed in-house, although local agency Campbell Creative was brought in to assist with some of the larger
production items like the TV and radio. 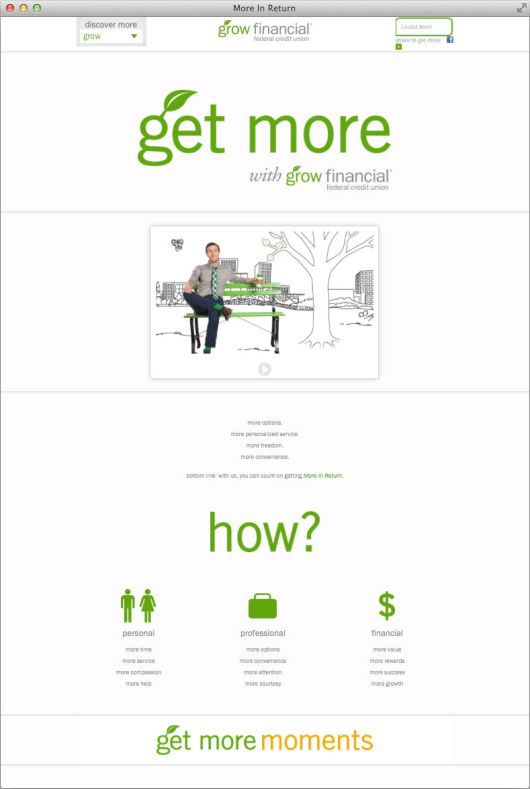 The MoreInReturn.com microsite showcases photos of what the credit union describes as “More Moments” — situations suggesting the credit union gives members more of the things they want like “baby swag,” candy and coffee. 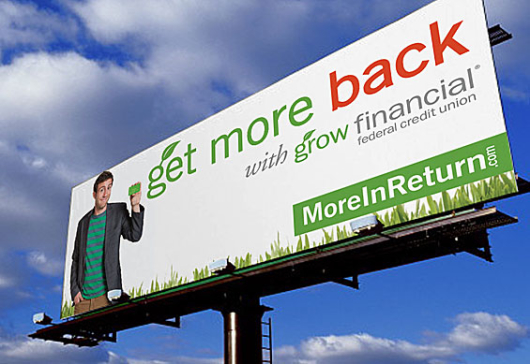 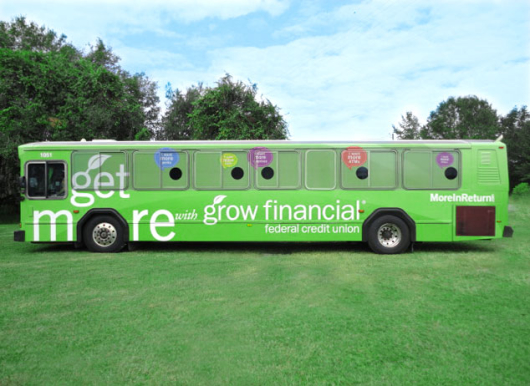 Holloway and his cohorts set straightforward goals for the campaign’s three main prongs.

The main objective with the “Joe Grow” TV spots is “to create more of a branded identity,” Holloway says. “There’s some depth we can make use of with his character by showing him and his family growing through life, going through some of the same situations that our audience also is going through, or will go through at some point.”

In terms of campaign’s online presence, Holloway says the credit union’s focus is on the paid-search side.

“If you were to search for ‘low auto rate Tampa,’ those key words probably would position us with other credit unions,” Holloway says. “We’re spending more of our budget so those key words will position us alongside banks instead of credit unions, because all of the credit unions in the area tend to be around the same rate. There’s a bigger difference with the banks in the area though. We’re paying more per click basically to make sure our ads are placed with bank competitors rather than credit union ones, because the bank’s rates should be higher than ours.”

As for the campaign’s approach sponsorships and community events, Holloway says the credit union is looking for more interaction and engagement: “We don’t just want to go to events and hand out stuff like we have in the past.”

Holloway says the current “World of More” campaign is expected to run for at least the next two to three years.

“In the past, we’d basically start from zero every time we launched a campaign,” he explains. “We’d build awareness for 90 days, six months or a year and then pull the plug on it. We’d completely disengage from that campaign’s message or look or feel, wipe the slate clean, and then start over again with something new.”

That made life difficult not only for the credit union’s marketing team, but also for the rest of its staff.

“It was hard for them to keep pace with everything we had going on,” Holloway admits.

This time around, he tried to create something with a longer shelf life, “something that was more brand-centric and that would drive interaction with as well as be relatable to our audience.”

“We also really wanted to create a consistent message for the marketplace that would develop sustainable relationships” with Grow Financial’s target audience, Holloway adds.