“The world’s most powerful investment bank is a great vampire squid wrapped around the face of humanity, relentlessly jamming its blood funnel into anything that smells like money.”

That’s what RollingStone recently wrote in an article about Goldman Sachs. Now Goldman is trying to lift its tarnished brand from the gutter of public perception with a new ad campaign.

“How a plan to help a renewable energy company grow…Ended up creating more than just megawatts,” the campaign’s copy states. “Progress is everyone’s business,” continues the headline, followed by the rest of the ad’s copy, which reads:

“Harnessing an important resource like wind requires a lot of capital. So when a renewable energy company came to us, we found investors to help them grow. Because investing in a clean energy future is not only good for the environment, it’s good for local businesses and communities. And for local employees, who have a new way to put their energy to work.”

Key Question: What does a wind farm, job creation and “progress” have to do with the myriad of black, nasty issues surrounding Goldman’s bruised and battered brand?

This is the first advertisement in a series to come from Goldman’s agency Young & Rubicam. The campaign is scheduled to continue into next year. 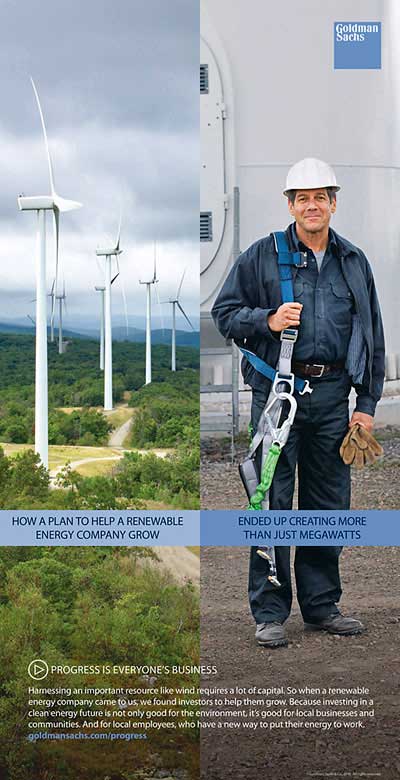 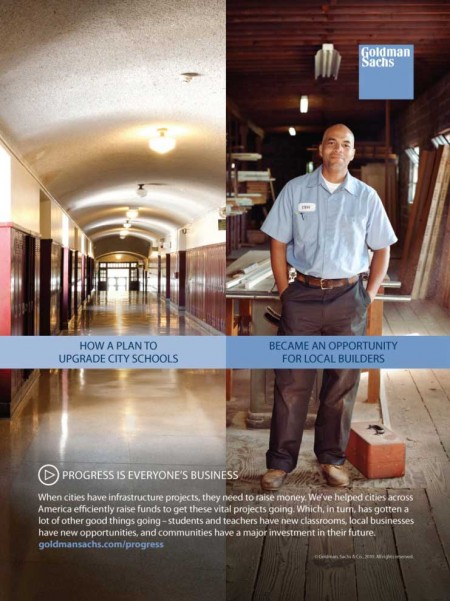 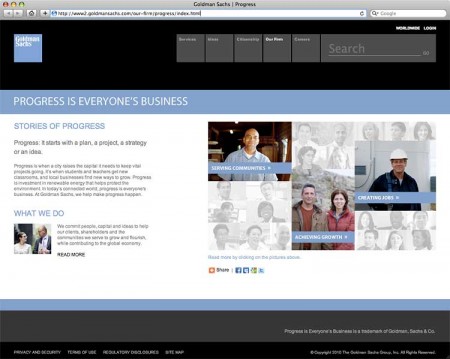 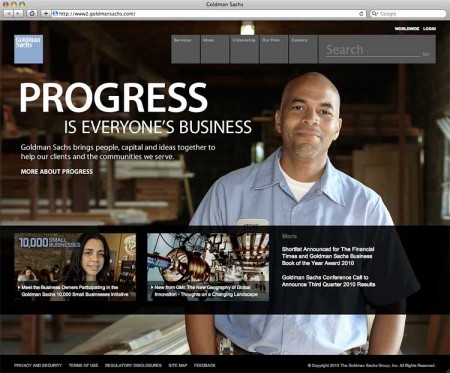 GOLDMAN SACHS – MAIN WEBSITE HOMEPAGE
Goldman has rethemed its homepage to align with the ‘Progress’ campaign.

Ads are tagged with a URL, goldman.com/progress, that points at a microsite loaded with oblique rhetoric about how progress “starts with a plan, a project, a strategy or an idea.”

“We have a lot of work to do explaining to people what it is that we do,” Goldman’s CEO said on the Charlie Rose TV show six months ago. “And we’re starting from a hole.”

Jerry Della Femina, CEO of Della Femina/Jeary & Partners in New York, told Bloomberg that the ad was “too weak, too wimpy, too mealy-mouthed” and unlikely to influence those who do not respect or like the bank.

“It just looks like a lot of breast-beating, but doesn’t really get to the heart of how has this company changed in a way that I can find them trustworthy?” Linda Kaplan Thaler, CEO of a Manhattan ad agency, told the NY Times. “My verdict is ‘wasted energy.’”

John Ellis at Clusterstock agrees. He calls the campaign “a total waste of money.”

“There is no way to dance around this ‘integrity issue.’ It must be addressed head-on,” Ellis wrote.

Ellis says Goldman is in for a world of hurt when Sony Pictures releases Inside Job, a blistering documentary about Goldman’s role in bringing the financial system to its knees.

One eco-blogger said Goldman’s ad teetered on greenwashing. She isn’t alone. “If I just saw the ad, I might think it was for a utility company,” added Russell Winer, chairman of the marketing department at NYU, in the NY Times.

The public is having a hard time swallowing the message in Goldman’s ads. The general collective attitude is “You can’t fool us.” Predictably, they have turned to the internet to uncork pot shots and snide swipes loaded with incredulity.

One blogger is holding a contest to see who can come up with better ideas for Goldman Sachs’ new ad campaign. He’s already received at least 166 entries, all of them — even the funny ones — are foaming with contempt:

One person wryly suggested Goldman Sachs simply run an ad campaign that said “Thank You.” Quite honestly, it would probably be better than the one that’s running now.