Two Michigan-based credit unions, USA and T&C Federal, expect to complete the largest credit union merger in the state’s history later this year. They will be adopting Genisys Credit Union as their new moniker.

T&C’s members will have to vote to approve the merger. In this letter to T&C members, the credit union says it is “hoping for a 100 percent approval rate,” but in an interview, T&C CEO Dianne Addington was more realistic: “Our goal is to get 80 to 85 percent approval.”

The credit union will be operating under USA’s state charter, so its members are not required to approve the merger.

The choice to go with the Genisys name may present some problems. There is already a federally registered trademark for GeniSys Credit Union Payment Solutions from another Michigan-based company, CUCorp, a wholly owned subsidiary of the Michigan Credit Union League whose use of the trademark dates back as far as 1999.

The CEOs of both credit unions are members of the MCUL, and one is on the board of directors, so maybe everything is kosher?

There’s also all the following Genisys-something-or-others, but they won’t have any real legal grounds to stop Genisys Credit Union from moving forward because they are in different sectors or different industries altogether:

Some people think a company with a registered trademark can make a federal case against anyone else trying to use that name — in any industry. It’s a common misconception. The truth is that a toothbrush manufacturer can’t sue a credit union if the credit union picked the toothbrush manufacturer’s name. The United States Patent & Trademark Office (USPTO) holds to the standard that “a reasonable person would need to be confused,” and reasonable people don’t confuse their credit union with their toothbrush.

There is a federal trademark filed under the USPTO’s “financial services” category (International Class 36) for the word Genesis (all by itself). The trademark is registered to an insurance company. The U.S. Patent & Trademark Office can consider phonetic similarities, such as Genesis and Genisys, when evaluating whether a company’s trade name infringes on a registered mark. The fact that the insurance company has the word Genesis all by itself is important.

Bottom Line: There doesn’t appear to be anyone with the Genisys name offering B2C financial services, specifically in Michigan, so the credit union’s new name will probably be safe.

Both credit unions are publishing identical information to their members, with special pages linked off their respective home pages (here and here). 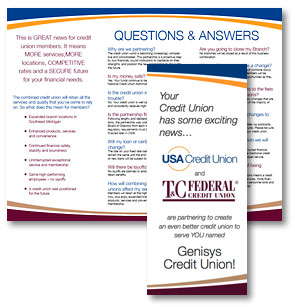 The credit unions have arguably done a good job communicating with members about the merger and name change. Here’s all the materials they have available:

The credit union’s press release says the name honors the heritage of their respective memberships:

“The name comes straight out of our roots. ‘Gen’ from General Motors members who started T&C and ‘isys’ from Unisys members who form the foundation of USA. We are not forgetting who we are or where we came from.”

The combined credit union will have $1.2 billion in assets and will rank as the fourth-largest in Michigan. The new entity will rank in the top 85 nationally in members and in the top 100 in assets.