The credit union worked up quite a backstory on their two little spokesquirrels. Chuck is a Western Gray Squirrel who enjoys making smart financial decisions. That’s why he he’s a member of First Tech Credit Union.

Leroy is Chuck’s goofy but loveable “best friend forever,” as the credit union puts it. Chuck met Leroy about a year ago while both were out collecting nuts. Leroy enjoys lounging in his hammock and naming different types of nuts, but unlike Chuck, he doesn’t always make the smartest choices when it comes to planning for the future. Leroy is not a First Tech member…yet.

First Tech introduces Chuck and Leroy in a musical TV spot. The jingle is a folksy, down-home, banjo-picking narrative (it’s along the lines of The Beverly Hillbillies theme song). The lyrics present Chuck, a member of First Tech, as the smart squirrel, and Leroy as the dumb one: 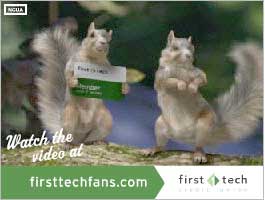 Chuck. Leroy.
These squirrels will tell a story
of friends with different views,
financial don’ts and do’s.
One works out for little gain,
while the other tends to use his brain.
Chuck’s a member of First Tech
while Leroy risks his neck.
They’ll continue on
Just workin’ and havin’ fun.
But Chuck has the help of First Tech Credit Union.

“We’re hoping these quirky characters will demonstrate First Tech’s commitment to being an advocate for members,” according to a spokesperson with the credit union’s ad agency.

First Tech is also supporting the campaign with a microsite, firsttechfans.com, as well as billboards, radio spots and online advertising. All ads are running throughout First Tech’s major regions, which includes Portland, Salem and Lane County in Oregon and the Seattle, Washington area.

Future plans include expanding the microsite with Web 2.0 features that were described to The Financial Brand as “social media-esque.”

Based in Beaverton, Oregon, First Tech Credit Union has over 157,000 members and more than $2 billion in assets.

The campaign was developed by R/West. Chuck and Leroy were brought to life with help from Hidden City, a film production company, and Hive, an animation studio. 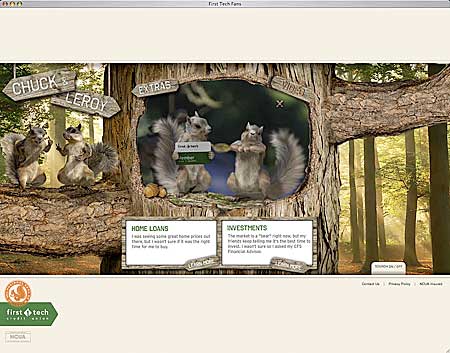 First Tech Fans
The microsite at firsttechfans.com where you can watch the launch TV spot, play three different Flash games and get tips on investing or buying a home.

“Squirrel Chateau”
The squirrels start talking in this TV spot for home loans.
Leroy is a dumb squirrel who buys a bird’s nest.
Meanwhile, Chuck has bought a squirrel chateau with the help of First Tech.