Earlier this year, Michigan First Credit Union slapped a lawsuit on First Michigan Bank for trademark infringement. (If you’re tempted to dismiss this article as having little relevance to you, at least skip ahead and make sure you read the conclusions.)

According to a complaint filed in U.S. District Court, the bank’s use of the “First Michigan” name is “in conscious disregard of Michigan First’s trademark rights, and creates a likelihood of public confusion in which consumers seeking Michigan First’s services will be diverted to the bank, and/or will erroneously believe that the services offered by the bank are offered, sponsored, or endorsed by Michigan First, when in fact they are not.”

Michigan First Credit Union has over 80,000 members and $550 million in assets. First Michigan Bank was founded in 2009 and, until recently, had only one branch and around $100 million in assets. But in April 2010, it somehow scraped together enough cash to acquire Citizens First Bank after Citizen First’s $1.1 billion in assets were seized.

The credit union’s Poulos told Crain’s Detroit Business that he’d didn’t even know about First Michigan Bank until reading about the bank’s acquisition in one of the publication’s articles. “They were such low profile, we weren’t even aware of them,” Poulos said. “Then they came out with a major marketing campaign on radio and TV.”

First Michigan Bank vows to fight the lawsuit. David Provost, president and CEO of the bank, said the complaint is “absolutely baseless” and that his bank “intends to defend this suit vigorously.”

“Our use of the First Michigan Bancorp name does not create any likelihood of confusion, particularly given the differences in the marks, the weakness and lack of distinctiveness of Michigan First Credit Union’s claimed marks, and the large number of financial institutions that use the terms ‘First’ and ‘Michigan’ in their names in varying ways,” Prevost said in a statement.

Indeed, Michigan First holds a total of five registered trademarks for “Michigan First” with the U.S. Patent & Trademark Office. The credit union first filed for trademark protection in 2001, and received registered status in 2003. 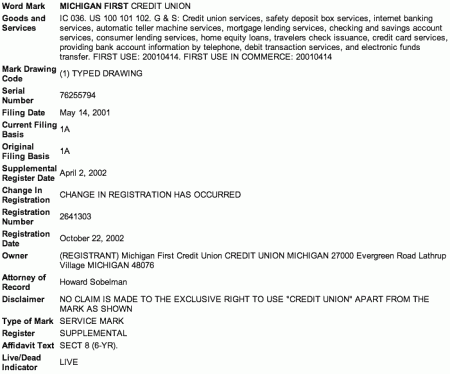 “These registered service marks are used extensively in our member communication and promotions, creating strong recognition with both our members and the public,” said Michael Poulos, President and CEO of Michigan First. “We have taken all the necessary actions to protect these assets, which are consistently used for all of our banking and other financial services, and we will continue to take all necessary actions to protect them.”

Bottom Line: First Michigan Bank will likely lose, but not without burning a mountain of time, cash, energy and vital resources on an uphill fight. Ultimately, if the bank isn’t forced to change names — at additional significant cost — it would be a miracle. If First Michigan Bank had invested around $1,000 or so on trademark due diligence back when they chose their name in 2009, they would have almost certainly sidestepped this nightmare. Hopefully the bank will wait to change the name on the signs of the 22 Citizens First branches it just acquired until after this lawsuit is resolved, otherwise First Michigan Bank could be doubling-down on its losses.

Michigan First Credit Union, on the other hand, has played everything by the book. They secured their trademarks early, and are defending them with zeal and vigor.

Be careful with new names and name changes, even for things like products and services. Make sure they aren’t already being used by someone else. That means checking the white pages, the internet and the USPTO database. The Financial Brand has written over and over and over and over about the pitfalls of naming trademarks. If you haven’t yet taken the message to heart, here is one more reminder: Register your financial institution’s trademarks now. Today. And always hire a lawyer who specializes in trademark law. Dire consequences await those who choose to go it alone.