Banks and credit unions face a tough challenge in hiring marketing operations and technology professionals — and an equally tough challenge holding onto them. More than three quarters of the respondents to a martech job survey have received a promotion within two years or less. The same survey also confirms there is a gender gap in the martech field, not only in terms of salary levels in the highest positions, where women make less than men, but also in terms of promotions, where men are promoted more frequently.

The trends are significant because financial institutions have no choice today but to evolve their marketing functions. And an increasingly important component of the change is centered on marketing operations and technology.

Financial marketers must incorporate personalization into nearly every product and service offering and communication. Thus, the need for employees with the appropriate skill sets to make maximum use of new digital tools has never been greater. That, and keeping up with them as they continue to evolve rapidly.

More than four out of five consumers (84%) say treating them as a unique individual is key to winning their business, according to Salesforce. Further, 79% say the experience a company provides is as important as its products and services.

By 2020, “micromarketing using digital channels and highly personalized content will be the norm, with results measurable by the hour as opposed to by the quarter,” states Jim Marous, Owner/Publisher of The Digital Banking Report, and Co-Publisher of The Financial Brand. Product and financial goals will be met incrementally in real-time as opposed to being based on product promotions, says Marous.

There is no end in sight to the surge of new marketing technology. Simply keeping up with, evaluating, and implementing the array of martech tools is a major challenge, especially for marketing departments at small and midsize financial institutions. The 2019 version of Scott Brinker’s Marketing Technology Landscape, for example, lists more than 7,000 marketing technology solutions.

But marketing operations goes far beyond riding herd on tech in some financial institutions. It can include being champion of customer service, strategic planning, process improvement, and more. Often this hinges on the size of the bank or credit union. Marketing operations staff can include generalists who build email campaigns, evaluate and integrate new marketing tools, and oversee campaign reporting. At larger institutions, the skill sets are even more specialized and can include financial and data analysts, data scientists, and custom tool developers.

In their latest survey of marketing job functions and salaries, chiefmartec.com and MartechToday categorized the respondents in three broad functional descriptions:

The number of marketers in the first and third categories increased year to year while the second category decreased. More than half of the respondents (60%) were at the director or manager level, and just over two thirds (67%) report to Marketing. 8% and 6% report to Digital/E-commerce or to IT, respectively. (Note that 15% of respondents work for an agency or service provider.)

As evidence of the fast-moving nature of marketing operations work, more than three quarters of participants (78%) have received a promotion within two years or less, with more than a quarter receiving one within six months. This includes promotions due to switching employers. 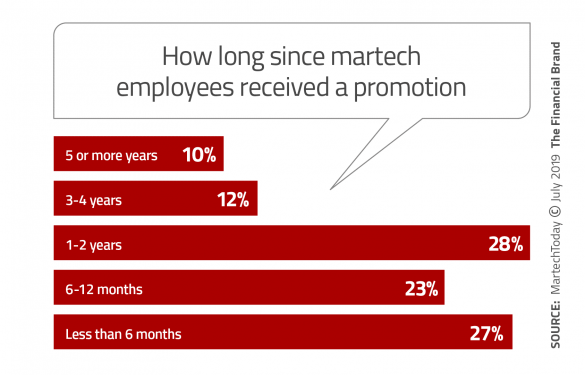 In one of several indications of a gender gap in the marketing field, the survey notes that while men and women earn promotions about equally in the first year, after that the rate of promotion for women slows compared to men, with close to double the number of women reporting that it’s been five years or more since their last promotion (13% to 8%).

As the tables show, the average base salaries for marketing operations/technology jobs is higher across the board in the U.S. compared to worldwide, with the exception of the vice president level. The survey authors note that pay varies based on the size of the organization.

Note that LinkedIn indicates a median salary for Director of Marketing Operations for the finance industry of $129,000, significantly higher than the figure for all industries of $115,000. However, the sample size was very small. Similarly, the median salary for Marketing Operations Manager in the finance industry shown on LinkedIn was $90,000, slightly higher than the general average of $82,000. But, again, based on a much smaller sampling.

The MartechToday research found that base salaries were essentially flat between 2018 and 2019 for marketing operations/technology jobs, with 54% reporting a base salary of less than $100,000 compared with 52% the year before. There had been a noticeable drop in marketers in the lowest pay category, however.

In addition to the difference in rate of promotions between men and women, mentioned earlier, the MartechToday survey highlights a pay disparity between men and women in the higher pay ranges for marketing operations positions. In 2019, 51% of men reported a base salary of $100,000 or greater, while just 39% of women had salaries in that range. As the chart shows, the gap is most noticeable at $125,000 level. 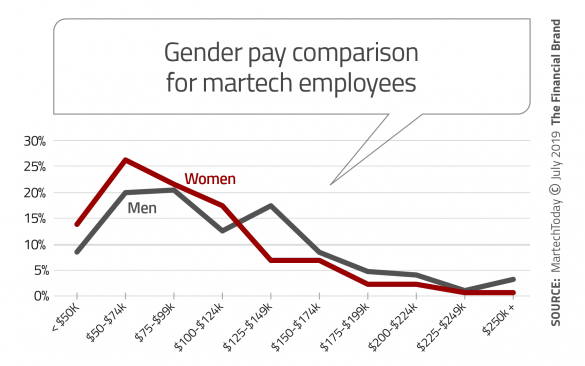 Possibly a factor in the gender pay disparity is that significantly more women than men describe their marketing job as operations focused (33% women to 18% men), whereas the opposite is true when the job is described as technology focused (26% women to 34% men). When the job is described as a combination of operations and technology, the results are slightly closer (41% women and 48% men).

The gender gap can be seen in terms of job levels as well as in salaries. Women overindex in the “staff” category but underindex on the titles of “director” and “senior vice president/C-level” in the MartechToday survey. Men and women survey respondents were closer to parity in the categories of “manager,” “senior director” and “vice president.”