One winter day a few months ago, Roger Sundermeier, VP/Marketing Officer for FAB&T, was having lunch with some of his coworkers. The group was discussing things they wish they had time to do differently around the bank when the subject of the kids account came up.

For years, FAB&T’s kids’ savings account had been the “First Bucks Savings Account.” This account had a huge dollar bill (named “Buck”) for a mascot. The idea was that every time a child made a deposit, they would receive some trinket — pencil, crayons, activity sheet, etc. The problem was that branches would run out of items to give to kids, or the kids would wind up receiving the same item over and over again. How many times can getting a pencil be fun, right?

“The single biggest thing to happen to us this year has been the rebranding of our kids savings account.”
— Roger Sundermeier,
FAB&T VP/Marketing

Over lunch, Sundermeier, along with FAB&T employees Larry Daniel, SVP/Director of Retail Banking, Staci Bock, and Sarah Pike, did some quick brainstorming. They soon realized they had a new financial superhero to replace FAB&T’s “Buck.” They wanted a dog. After all, dogs personify many of the bank’s values: loyalty, compassion, trust.

Cash In, Buck Out

FAB&T set out for the local animal shelter to find their new spokesdog. They found a yellow lab/retriever mix that was a little more than a year old. It appeared that she had been hit by a car as she favored her back left leg. “Just spending a few minutes with her, we knew that she was the one,” Sundermeier told The Financial Brand. 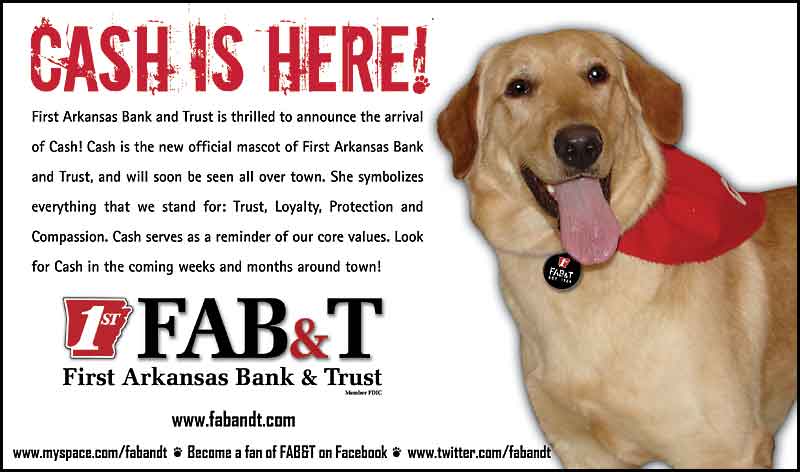 When FAB&T adopted “Sheila” (now named “Cash”), the bank made a
special announcement in the media to draw attention to overcrowding in
animal shelters, especially during these difficult economic times. 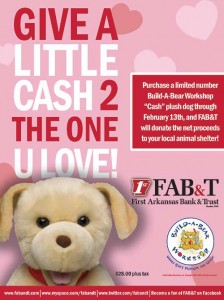 launched a teaser campaign, both internally and externally. “It was hilarious to listen to people trying to figure out what Cash was all about,” Sundermeier said chuckling.

“The plan was to take ‘Cash’ into schools, nursing homes and community events,” Sundermeier said. “She would reinforce the FAB&T message, as well as be a great icon for our brand.”

FAB&T partnered with the Build-A-Bear Workshop for a Valentine’s Day promotion called “Give Cash 2 the 1 U Love.” FAB&T sold plush lab dogs from Build-A-Bear Workshop — with branded FAB&T t shirts, of course — in branches. The net proceeds from the promotion were then be donated to local animal shelters. After a week of sales, FAB&T had over 240 dogs, with over $2000 dollars being donated to local shelters.

FAB&T has expanded the idea into a fully-blown kids marketing campaign, including a new kids savings account built around Cash and “The Crew.” 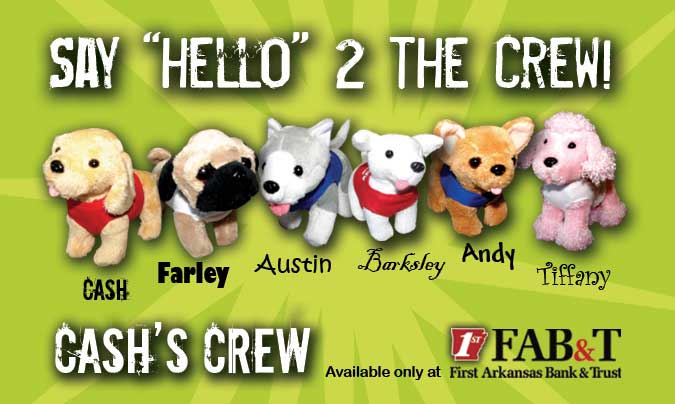 “The Crew”
Farley the Pug, Austin the Husky, Barksley the Westie, Andy the Chihuahua and
Tiffany the pink Poodle. Combined, the initials of each dog’s name spell FAB&T.

When kids open an account, they receive a plush Cash dog and a card that is stamped at each subsequent deposit. After the appropriate number of deposits, their card can be redeemed for an item. The first card is redeemable for a plush carrier tote (in either denim or pink crown). They then receive the next card in the set, and so on.

“The hope is to create a ‘Happy Meal’ type of excitement,” Sundermeier said. “Where the kids hound parents and grandparents to go to the bank.”

Taking it to the next level 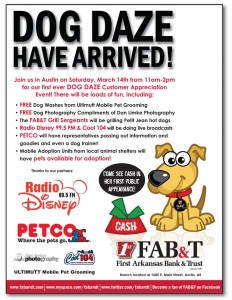 FAB&T has gone so far as to organize its Customer Appreciation Events at branches around dogs. The first one, which was called “Dog Daze” was held in March at the bank’s Austin, Arkansas branch.

“Never would we have thought it possible that a little community-style bank with 28 branches in Arkansas would have the ability to partner with national brands such as these,” Sundermeier said.

There was a nice bonus from having a pet photographer. All the photos came back to the Austin branch, giving employees (1) a chance to call customer’s, and (2) a chance to cross-sell them once they came into the branch.

“The event exceeded even our wildest imagination!” Sundermeier exclaimed. “The police in the town had to block off streets and direct traffic because of the response!”

FAB&T plans on doing four or five more similar events this year throughout its markets.

Tip of the Hat: To Roger Sundermeier, for his time and cooperation on this article, and to FAB&T for doing good by dogs in animal shelters. [Editor’s note: I have seven dogs, three from shelters.]