The Financial Brand sat down with Trent Mason, CMO of Erie General Electric FCU, to talk about the credit union’s unique partnership with a local semi-celebrity BubbaLuv. BubbaLuv, who describes himself as “the biggest fan of many Erie sports teams,” has made a somewhat of a name for himself as a portly, passionate “supafan” with oversized sunglasses, a black sequin cape and a gigantic afro.

Who is BubbaLuv? What’s his background?

Trent Mason (TM): His real name is Donnell Jordan. Donnell works at a plant making the fuel that powers steel mills. It is one of the toughest jobs in all of Erie, and in a blue-collar town, that’s saying something!

How did you meet BubbaLuv?

TM: The local NBA Development League sat us together courtside one night. Their CEO always tells us he is the “matchmaker.” He knew Bubba loved credit unions, and I had already said I would love to watch a game with the guy because he was a lot of fun to be around…and my kids loved him. As we were sitting together during the game, his credit union membership came up and I said jokingly, “You should be in our next commercial!” It was a match made in heaven after that.

TM: We are always looking for fresh ways to promote the credit unions to Gen-Y, and BubbaLuv already has many young followers. Because he had a young adult following and he was a credit union member for over two decades, it was a great fit.

We never sought to make him a mascot or spokesperson, we just wanted to feature him cheering on our CEO in a commercial, but this has grown to a lot more than that.

We have an agreement to be able to request that Bubba join us at events through 2012. He launched July 1, 2010, so we have a quarter that we have been tracking his results and comparing them to historical data. We squeezed a LOT of stuff in one quarter as his Facebook page and pictures tab on his website will attest. People ate it up! 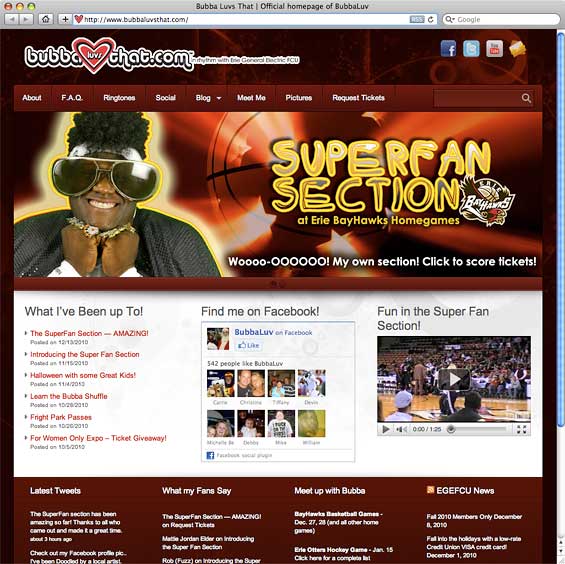 The BubbaLuv microsite bubbles with personality and positive energy. It’s got everything you would expect, including all the modern social media conveniences. The credit union is mentioned many times, with plenty of hotlinks.

How did your staff and management react when you presented BubbaLuv internally?

TM: I had to obviously win over my CEO. I will admit, it took some convincing at first because she had never seen BubbaLuv dance or perform with the team during NBA events. My CEO needed only one game to see that this guy in action — a ton of energy.

Admittedly, some of our older staff took longer to warm up to Bubba than I thought they would, but that could also be my fault for not helping them see the man behind the glasses sooner. Once we started having Donnell meet the staff, they knew he believed in the credit union as much as them. Much credit goes to our staff and our Board too for believing in the power of a Super Fan.

What kind of promotional events has the credit union done with BubbaLuv?

TM: He averages about ten events per month with us, but he goes to many of his own functions in his character.

He has his own section now at the NBA D-League games. We sponsored it and get 100 tickets each game for fans to sit with Bubba and go bananas. Of course, we have many ways to then turn casual fans into CU members but I don’t want to give away all of our secrets… Think “Willy Wonka and the Golden Ticket” though.

This summer we did something called “Win a Bubba-Q” — a full-on BBQ with a full afternoon of grilled food and all the Bubba you could handle.

We printed up flyers and coupons for him to refer us business. We incorporated coupons with a traceable incentive. He gets credit for the referral and the member gets a pretty fantastic deal that they wouldn’t get anywhere else. In fact, I have had many members call me and want to find out where Bubba is going to be so they can get a coupon! That is gold for any marketer!

The great thing about working with Donnell is that he wants to promote this character BubbaLuv, so he is out and about all the time doing other things. He has done some of his own benefits to raise money for a family who perished in a fire, school supply drives, etc. The agreement with us has always been to jointly promote each other as best we can. Its authentic on both sides, so it works… We love this guy, he loves us. It’s a lot of fun!

What’s the reaction been? What are members saying?

Complaints have been few. Some members will say on occasion that they don’t like that we created him. But we also get complaints when we open new branches too, and just about with any of our campaigns, so I let it roll off my back.”

This one time, a lady came in and told me that she didn’t like Bubba and hated seeing “a large black man jump around” in a commercial with our CEO. She told me that she had been going around her office telling people that we should start taking things more seriously. But she didn’t know Bubba was a real guy. I took her to the website and she was won over.

We want members who get that having a Super Fan is helpful to the credit union and we are not afraid to explain our position to them. I tell my staff to always remember that: “Some will, some won’t. Who cares? Move on!”

Halloween was a lot of fun because people were calling me on Halloween saying that little Bubbas were going door to door. To me, that was a huge moment.

I got a call today from a prominent business man who told me that he gets comments all the time from the African American community saying that they appreciate all Bubba is doing in Erie. About two minutes later, an employee showed me a mobile message from a friend of a little kid wearing a BubbaLuv headband. Evidently all the kids were talking about him in a positive way so she wanted us to know. Some campaigns and ideas have their own mini tipping points and it’s fun to be on the crest of the wave. It’s really is blowing up!

What about results? ROI?

TM: The best day was when I pulled all the checking account numbers for the last four years and saw that the quarter we worked with Bubba had the highest checking account signups of any period. I drilled a little deeper and found that an amazing 60% of new checking accounts in the period were between the ages of 18 and 30 — right in the sweet spot for our target audience.

I utilize Raddon’s Integrator MCIF system to track member acquisitions. My primary target is members ages 18-30 and my primary delineator is Checking. From there, I continue to look at overall member and household profitability of any member who signed up with a Bubba coupon or who was part of our checking lift during the campaign. I will be watching closely in the coming months for additional product utilization, especially with loans amongst these young adults 18-30. The thing to remember is that Bubba is one aspect of our overall approach. We send targeted direct mail that is product-centric to the same consumer segment.

TM: We plan on featuring Donnell out of costume in a commercial really soon (per member requests).

Donnell has started coming to work functions too and our staff love him! He really is part of our CU family. On his Facebook page there is a nice picture of him and his mother from our recent employee Christmas party.

The next phase is a Bubba Debit and we are working day and night on a financial literacy hub that Bubba will help promote. Also in the works is a potential Bubba Auto Sale with him starring in a commercial. We have several interested dealerships that want the joint exposure, and that kind of cross-promotion is the name of the game.

What advice do you have for credit union’s considering a similar approach?

1.) Be ready to stand up for what is right. We have had bankers from national banks take really repulsive shots at our campaign and try to publicly defame us.

2.) Any marketer considering an edgy campaign should ask themselves if they have the support of a courageous CEO, and one heck of a marketing team behind them. It also helps to have the buy-in from your executive team.

3.) Don’t t be afraid of success, and nor telling some people to take a hike if they don’t like your targeted approach. Even if you have to drag some people kicking and screaming towards something that helps the entire credit union, do it!

What surprised you about your BubbaLuv partnership?

TM: It was pretty intriguing how much race had to do with this campaign. We were maybe a little naïve to that fact in the beginning and we were wishfully thinking that it wouldn’t matter. There are lots of disappointments when people get that way. Then again, there are also a lot of great moments when you get thanks for not being afraid to feature an exceptional man irrespective of something so arbitrary as the color of his skin.

What would you do differently?

TM: If I could go back, I would continually remind people that we didn’t invent Bubba’s character. I would also get the “man behind the cape” out there on day one to tell his own story so people could appreciate what an amazing person he is. 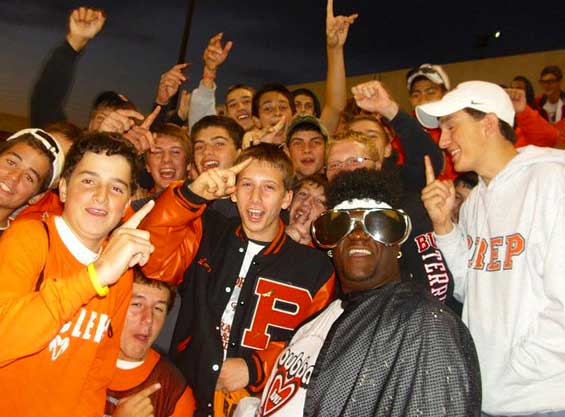 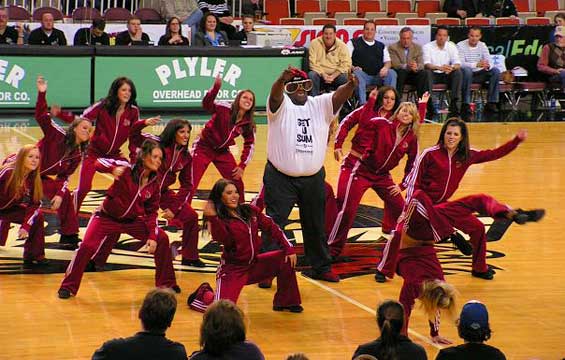 BubbaLuv Facebook page has 542 fans of the Erie supafan. Bubba has a ton of photos in his Facebook albums. You can also connect with BubbaLuv on Twitter. 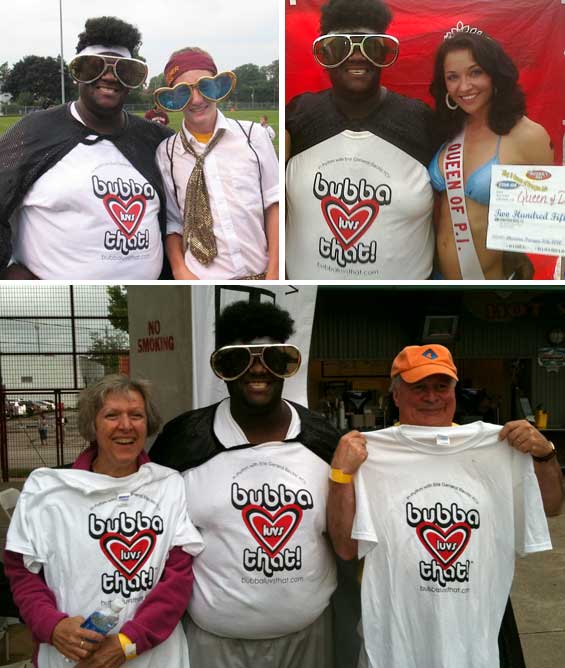 BubbaLuvs that camera! Even credit union board members got their picture taken. 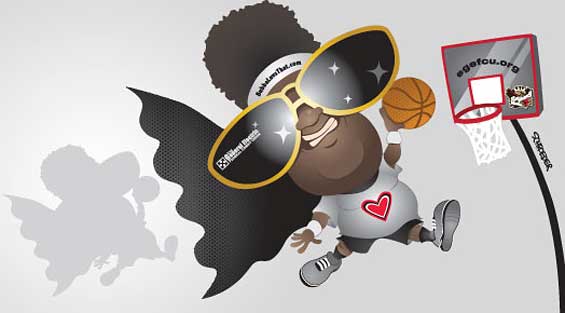 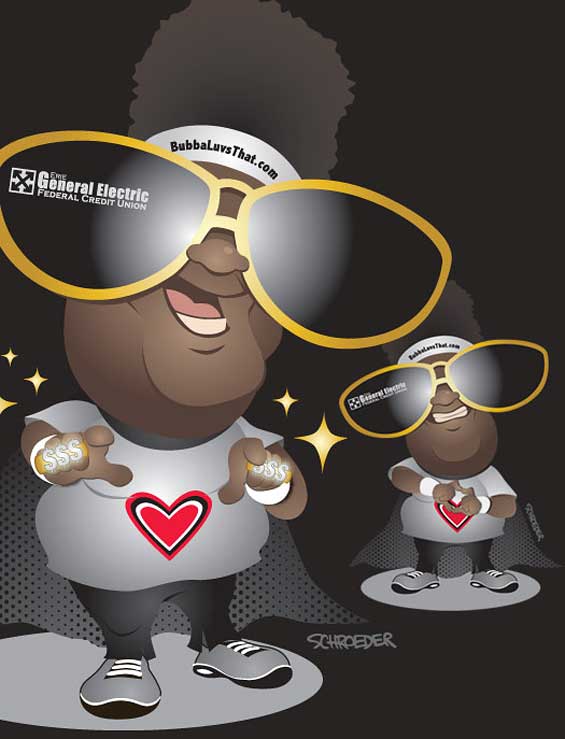 BubbaLuv was just caricaturized by Erie artist Chris Schroeder for an upcoming promotion.