Subscribe Now Get The Financial Brand's FREE Email Newsletter
Earlier this year, the Economist magazine published one of the most exhaustive journalistic explorations of the retail banking space ever undertaken. This sprawling series of essays is a must-read for anyone in the financial industry. 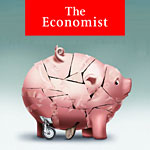 A small army of correspondents at the Economist, lead by chief reporter Jonathan Rosenthal, pulled together over a dozen excellent chapters covering everything from branch design and big data, to online channels and digital wallets. Running in excess of 20,000 words, it’s about one-fifth the length of an average novel — and all about retail banking! Don’t be surprised if it takes you a while to get through all this material (it took The Financial Brand a couple months), but it’s definitely worth it. Here are (some) of the best sections.

Retail Renaissance – The internet and mobile phones are at long last turning boring old retail banking into an exciting industry.

Withering Away – Branches, once the all-important focal point of banks, will become far less numerous — and look very different.

From Great to Good – Banks are still able to make money, just less of it.

World, Here We Come – The biggest beneficiaries from the retail renaissance will be large international banks.

Opportunity Gently Knocks – What new disruptive players stand to gain from the worldwide shakeup in banking?

Back at the Branch – More Swedish lessons for the banking industry.

Dispatches From the Hothouse – Lessons from Spain, the world’s most competitive banking market.

Big Data: Crunching the Numbers – Banks know a lot about their customers. That information may be valuable in more ways than one.

Over the Sea and Far Away – The business of sending money across borders is lucrative, fast-growing and ripe for change.

Private Pursuits – Many banks are hoping that wealth management can restore their fortunes.

Branches: The Future’s Uncertain, But The End Is Always Near

According to the Economist, there are 10-20% more bank branches today than there were a decade ago, a worldwide phenomenon that excludes only a handful of the richest nations.

Unlike the bricks-and-mortar bookshops, travel agents and record stores, banking providers have been surprisingly insulated from the impact of the web. While companies in other industries have been effectively wiped out by online rivals, banks have largely escaped the internet undertaker. While financial institutions have embraced many of the trappings of digitization — online and mobile banking, for instance — retail banks have continued to invest more effort in bricks than in clicks over the past decade.

The trend may soon be reversing itself though.

In America, transactions conducted in bank branches are now falling by about 5% a year, notes Sherief Meleis of Novantas. Meanwhile, income plummeted in the wake of the financial meltdown, which Meleis says pushes at least 15% of current branch networks over into unprofitability. The pressure banks now feel on their bottom lines will cause many to shutter branches, Meleis predicts.

Pedro Rodeia of McKinsey agrees. “You will see people closing a significant number of branches,” he says.

Industry observers have long been predicting a “hollowing out” of the middle in banking, in which only the very big-and-efficient and the very small-and-local would survive.

Mike Poulos of Oliver Wyman, a consultancy, expects the number of banks in America, currently some 8,000 or so, will drop by 2,000 or more as a result of the crisis.

The conundrum facing most banks, notes the Economist, is that while branch utilization is down, banks have yet to find an equally good way of drawing in new customers. Branches are what they know.

That’s why banks won’t be killing their branches off anytime soon. Instead, branches will slowly evolve. In banks’ quest to reinvent them, experiments will include coffee and iPads, and the word “branch” will rarely used.

If there are two things on which everyone seems to agree, it is (1) that the once all-important bank branch network will be slashed, and (2) branches will look very different in the near future.

“The death of bank branches, and in fact banks, has been prematurely foretold many times,” says moderator Jonathan Rosenthal, kicking off an excellent point/counterpoint discussion on the Economist website. “Are branches obsolete? And if not, what will they look like, and how many of them will banks need?”

The debate pits Brett King, an outspoken anti-branch critic, against Mark Weil, who defends the future of branches.

Meanwhile, Mark Weil, the head of EMEA financial services at Oliver Wyman, asserts that — far from killing the branch — new technology is revolutionizing banks’ physical locations. He says banks should turn their branches into places where customers have space to talk about their big financial decisions.

The debate kicked off some fiery, insightful comments from observers.

“The branch has a very real place in the future of banking,” wrote Jim Craig. “The format of the branch and what happens in a branch are in dire need of change, however.”

“There are regular discussions about the branchless future but branches are required for advice, sales and service and, more importantly, trust,” added Chris Skinner, Chairman of the UK’s Financial Services Club. “Regardless of how irrelevant branches may be in terms of distribution, any bank that wants to get new account openings has to have a branch.”

”The idea that banks need big, expensive physical locations to have big financial discussions with their bankers ignores everything that has happened in the digital era,” added Augie Ray, another reader. “People who ten years ago thought they’d never even trust their banking information online are today banking on from their cell phones. The idea of depositing a check on a cell phone wasn’t even an idea five years ago. The demand for branches will decrease. Fewer people will need them. The economics will be impossible to sustain.”

“This simple rule—that the bank with the greatest branch density in a given market will win the most custom—has defined banking for generations.”

Despite the predictions of the death of branch banking, in most countries the number of branches has increased over the past decade. In America, which is still the world’s richest banking market, the number of branches and offices has risen by 22% since 2000, to almost 90,000. In Europe, too, the number of bank branches has increased steadily over the decade, rather too much so in Spain and Italy. Spain, for instance, has some 43,000 branches, about half as many as the whole of America, a country with almost seven times as many people and a land mass 20 times larger than Spain’s. 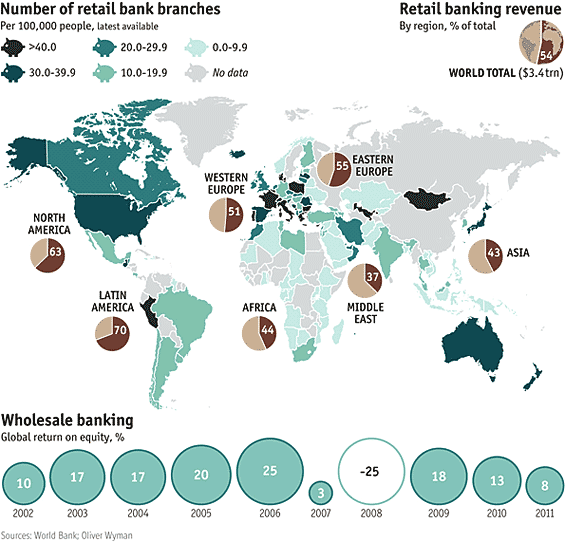 The Emotional Comfort of Branch Proximity

Consumers possess an inconsistent psychology when it comes to branches. Study after study has shown that branch proximity is the number one factor driving most consumers’ selection of a banking provider — usually within five miles (or less) from home or work. Yet most consumers hardly ever step foot in a branch again. They say one thing — that branches are important — but do another.

Something John Stumpf, Chairman and CEO of Wells Fargo, said in the Economist article might shed light on this paradoxical psychology.

“You might not go back to visit that bank again,” Stumpf said. “But that location is where you think your money is.”

Think about it. Consumers like the reassurance of physical locations. Why? Because people are deeply attached to their money. They need the emotional security of a nearby branch so they can feel their money is being stored in an easily accessible location — a metaphorical extension of stashing cash in the mattress. They imagine bankers have stacked their physical dollars away in some part of the safe designated just for them.

Consumers probably don’t see banks for what they are — virtual warehouses of data and digital dollars distributed across a vast network. They probably think they can just pop down to their local branch and ask the bank to hand them over their stack of physical dollars anytime they want. Little do they know that if everyone went to the bank at once and all of them wanted their money back, most customers would go away empty handed. Nevertheless, consumers like the idea that their money is somewhere close, available and safe.