Subscribe Now Get The Financial Brand's FREE Email Newsletter
Financial marketers will be spending more and more on paid digital advertising in the next five years. This exclusive report looks at the digital advertising trends that will be reshaping the banking the industry in 2015 and beyond.

Ad spending on digital media by US financial institutions industry will top $7 billion in 2015, a 14.5% gain over 2014, according to a report from eMarketer.

For the foreseeable future, banks and credit unions will continue to shift more and more of their budgets away from traditional- and offline channels and towards online and mobile media. Growth rates in digital advertising budgets may ease slightly as time passes, but eMarketer forecasts a healthy 11.7% compound annual growth rate between 2014 and 2019. By 2019, eMarketer estimates that the US financial industry will spend over $10 billion annually on digital advertising. 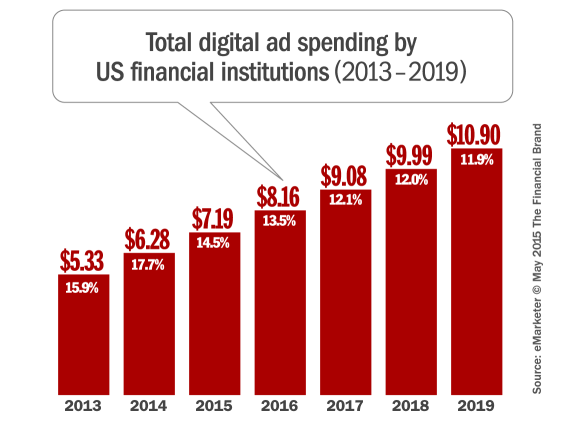 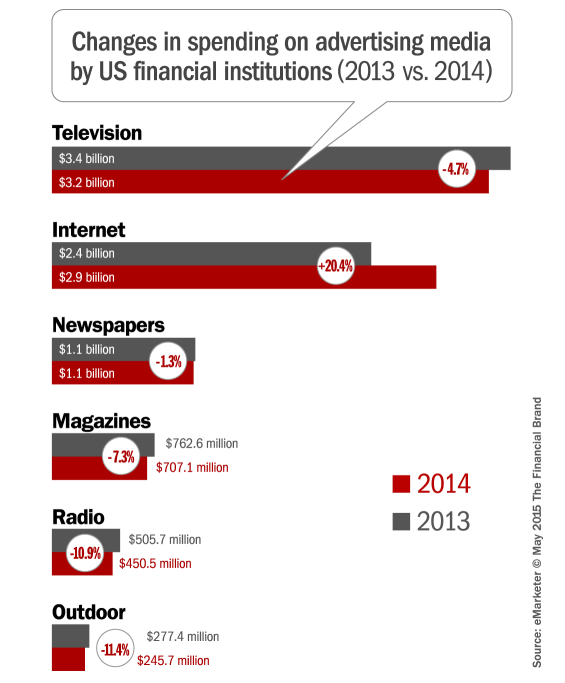 Spending figures from Kantar Media show that digital advertising is white hot in the banking industry. While traditional media channels saw significant decreases from their 2013 levels, online advertising (which Kantar defines as desktop display and paid search ads) grew by 20.4%.

Digital video is another bright spot, across both desktop and mobile, with financial marketers projected to spend $755 million on the format in 2015. Though the bulk of video ads by the sector will be short pre-roll formats, the desire to tell stories and engage audiences is leading to longer videos tied to branded content sponsorships. Spend some time poking around YouTube and you’ll see what eMarketer is talking about — even credit unions are using online video to retarget visitors to their websites. 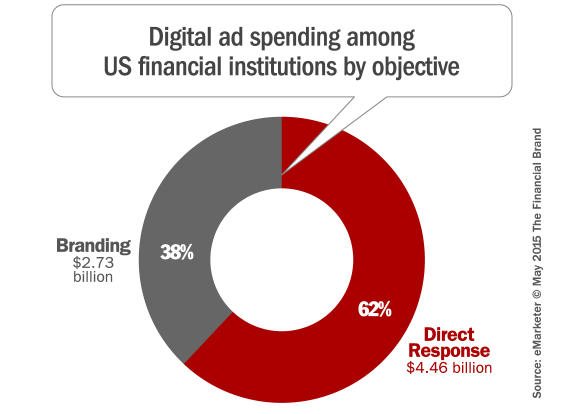 Search advertising will continue to be the dominant paid media format for financial marketers in 2015, to the tune of $3.40 billion — or 47.3% of the US financial services industry’s total digital ad spending. eMarketer estimates that paid digital display will follow closely behind, with $3.02 billion of the financial category’s ad dollars projected to flow to the format by the end of the year.

Consumer behavior is the primary reason why paid search continues to be attractive to financial marketers. A December 2014 survey of US millennial internet users by Principal Financial Group found web search to be the most preferred channel for researching products and services offered by financial institutions and insurance companies.

Though searches on smartphones had the highest CTR, searches performed on desktop computers and tablets performed better when it came to conversion. This finding highlights some of the ongoing challenges related to optimizing search ads for smaller screens.

As consumers spend more time on mobile devices and accessing their accounts with smartphones and tablets, eMarketer says financial institutions are pumping money into to all corners of mobile, including mobile display, mobile search, mobile video and even programmatic buying of mobile media.This year, financial institutions will spend $3.49 billion on mobile advertising alone, eMarketer projects — just about half of the industry’s total digital ad investment. At this rate, financial marketers will have increased their mobile outlay by more than half compared with 2014, aligning with overall market-wide growth trends in mobile advertising. 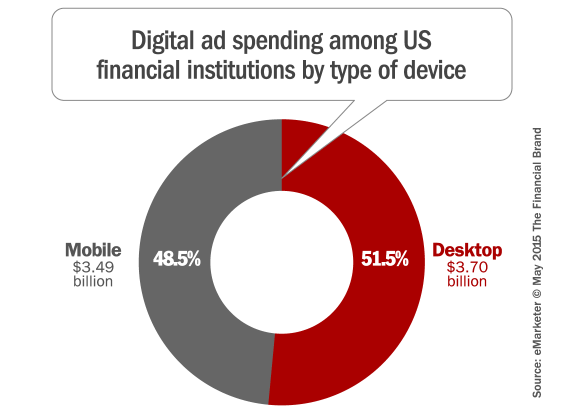 According to February 2015 findings from Duke University’s Fuqua School of Business, financial marketers are dedicating more of their marketing budgets to social media. It commanded an 8.8% share, up from 5.9% a year earlier. Spending increases may not be entirely due to greater marketer investment, however. Higher costs for finance-related ads on social networks may be one reason why social budgets will go up in the next few years. Nevertheless, eMarketer says that finance, banking and insurance firms have no plans to slow their investments in social media over the next five years.

Looking specifically at metrics for in-feed and in-app mobile ads on Facebook and Twitter served by social ad platform Ampush in Q4 2014, the financial category had by far the highest CPM rates at $12.24. Cost-per-click (CPC) rates were also relatively high at $0.82. But CTRs, at 1.85%, were also higher for these types of ads compared with standard mobile display ads—perhaps justifying the higher cost to advertisers.

Other data corroborates the higher engagement rates (and higher costs) of social ads for financial firms. Clickthroughs for Facebook ads in the financial category in Q4 2014 ranged from 0.56% (worldwide, served by social ad platform Shift) to 1.14% (US, served by agency Kinetic Social).