Subscribe Now Get The Financial Brand's FREE Email Newsletter
TD Bank is the undisputed king of guerilla marketing in North America's banking industry. In their latest campaign, they gave 24 customers $30,000 and 24 hours to work miracles in their communities.

TD Bank is no stranger to guerilla marketing tactics. Since at least 2008, they have been handing out everything from free umbrellas to pizzas as part of publicity stunts designed to differentiate the bank and raise brand awareness. In 2014, they created a clever campaign using a tricked-out ATM that gave customers super-personalized thank you gifts. The four-minute video memorializing the campaign went viral, amassing over 20 million views.

Most recently, TD selected 24 customers in 24 different cities — one a day for 24 days — and gave them only 24 hours to undertake projects that would benefit their communities most. Each person was given roughly $30,000 to make their project a reality. They called it the #MakeTodayMatter campaign.

“We are trying to do things we are proud of and that appeal to a sense of purpose.”
— Vinoo Vijay, CMO/TD Bank

How did TD choose these people? And how could they be sure the money wouldn’t just disappear? The bank first asked customers across North America to see what they might do to give back to their communities if they had the money, including an informal poll posted on Facebook. After narrowing down a short list of the most inspirational ideas, TD then relied on branch employees and their knowledge of customers to help make the final selections.

“The passion our customers have for giving back is just amazing,” Dominic Mercuri, EVP/CMO of TD Bank in Canada said in an interview. “We didn’t know if this idea would work. Would people drop everything to bring to life their idea? Turns out — yes, they would.”

But why only give people 24 hours to work miracles in their community? Why not give them more time?

“Part of what we think is the beauty of #MakeTodayMatter is that it all took place in such a short period of time,” Mercuri said. “It made the achievement of each act more concentrated and meaningful to everyone who participated.”

Edwin Ross, an elementary gym coach from Florida, helped equip a struggling football league by buying a truckload of much-needed gear, along with the chance to hang out with former Miami Dolphins players.

Michael Mulligan in Ontario who himself had been confined to a wheelchair for most of his life helped create a more accessible home for his disabled neighbor. His neighbor Rose hadn’t been able to leave her house for four years because it didn’t have a wheelchair ramp. One day and $30,000 later, Rose was outdoors and mobile again.

Valerie Crabbe, a Philadelphia mother of eight, hosted an extravagant gala affair for foster girls to show them that they’re important and beautiful. The Cinderella event involved makeovers, limousines, and a fancy dinner, along with gifts like iPads.

Other projects included everything from trail restoration to puppy adoptions. You can read about all 24 projects at a special microsite TD built specifically for the #MakeTodayMatter campaign. 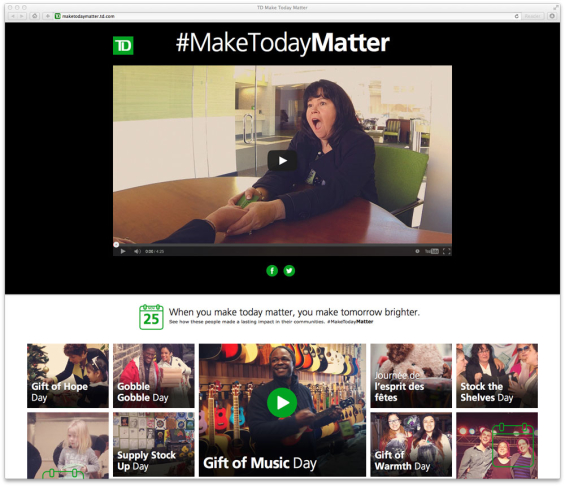 TD Bank made a mini-documentary about the #MakeTodayMatter campaign that has already been viewed over 5 million times on YouTube. A dozen posts about the campaign on the bank’s Facebook page garnered over 5,000 ‘Likes,’ 300 comments and 1,000 shares.

Vinoo Vijay, EVP/CMO at TD Bank in the U.S., says social media — video in particular — is the ideal medium to tell this kind of story. “All of our social media channels worked together on this,” Vijay said in an interview. “Video was particularly important.”

TD Bank says plans are underway to follow up its viral homeruns like #MakeTodayMatter and the Automatic Thanking Machine (ATM), but it won’t divulge any details at this time. Whatever they do, it is likely to help cement TD Bank’s position as the most aggressive and successful guerilla marketer in the banking industry today.

Read More: Make Promos Out of Money You Already Give Away

Go guerilla. Guerilla tactics are among the most powerful weapons in the marketer’s arsenal, but they are frequently overlooked — if not completely ignored — by financial institutions. The Financial Brand has published dozens of stories celebrating the (rare) instances when banks and credit unions go guerilla.

Think outside the box. Television, print, radio and outdoor/billboards aren’t the only options to raise awareness about your financial institution’s brand. TD Bank was able to generate over 25 million impressions on YouTube alone by thinking outside the (traditional) box.

Leverage your charitable donations. Financial institutions give away billions of dollars every year to charities and civic organizations, and yet very few can point to any kind of ROI. “It’s the right thing to do,” they say. Or, “It just feels right.” But when you involve your audience in the charitable process, you can leverage your corporate giving in ways that measurably build the brand.

Tell your story. Most financial institutions do a lousy job communicating their corporate giving campaigns. They pump out a press release with a lame photo of the bank’s president handing an oversized check to some local charity, and what do they get in return? Nothing…

Give social media purpose. By incorporating corporate giving campaigns into your social media efforts, you give new meaning and purpose to these communications channels. You can make promotions and contests that engage your social media followers in ways that nothing else can.