Servus Credit Union, the third largest in Canada, has just about wrapped up its “Cash in with Your Camcorder” promotion, a make-your-own-TV-commercial contest highlighting the financial institution’s signature Young & Free Chequing Account.

The promotion is part of the credit union’s Young & Free Alberta initiative, a broad, multi-year “challenge marketing program” from Currency Marketing that has deservedly received much acclaim.

INTRODUCTORY VIDEO
An unshaven Myles Peterman, the 2009 Young & Free spokesperson, dons an undershirt while introducing the contest from his bedroom computer cam.

The Cash In With Your Camcorder contest invited residents of Alberta, Canada, between the ages of 18-25 to create 30-second video commercials about “why the Young & Free Chequing Account rocks.” Prizes included a $2,000 grand prize, and a $1,000 second place prize.

“You could buy an airport for that,” observes 2009 Young & Free spokesperson Myles Petermen says. “It would be made of Legos, but it would be an airport.”

In addition to getting cash, winners may also find their videos used in future advertising.

CONTEST ENTRY – “FINANCIAL IDOL”
This submission comes from the previous Young & Free spokester, Larissa Walkiw. The singing trio in this video uses the same stick-figure style as the video that catapulted Ms. Walkiw to international credit union fame back in 2008. With over 75,000 views, Larissa’s “The Difference Between Banks & Credit Unions” is the most-watched YouTube video in the credit union industry…worldwide. If you’re one of the few that hasn’t seen it, you should take a look.

Launched in late October, participants have been submitting their home-made commercials to the credit union. The credit union provided a “starter kit” of standard elements and other video graphics (such as logos) to help contestants with their entries.

People were able to vote for their favorite submissions on the Young & Free Alberta site through the month of November. Winners will be announced on Friday, December 4. 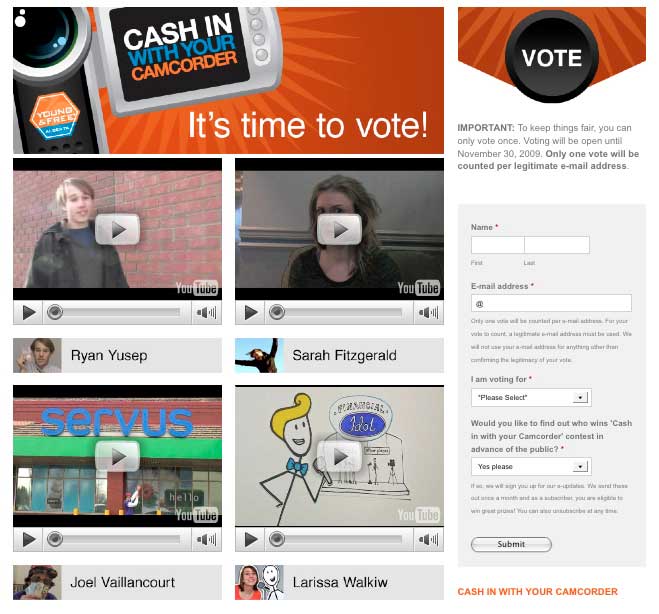 YOUNG & FREE ALBERTA MICROSITE
Shown here in the voting phase of the contest. 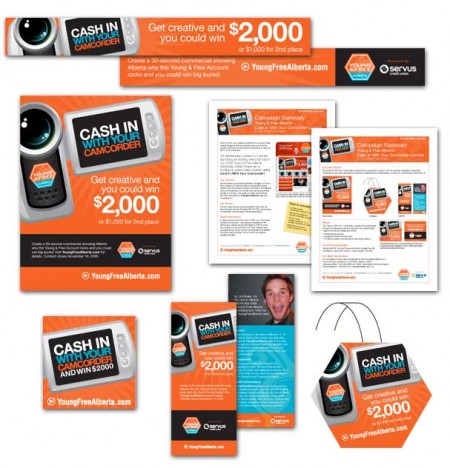 The Young & Free Chequing Account, available to the 17-25 year-old Alberta crowd, features free and unlimited withdrawals from network ATMs, account transfers, point-of-sale transactions, cheques, bill payments, and more. It is positioned as a simple and easy-to-understand product for those just starting to manage their own finances. The product is unique among Canadian financial institutions who seldom offer free chequing accounts.

There is an online application for the Young & Free Chequing Account integrated directly into the the credit union’s microsite that is so fantastically simple, you’ll have to see it to believe it.

If you’re going to hold a “make-your-own-TV-commercial contest,” there are a few things you should learn from the Cash In With Your Camcorder promo:

Bottom Line: All in all, Cash In With Your Camcorder is one of those smart contests where the winners benefit, but the credit union gains even more.