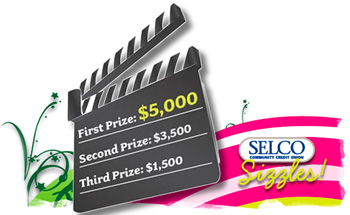 Launched back in March, the credit union said spots could be edgy, funny, bold, simple, serious, or anything in between.

And that’s what they got. The final top 10 entries selected by the credit union reflect a range of creative styles. There’s everything from safe and conservative to the slightly bizarre. You can view and vote for them at the credit union’s website.

The star is a well-cast, charismatic and adorable little girl of uncertain ethnicity (perfect!). The spot’s production is professional, with thoughtful cinematography and great editing — but it’s not too slick. The soundtrack is fresh and easy-going. All in all, good stuff.

In the Credit Union Times, Bonnie Larson, SELCO’s VP of marketing, said “We were so impressed by not only the number of entries and their depth of resourcefulness, but also by the spirit and consideration people invested in their projects.”

With $784 million in assets, 80,000 members and 13 branches, SELCO Community Credit Union has (A) the marketing resources to support such a promotion and, (B) a member base big enough to ensure a decent pool of entries. TV ad contests like this could be a struggle for smaller financial institutions to pull off properly.

The Pros of TV Ad Contests:

The low production quality of most homemade TV spots doesn’t project a very professional image. While a homemade feeling may be appropriate for some credit unions, this style could reinforce common misconceptions about credit unions — e.g., they are small, limited and not full-service.