Subscribe Now Get The Financial Brand's FREE Email Newsletter
This clever credit card campaign proves yet again why NAB is revered as the banking world’s maestro of guerilla marketing magic. 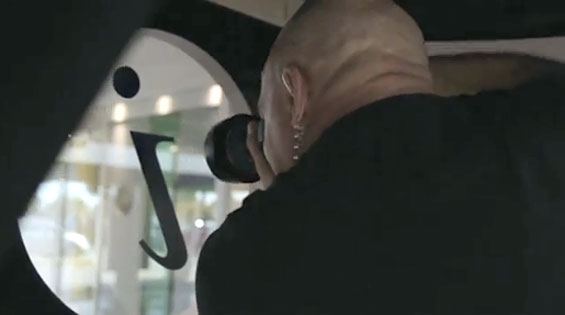 Luke, a typical Australian in his late 20s, strolls through the mall on a sunny afternoon when he stumbles upon a pair of football tickets apparently lost by another shopper. Upstanding citizen that Luke is, he takes the tickets over to the “Lost Property” desk, which (as it so happens) is conveniently situated in his immediate field of vision.

“I found these laying on the ground over there,” the virtuous Aussie explains, handing the tickets over.

“Well that’s honest of you,” says the agent staffing the Lost Property kiosk. “What’s your name?”

“Why thank you Luke!”

Moments later, as Luke continues his stroll through the mall, he sees his name and face plastered everywhere — on posters and video displays. He’s even on the news.

“Is this the new face of honesty?” asks one poster sporting Luke’s photo. A massive 20-foot display in the center of the mall screams, “Thanks for your honesty!” Luke stares at his portrait, which — at 5’ tall — is anything but subtle.

As if that weren’t enough, a baker inside the mall has decorated a cake in his honor. “Honest Luke,” it says in blue, sugary letters.

Just as Luke starts to suspect he may the victim of a prank, NAB representatives rush out to explain things. Luke, as it turned out, was one of latest unsuspecting but affable participants in NAB’s on-going series of “Honesty Experiments.”

Starting about a year ago, the bank unleashed one guerilla stunt after another, each cleverly designed to test people’s integrity (if you’re thinking about this Ally commercial, you’re on the right track). NAB set up hidden cameras to record what people did when confronted with lost wallets, dropped money and incorrect change. The payoff: “Australians are an honest lot. They deserve credit cards to match.” Followed by the tagline: “More give. Less take.” It’s a smart, coordinated marketing message.

Just like last year, the “Lost Property” gag that ensnared Luke was designed to promote NAB’s FlyBuys Rewards credit card. The scale of this year’s ruse, however, was massive by comparison. To pull the prank off, NAB needed a large support team — someone to drop the items, staff the kiosk, take the picture, Photoshop and upload the picture, decorate a cake, deliver flowers… It’s a logistical symphony that’s truly fun to watch:

NAB is using customized URLs to track the effectiveness and reach of its campaigns. For instance, on its “Lost Property” videos at YouTube, NAB links to http://nab.co/12HonYT — a coded URL for “2012,” “Honesty Campaign,” and “YouTube.” That way they can monitor how many referrals they get from their YouTube activity.

NAB, like many other savvy online marketers, has gone out and purchased its own domain for URL shortening. Rather than use popular free services like Bit.ly to shrink URLs down to appropriate size for social sharing, NAB uses nab.co. Then whenever NAB needs to create a shortened version of a hotlink (like on Twitter, where you are limited to 140 characters), they can use their own app on their own server running their own tracking analytics.

Furthermore, NAB links its promotions to dedicated sub-domains — essentially campaign portals. For NAB’s big “Breakup” campaign, the bank used breakup.nab.com.au. For another, they’re using www.nab.com.au/flybuys. This allows NAB to more easily quantify each campaign’s overall reach and impact. If all the marketing materials for all their campaigns pointed at NAB’s generic web address, they’d have a difficult (if not impossible) time sorting out where traffic came from, what was working and what wasn’t.

The web page for NAB’s “Honesty Experiments” is more than just a collection of cute videos and marketing fluff. The page is designed to do some serious selling. NAB isn’t afraid to shove a little product promotion in people’s faces — a five-frame interactive brochure for its signature credit card. There’s also a limited-time offer (10,000 bonus points in the rewards program).

NAB does a good job of staying focused — selling credit cards, that’s the goal. It’s not about making funny YouTube videos or adding Facebook ‘Likes’ or “generating online conversations.” NAB resists the urge to burden their campaigns with unnecessary social media nonsense (nitpicking: there is an extraneous Facebook poll and Twitter feed on the “Honesty” web page). If NAB’s marketing team were diehard disciples of mainstream social media religion, their “Honesty” campaign would have had no product promotion, no cross-sell, no offer, no call to action and no ROI tracking.

NAB gets noticed because they shirk convention. They go against the grain. They don’t just run some lousy ads in traditional channels. They’re mavericks. They’re different. That’s why they’ve made guerilla — not social media — the centerpiece of their integrated multimedia marketing strategy.