Subscribe Now Get The Financial Brand's FREE Email Newsletter
Visits to banking websites in the U.S. have dropped in the past year, and American institutions are lagging behind others when it comes to mobile web and app engagement.

Digital market intelligence firm SimilarWeb analyzed thousands of online sites across 200 countries, comparing the year-over-year growth in both desktop and mobile traffic between January 2015 and January 2016. The study found that global visits to online banking and finance sites decreased by 7%, with a corresponding drop in both time-on-site and the number of pages visited.

Direct traffic, where internet users visit a site’s URL directly, made up 48.9% of all traffic to global banking websites in January 2016, a 3% year-over-year increase for this type of traffic.

Search traffic made up 25% of traffic to global sites, increasing 2.1% year-over-year, followed by “referrals” (inbound links from other sites), making up 23.11% of traffic to sites.

The analysis revealed that social media was the least significant source of web traffic and referrals in the banking industry. Social media sites such as Facebook and LinkedIn plummeted in importance year over year, making up only 1.42% of traffic to banking websites. That’s a relative drop of 16.65% from the previous year.

The study found that globally, PayPal is the world’s most popular site in the finance sector, with 516.8 million monthly worldwide visits in January 2016 (combined mobile and desktop visits). In second-place Chase.com secured 168.4 million monthly visits, and Bank of America’s site (140.0 million visits). Also in the list of top ten biggest banking sites were Wellsfargo.com, alipay.com, sherbank.ru, finance.yahoo.com, Onlinesbi.com, Itau.com.br, and Capitalone.com. Noticeably absent from the list was Citi.com, even though they are among the top four institutions in the U.S. with around $2 trillion in assets.

SimilarWeb sees a correlation between the home lending market and web traffic on banking sites. When mortgage rates dramatically increase or decrease, visits to banks and credit union websites spikes. More predictably, they also see peaks in spring and early summer. Their data shows the combined volume of desktop and mobile web traffic visits crested in July 2015. Four months later in November 2015, traffic tied to home lending decreased as much as 34% for regional banks and dropped 22% for big banks in SimilarWeb’s study. 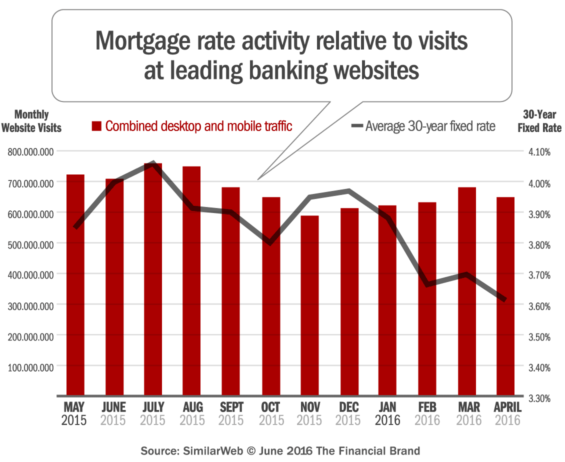 SimilarWeb says there appears to be several reasons for this. First, spring and early summer are traditionally part of the U.S. home buying and selling season. That makes sense. But in April and May of 2015, 30-year fixed mortgage rates continued to rise slightly, which probably drove many homeowners to either refinance their existing mortgages while they could still lock in better rates. SimilarWeb theorizes that this may also have helped push new homeowners to make their first purchase by locking in mortgage rates in June before interest rates continued rising to more than 4% in July 2015.

So while it’s obvious that falling mortgage rates will stimulate more activity, it’s not quite as intuitive that rising interest rates will do the same. With murmurs from the Fed every quarter about increasing interest rates, this is definitely something to keep in mind from a marketing and promotions perspective. You might toy with a rate lock promo, or seriously ramping up your paid search campaigns with Google for various mortgage-related terms.

SimilarWeb analyzed the desktop and mobile engagement rates among the biggest U.S. banks and credit unions over the past twelve months, and found that they still continue to receive more than 60% of their online customer traffic via desktop visits.

They found that while mobile approaches 50% use in most U.S. industries, retail financial institutions see only 38% of their online visits from consumers via the mobile channel (36% mobile engagement for leading regional banks and 39% for leading credit unions).

“While U.S. consumers currently access bank and credit union websites more on their desktop computers than via the mobile web, that is changing rapidly,” says Joel Zand, Digitial Marketing Insights Manager at SimilarWeb. According to their data, the U.S. lags behind other markets like the U.K. where about half the traffic to banking websites flows through the mobile channel.

The study also revealed that online users accessing their financial institution via mobile spend considerably less time on banking sites than desktop visitors. For the leading big banks, a desktop session lasts an average of 6 minutes 33 seconds, slashed almost in half to 3 minutes 33 seconds for mobile visits. 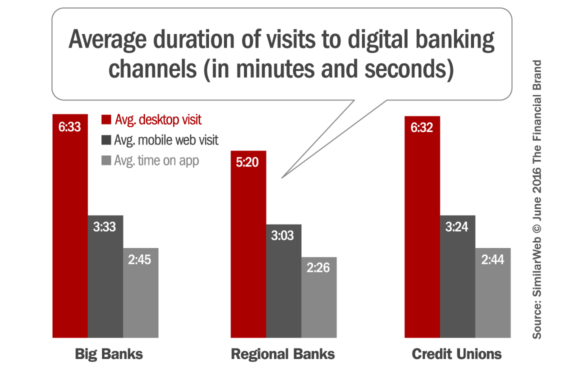 “Consumers who spend a shorter amount of time on a financial institution’s website doesn’t necessarily mean an unpleasant experience,” Zand explains. “To the contrary, customers often use their smartphones for quick activities like checking their balances or seeing whether a deposit cleared.”

For banking apps, which grew in usage by around 4% year over year, Friday then Thursday are the two busiest days of the week for app banking activity. Banking app usage is highest between 10 am and 1 pm, making late morning and lunch time the peak activity period. Mondays and Fridays are the busiest day of the week for online visits to banking websites via desktop. 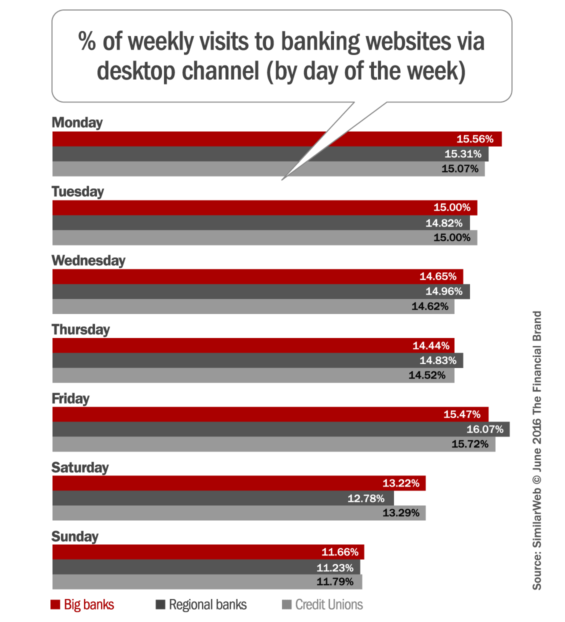 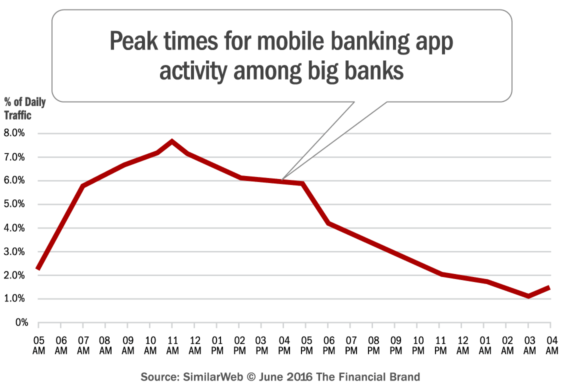 The 26-page report on digital engagement in banking from SimilarWeb can be downloaded from their website. The analysis includes 15 different charts comparing variables like mobile app activity, time spent on site, number of pages viewed, and daily usage patterns for both banks and credit unions. If you’re looking for baseline data you can use for comparisons, this is a good place to start.