ING DIRECT Australia has dumped comedian and longtime company pitchman Billy Connolly and replaced him with an orangutan named Charles.

In the campaign’s inaugural TV spot, the primate sports an orange fur and a fluffy coiffure while discussing how ING DIRECT makes him comfortable enough to get naked. The spot opens on an ape pecking away at his Apple laptop while he banks online. He stops, looks up and says, “Oh, hello. Charles. You know, when you’re with a bank that always treats you fairly, you get this enormous confidence boost. I mean I’m on national TV…naked.” To illustrate his point, Charles looks down at his thingy suggestively.

Charles may act and sound super sophisticated — even by human standards — but you have to wonder: Do consumers really want to think about an ape’s penis?

An orangutan with a past

Charles isn’t just a primate with a penchant for the provocative. Indeed ING DIRECT has worked up an entire dossier for their new spokesimian. The backstory goes deep. Charles studied environmental science while attending university. He’s a writer, photographer, and observer of humanity who can smile in 37 languages.

Apparently he’s from Melbourne and moved to Sydney five years ago, which is a bit strange since Charles is a pom with an English — not Australian — accent.

He confesses he hasn’t got the whole work/life balance thing sorted out, and he’s not sure he’s “doing this thing called ‘life’ right.” He likes organic food, gadgets, art and friends, and admits he has bad hair days.

“In short,” says Charles, “I’m probably not that different to you.”

Ummm, yeah… except for the orange fur and a few strands of DNA. 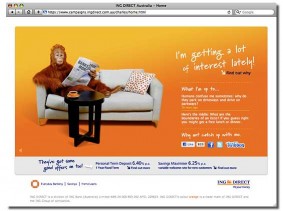 The campaign, created by Jack Watts Currie, was launched in late September. Besides TV and outdoor ads, there is a subsite, Facebook page, Twitter account and YouTube channel, all ostensibly maintained and updated by Charles.

There isn’t a whole lot going on at the subsite (not that there needs to be). There is an “About” page, links to a couple of the bank’s core products and the usual social media networking tools. Mostly, the subsite looks like it’s being used as a landing page to count clicks and track campaign web traffic — a “virtual turnstile.”

The YouTube channel has one ad for the bank’s Savings Maximiser product (the “naked” spot has been removed). There are also a couple videos showing a street team — “Charles’s Angels” — picking up people’s tab at bars, restaurants and cafés around Syndey, courtesy of Charles. The videos are slick compilations of clips with grateful Aussies saying things like “thank you Charles,” “I love you” and “you’re a legend mate!”

The Facebook page for Charles uses a similar approach as E*Trade’s talking baby. Charles sends humorous (if not irrelevant) updates about the goings-on in his life. “Can’t believe I didn’t get Lucy’s number,” says one Facebook update, a reference to homo sapiens’ famous ancestor. Another reads, “Tired and emotional now. Time to give pizza chants.” It’s lighthearted for sure, but there are many Twitter users who find such mundane tweets annoying.

There isn’t anything in the @charles_writes Twitter stream that you won’t also find at the Facebook page. Charles double-posts the same information in both his tweets and his status updates, which may explain why the Twitter account has fewer than 100 followers while the Facebook page has over 800 fans.

Only about one in every ten things Charles has to say includes an offer or comment with any relevance to banking. Most of the stuff Charles shares are random, miscellaneous thoughts: “Humans confuse me sometimes. Why do they park on driveways and drive on parkways?”

Reaction ranges from “creepy” to “creative”

Public reaction to the naked simian ranges from “creepy” to “funny,” with more people leaning towards the “creepy” camp. When an Australian advertising blog covered the campaign, readers’ comments about Charles included adjectives like “bizarre,” “disturbing,” “strange,” “scary,” “unlikeable” and “WTF?”

Some Aussies are nostalgic for ING DIRECT’s previous spokesperson. But it’s not that the TV ads with Scottish actor/comedian Billy Connolly were amazingly awesome so much as they just weren’t as weird.

Key Takeaway: Anyone can make an ad that gets noticed by doing something strange or unusual. Not everyone can build a great brand by differentiating in a relevant way.

What do you think? Is Charles on-brand for ING DIRECT? Or is he just a gimmick?